Nightwing is one of my favorite series right now for the New 52 and it is one of the best tie ins for the Night of Owls story arc. This story has been building up in the series since issue 1, and now that the story arc is finally here we get to find out how Nightwing is really connected to the Court of Owls. 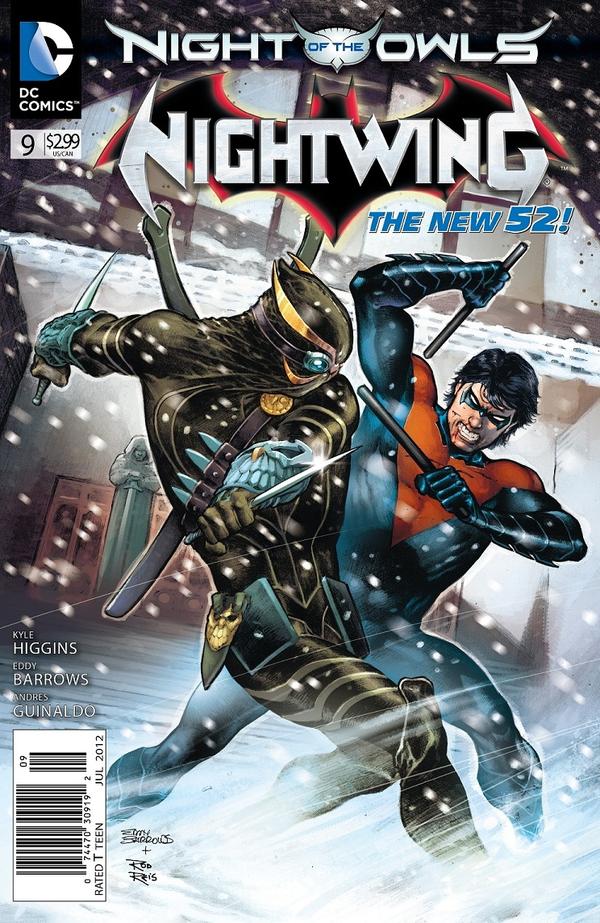 The cover for this issue was great. It showed that it was a Night of Owls tie in so people reading Batman may give this series a chance. The art was great for this issue also. It was a very clean-cut cover, and the snow gave the action a great effect. This was definitely my favorite cover for the week.

In this issue William Cobb, Nightwing’s great grandfather and a talon, comes and pays Nightwing a visit. We learn more about William Cobb’s past and how he is connected with Dick Grayson.

I thought this issue was a great continuation from last issue’s Night of the Owls tie in. We learn more about William Cobb and his motives and why he became a talon. It is an interesting story, and I personally loved learning more about this villain. I don’t read Batman, which is the main series for the Night of Owls, so I was glad to see that you can still understand this tie in without reading the main series for Night of Owls. If you are a Batman reader than you can learn even more able William Cobb through out this issue than you do in Batman.

In this issue, we find out how Dick is connected to William Cobb. William Cobb is Dick’s great-grandfather. William keeps trying to convince Dick that he had a destiny to become a talon, but now he is just living in the shadow of Batman. We see what Dick could have been if he wasn’t taken in by Bruce when Dick was a boy. Everything that was building up from issue 1 about Dick’s past was reiterated in this issue, and we find out more of what could have been. 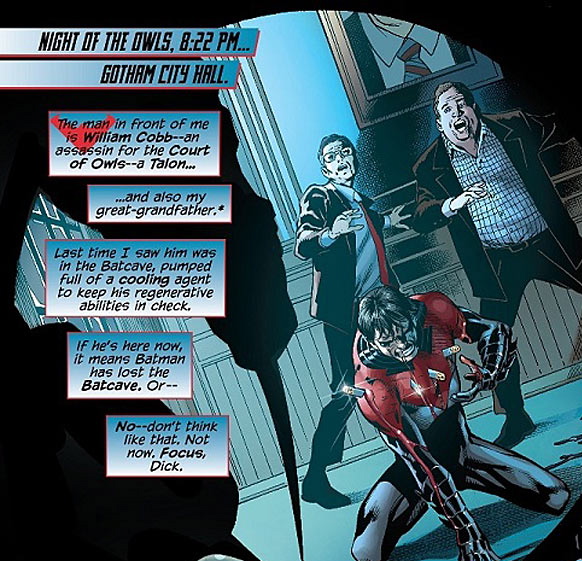 The one problem in this issue was that there was not much that happened to continue the Night of Owls story. As I said we learned more about William Cobb and his past, but this doesn’t really progress the story. If you look in the point of view of story progression than all that really happened was that Nightwing and William Cobb had a fight.

The art for this issue was perfect for this story. It was dark just like ever bat title should be. It also work perfectly for all of the action in this issue. Great art and I hope that this art style never changes for this series.

Pick up this issue! It was a great tie in for the Night of Owls and we learn a lot about William Cobb that we wouldn’t have learned in other bat titles. If you want to start reading this series I recommend you pick up the last issue that way you wouldn’t be lost in this issue.