Despite being burdened with being a show on The CW, Nikita has been so consistently impressive it's starting to become ridiculous. The show has managed to keep a coherent plot throughout so many twists and turns, all the while throwing action and espionage in our faces to the largest extent possible. All season long we’ve been building to this week and despite the grim outlook for the close to the season as of last week, the finale is now set up to be great.

After being “discovered” as Nikita’s mole last week, Alex is well and truly in at the deep end. Being tortured for information seemed like the obvious route and it played out that way for a few minutes, but then the show took the first of many unexpected twists. Throwing Amanda out of the room, Percy began to give us a wealth of information from left, right and center. Essentially, Division isn't all that important, a group called Oversight runs them and Percy has a master just like everyone else. Whilst that revelation wasn’t exactly shocking as Percy gets deeper into what exactly has been going on recently, the show just about hits its peak.

While all of that is going on there is a mission for Nikita; following the deaths of several cryptographers capable of decoding her black box, she must save a CIA analyst before he is the next victim. Despite generally being some of the better parts of episodes, the action-heavy section felt a little stale to me. Whilst there was some extremely nerdy use of speakers and a television remote to distract the bad guys, I just didn’t care much for what was going on. At this point in the show we kind of get what is going to happen when these situations arise: either Nikita will destroy her enemy and leave unharmed or they will put up a mild fight before she leaves unharmed. The lack of peril in the situation kind of makes it all feel just a little redundant. You might argue that Alex’s predicament is enough for the episode to keep you on the edge of your seat, but it seems that the writers missed a trick in totally amping up the whole episode. If everything starts to go terribly wrong instead of just this and that, we’re all far more inclined to be coming back for the finale, right?

Either way, Nikita gets her man and goes about her business whilst sending Michael to check on Alex who is still at Division. After being played by several staff members, Michael finally comes across our child hero before being forced to turn a gun on Percy in an attempt to break them both out of the building. Sufficed to say, I suppose the writers may have listened to what I said before and Michael’s plan fails and now he too is “exposed” as a traitor. As if the quotation marks hadn’t already told you, Percy then proceeds to hand us the aforementioned information about recent events. Essentially, he has known about our rag-tag team of protagonists for a while now and he has been playing them to enact a plan of his own to take the top spot on the intelligence service ladder. Knowing that she’d have no other choice than to hand her black box over to the CIA, Percy allowed Nikita to capture one of them and has done something to it (we're not exactly sure what yet) that is going to make him King. The episode concludes with Alex – freed after agreeing to turn against Nikita because she has learned that she was the one that killed her father – and Nikita heading into a trap. There is the ever so cliché use of a gunshot and fade to black as we are left to ponder whether Alex has just shot her former mentor or whether it was just some kind of warning shot, which amazingly was kind of cool. 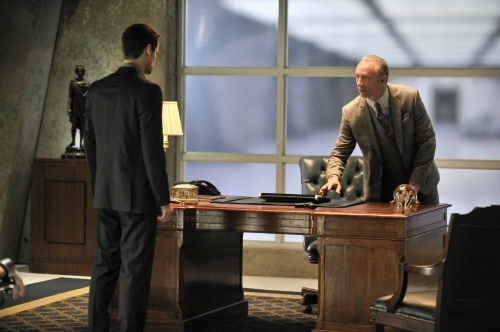 I was worried last week when things turned out as they did since I really couldn’t see any realistic way out for our heroes and after this week was over and done with I can safely say that I was wrong to feel that way. Not because the writers have woven some amazingly intricate plot (at least not one that has been alluded to yet) but because it seems that maybe it isn’t all geared up to finish nicely. With neither a pick-up or a cancellation confirmed as of yet, the show has somewhat been backed into a corner as to what it can do. If the show were outright cancelled then it would be easy for the writers to go all out and have Nikita die, and if it has been absolutely renewed then it would be similarly easy for our heroes to somehow get away with it, but at the moment it isn’t remotely clear what is happening. If they get the renewal that they’ve worked hard for then it would be good to see the back of Division and have Nikita switch focus to Oversight. But only time will tell what is to become of this show. Either way this was a particularly strong episode and we can only speculate on what it is all leading towards.