As of 7:00 tonight, Nintendo has shut down any and all online functionality for Swapnote for the Nintendo 3DS.

Nintendo’s reasoning behind the shutdown was that certain people, mainly minors, were “exchanging their friend codes on Internet bulletin boards and then using Swapnote (known as Nintendo Letter Box in other regions) to exchange offensive material.” Apparently some users were drawing some naughty things and sharing them to minors, and since Nintendo doesn't filter them like they do Miiverse posts, they have no control on who gets what.


If you don’t know, Swapnote is a free app that allows users to draw pictures, upload real pics and small audio clips and send them out either through StreetPass or online only if you had their Friend Code. Nintendo developers and execs would upload a note for public viewing once in a while discussing their latest games and give readers more stationary to draw on.


While it is understandable that Nintendo wants to protect themselves from negative publicity or lawsuits, it sucks that one of the best things to happen to the 3DS is forever gone. Sending notes via StreetPass to friends can still happen, but it is worthless since you can just show them in person (can’t send them to strangers). I used it once in a while to say hi to friends I haven’t heard from for a while (or vice-versa) or read the neat things Reggie, Miyamoto or other Nintendo celebs would say.


Swapnote also had one of the neatest mascots in recent Nintendo history, a simple young lady named Nikki. Her and her cat were the regular authors to Nintendo’s posts, and it’s sad to no longer see her posts. 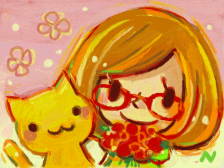