By: Mitchel Broussard | Movie Reviews | June 26, 2014
There is something that is endlessly watchable about the 61-year-old Liam Neeson butt-kicking action flicks that sort of glosses over how mediocre of a film they sometimes are. I missed out on a few, but I think I am along for the ride for good now. Non-Stop, the newest in the grizzled, old grandpa superhero franchise is big, loud, and insanely dumb. It is also way more fun than it should be. Bill Marks (Neeson) is an Air Marshall getting ready for a non-stop from New York to London by getting a buzz on in his car beforehand. He is an alcoholic, and is drunk for a majority of the movie, but he is also Liam Neeson. He helps calm a scared little girl traveling alone before the flight leaves and, despite his inebriation, is pretty much the only voice of reason on the entire plane. The movie desperately wants us to believe it will pull out a third act twist revealing he has been the terrorist the whole time, but it just does not work. 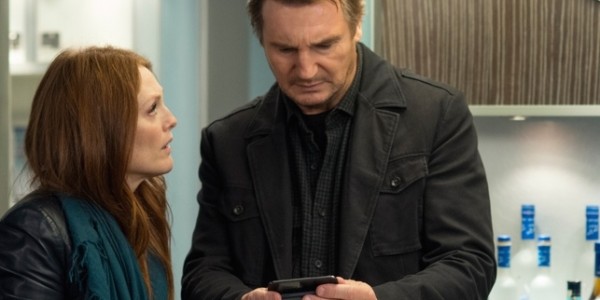 Thankfully, there is a 767 full of interestingly suspicious people who could be the one sending Neeson dangerous threats on a secure Air Marshall line. The demands? Deposit $150 million into a specific account or see a passenger die every twenty minutes. The suspects include Julianne Moore, deftly playing Neeson’s seat mate, infusing her character with enough secrets and half-truths to throw us off. There is another Air Marshall with a suspicious package (Anson Mount), a couple of flight attendants, one of whom has mysterious history with Neeson (Michelle Dockery and Lupita Nyong’o), an overly friendly stranger (Scoot McNairy), a hot-head cop (Corey Stoll), and a whole bunch of side-players that all get their five minutes of the audience going, “Oh, it’s them!” 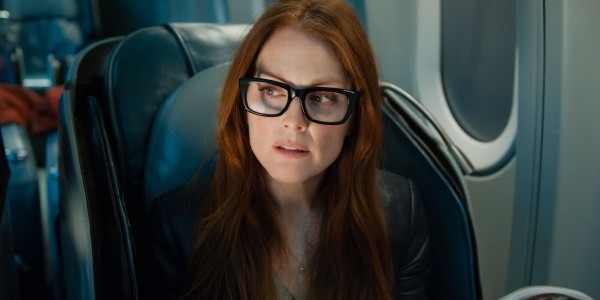 And it all flies along without much turbulence because of this Agatha Christie-esque conceit. There are claustrophobic fights in airplane bathrooms, cleverly executed kills, and enjoyably hokey dialogue delivered by grade-A actors. And, of course, unlike the audience, everyone on the plane does believe Neeson to be the terrorist. The drama that unfolds as he, drunkenly, attempts to convince a couple hundred terrified people that he is trying to save them is surprisingly engaging. But then the killer metaphorically takes off his mask, and everything sort of deflates. The movie moves along for eighty or so minutes at such a confident clip, you begin to believe it can actually pull off a clever finale. It does not. The culprit’s identity is disappointing, their monologue is achingly stupid, and their motivations behind it are doubly so. It is more likely to invoke an eye roll out of you than a gasp. It wants to be political and topical, but thanks to a heavy-handed dose of 9/11 references, it just comes off as silly. 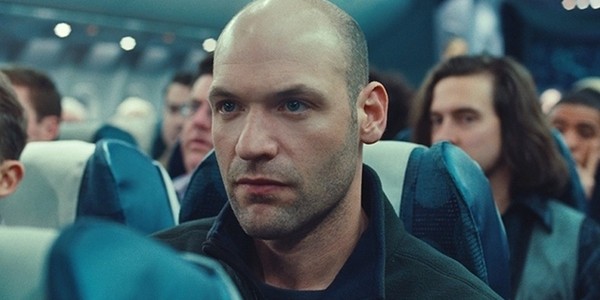 The spike of action after the reveal is obnoxious and improbable, but entertaining nonetheless. But it just makes you remember how good the movie was when it was just Neeson endlessly making his accusatory way through the plane, like a live action Colonel Mustard going from one place on the board to another until all the required clues were assembled. In those scenes, Non-Stop soars. Thankfully, it is easy to forgive the movie of its inability to stick the landing when there is so much fun to be had while it is flying high.
Rating
7.0
Pros