It’s been a while since I started off a review talking about the art of a book, but that’s exactly where I will begin with Nonplayer. The pencil’s and color are breath-taking. They are so beautiful that the story and dialog become almost an annoyance while reading it. The different character designs and just the designs in general are very cool and different than a lot of comics. The coloring gives the book a very realistic look with perfectly colored forest canopies and a very animated look to it. Think Spirited Away, but more so for adults.

So what’s this book about? Well it opens with a Scout on a Dinosaur-type horse riding ahead from its troops to make sure that the path is clear. From there it pans to a huge Elephant-esc creature carrying a King and his Queen. The King tells the Queen that he had to kill one of his best soldiers to defend her honor. The Soldier claimed that he heard noises from her the night before and then saw something un-natural leave the tent. From there we see two characters plotting an attack on the carivan of soldiers. They speak as if they are already defeated and that the attack is a suicide mission. They also speak in a manner that implies that it’s just a game to them. 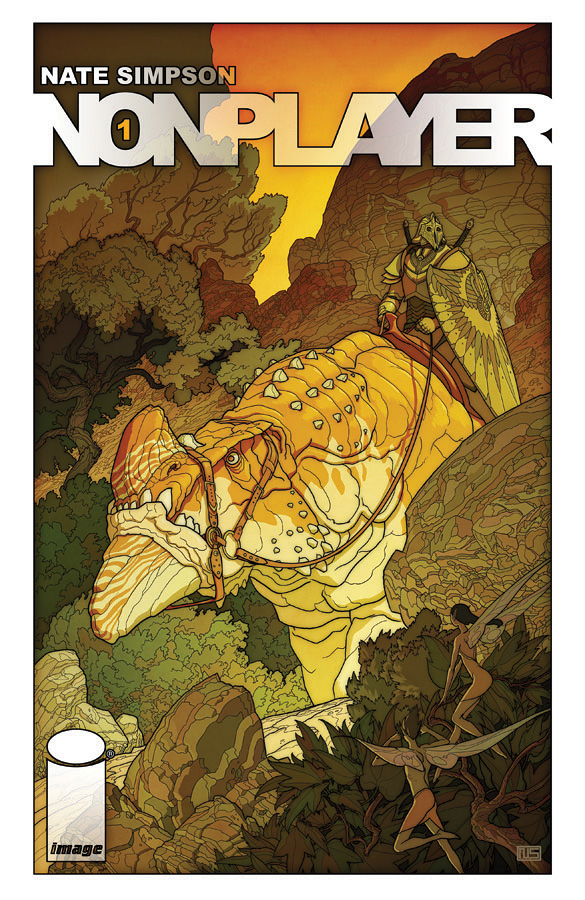 They attack the troop and bring down the King and Queen’s transport. The Queen is knocked out and the King must drag her from the wreckage. One of the characters (a red headed girl) goes to town on the troops cutting them down until the King becomes involved. Her companion an Elf joins the battle and saves her from an attack from behind. Eventually, both characters die and they are transported back to their hub. The red head then leaves that hub and wakes up in the real world. A game within a game if you will.

I’m going to take a bold guess that the “non-playable characters” are actually real and that when players going into their world they’re actually killing people and don’t even know it. Even if I’m wrong this book was pretty damn good. All the pieces aren’t there for the story yet, but writer/artist Nate Simpson does what a first issue should by establishing the setting and world for the story to happen in. The “game” is in a Lord of the Rings-esc setting, but the real world is a futuristic setting full of trash and robots.

In general this book has an interesting mix of action and story with that one big question looming in the air… what’s real and what isn’t? The story isn’t as strong as the art, but I think that the visual storytelling makes the book more than worth it to pick up. If Nate Simpson isn’t already being scouted by other companies, he will be by the time this series is finished. Also if you like WOW you should probably just get this book for that reason alone.