It is going to be a titanic battle for the top of the box-office this weekend: there are five major competitors in wide release and something will have to fall by the wayside. The cop thriller End of Watch has an excellent critical reaction, Dredd 3D has the edge of a 3D release and Clint Eastwood’s Trouble at the Curve has the widest release. And our Pick of the Week is … What’s It About? In the 1950s an intelligent, charismatic war veteran, Lancaster Dodd (Phillip Seymour Hoffman) forms his own faith-based organization to find the meaning of life and becomes known as “The Master”. A young drifter, Freddie (Joaquin Phoenix), joins the organization and slowly becomes The Master’s right hand man.

Early Reaction: The Master won the Best Director and Best Actor prizes at the Venice and could have won the Best Film prize if rules did not prevent it from winning more then two prizes. It also broke the record for highest per-theater average income for a live action film, making $147,262 per theater.

What to Watch For: The return of Joaquin Phoenix after his “break down” and another film from one of the most celebrated directors around, Paul Thomas Anderson. It is already set to be one of the big contenders for the upcoming awards season. What’s It About? In the future most of the Earth is an uninhabitable desert and Mega City One is a chaotic, lawless place. The Judges are the only form of law enforcement and the best of them, Dredd (Karl Urban, Star Trek) is assigned to assess a new Judge, Anderson (Olivia Thilby, Juno). But when they enter the Peach Trees Tower Block they end up being trapped by the vicious crime lord Ma-Ma (Lena Headey, Game of Thrones).

Early Reaction: Dredd 3D impressed fans when it screened at this year’s Comic-Con and has been praised for being a loyal adaptation of the source material, including here on Player Affinity. It topped the Box Office in the UK.

What to Watch For: R-Rated sci-fi violence back on the big screen where it belongs and a faithful adaptation to a beloved comic book series. 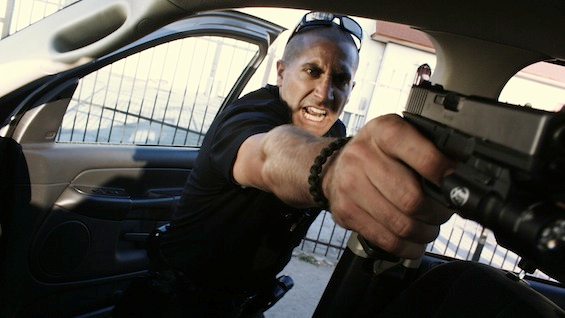 What’s It About? The streets of Los Angeles can be a battleground and two LAPD officers (Jake Gyllenhaal and Michael Peña) are marked for death by a cartel after they discover and confiscate a small cache of money and firearms during a routine traffic stop.

Early Reaction: The critical reaction has been very strong and earned high scores from top critics like Roger Ebert and Lisa Schwarzbaum.

What to Watch For: The return of writer/director David Ayer to the mean streets of LA in a gritty, action packed police drama. House at the End of the Street

What’s It About? A mother and daughter, Sarah (Elisabeth Shue) and Elissa (Jennifer Lawrence,) move to a small upscale rural town to the house of their dreams. But it turns out that one of the town’s residents harbors a dark secret.

Early Reaction: There are been a few reviews so far and the vast majority are negative, chastising the horror movie for being a muted PG-13 and having a much better cast then it deserves.

What to Watch For: It’s the obligatory horror release that comes out when a young actress becomes a big star and it will be your last chance to see Jennifer Lawrence in pure schlock. Trouble with the Curve

What’s It About? Trouble with the Curve is both a sports drama and the story about a father and daughter as a baseball scout with (Clint Eastwood) goes on a scouting trip and his daughter Mickey (Amy Adams) quits her job to help him.

Early Reaction: While the reviews have not been terrible, the general reaction can be described as lukewarm and middling.

What to Watch For: The return of Clint Eastwood to acting since his “retirement” after Gran Torino. The Perks of Being a Wallflower - The Perks of Being a Wallflower is a coming-of-age story, based on a novel by Stephen Chbosky that he adapted himself. Focusing on a trio of outsiders, Charlie (Logan Lerman) is a high school freshman who forms a friendship with two seniors, Sam (Emma Watson) and Patrick (Ezra Miller). (Metacritic 65/100, Rotten Tomatoes: 76%, Player Affinity 8.5/10) – Summit Entertainment


Unconditional – Lynn Collins (John Carter) stars as Samantha Crawford, whose life is shattered when her husband is killed in a senseless act of violence. It takes a chance encounter with two children and a reunion with her old friend to change her life. (Metacritic: N/A, Rotten Tomatoes: 40%) – Harbinger Media Partners About Cherry – An ensemble cast featuring the likes of James France, Dev Patel and Heather Graham star in this drama about an 18-year-old high school student, Angelina (Ashley Hinshaw) falls into the world of pornography in San Francisco. (Metacritic 33/100, Rotten Tomatoes: 10%) – IFC Film

You May Not Kiss the Bride – You May Kiss the Bride is a romantic-comedy about a pet photography (Dave Annable) who is forced onto an adventure when his bride is kidnapped on their honeymoon. Warning, this film contends Rob Schneider. – Hawaii Film Partners