Chip-maker Nvidia has announced a new processor destined for mobile devices that it says will offer better graphics than that found in the Xbox 360 and Playstation 3. It was announced during it's presentation at CES that the new chip dubbed "The Tegra K1 features 192 GPU" will be based on the same Kepler technology used in the US firm's high-end PC components.


Nvidia demonstrated the chip running Epic Games' Unreal Engine 4 at the Las Vegas event and claimed that the new chip will help Nvidia compete against Qualcomm and Samsung for orders from manufacturers. The hardware and software company was beaten by rival AMD for the contract to make the graphics chips that power the recently released PlayStation 4 and Xbox One consoles which offered a huge market for last Christmas and Nvidia illustrated the jump in the quality of real-time animation graphics made possible by the new chip. 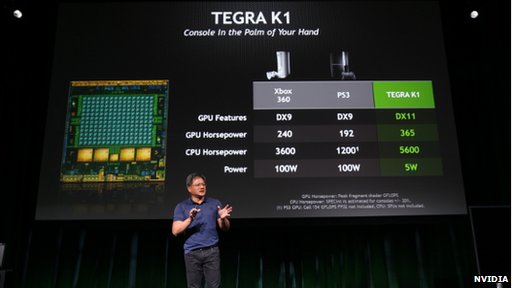 Nvidia's current generation Tegra 4 mobile chips - which feature 72 GPU cores - are used by Microsoft's Surface 2 tablet, Asus's Transformer Pad Infinity hybrid, the Toshiba Excite Pro tablet and Xiaomi's Phone 3.
California-based Nvidia's chief executive Jen-Hsun Huang described the Tegra K1 as offering next-generation graphics to mobile devices "for the first time" when he announced the news at the Consumer Electronics Show.
He noted that while the chip outperformed the last-generation consoles, it required just 5% of their power.
He added that it would be released in two variants: one with a quad-core Cortex A15 CPU (central processing unit) designed by the British firm ARM; the second with Nvidia's forthcoming dual-core Denver CPU, which is a customized version of ARM's more powerful 64-bit V8 architecture.
This is a hug step forward and could even lead the big companies in the mobile device market to adopt the new architecture, if it is as powerful as reported. 2014 looks bright for Nvidia and their graphics line up only boots their potential in the gaming market.