Every summer New York City hosts an off-off-Broadway theater festival that produces 200 plays in two weeks.  The Fringe Festival targets young and hip audiences, so it shouldn’t be surprising to find some comic book and video game themed shows like The Custodian: A Superhero Comedy written and Directed by Will Lacker.

It’s founded on the premise that if there were superheroes in New York, then someone would have to clean up after they fight each other.  It’s a funny idea, but one that wasn’t explored well in this play.  Mostly the show explores the relationships of a group of ordinary roommates who happen to live in a city where superheroes exists.

In The Custodian, Max (Played by Eryck Tait) is unemployed and shares his apartment with a video game addict Remy (Nick Hepsoe), and eventually the two are joined by Fing (Adam Delia) Remy’s childhood friend who spent the last few years living in the jungles of Uganda.  Shortly into the show, Max’s girlfriend Wanda (Laurel Hepsoe) gets him a job as a janitor, where he finds himself constantly cleaning up after superheroes crash into the building where he works.  Eventually, after the constant battles of the superheroes threaten his home, and girlfriend, Max decides that he’ll have to put a stop to the heroes.

Unfortunately, it takes a very long time for any of this to play out.  The show runs two hours including intermission, and plods along spending most of its time as a mismatched roommate comedy.  There isn’t much of a plot until the end of the first Act when Max and pals decide to do something about all of the superheroes making a mess of their town, and then it takes the entire second act before Max makes his inevitable transformation into a supervillain. 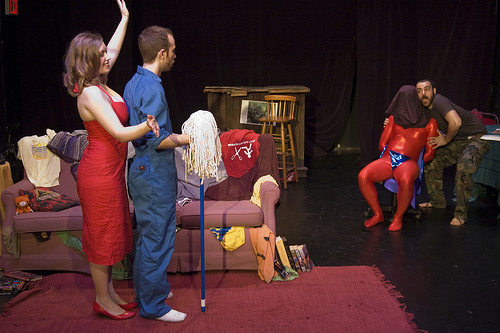 The superhero angle isn’t worked in very well.  The entire show is set inside Max’s apartment, and no superheroes show up onstage until the end.  Even then the only superhero the audience ever gets to see is one lowly sidekick.  There’s lots of talk about exciting things that happened between scenes, or are going on outside the window, but the audience doesn’t get to experience any of this.

If the playwright is a genuine comic book fan, it doesn’t actually show up in the play.  There aren’t any insider jokes for comics fans to get, but rather the heroes referenced in the dialog are based on characters from blockbuster film franchises (Manbat and Sparrow, The Bulk, The Green Canteen, and Corporal America).  No knowledge of comic books, or even an appreciation of them is needed to understand this super-powered world.  The theme of arrogant superheroes making life hard for the little guys is a little reminiscent of “Kingdom Come” or “Squadron Supreme”  but I suspect that this is unintentional.

While it doesn’t do much to deconstruct the Cape & Tights genre, it’s serviceable as a comedy about three wacky roommates.  Max, Fing, Remy and Wanda have occasional funny moments, especially Fing. Kevin Alan also stands out in multiple roles as a DJ, a Professor, a Hispanic janitor, and a right wing talk show host.

The Custodian has three more performances as of this writing.  More about it can be seen on the theater company’s website.  Check back with Player Affinity over the next two weeks as we review all comic book and video game shows in the Fringe Festival.