The New York City Fringe Festival gives us hundreds of artsy new plays every year.  But this year, it’s also giving us boobs.  Boobs attached to women dressed like characters from Star Trek and Star Wars.  You can see these naked space women in a Burlesque/ Comedy show called The Star Debate: Trek VS Wars.

There are numerous theater companies producing nerd burlesque in New York City these days, but Epic Win Burlesque, the people behind The Star Debate have a good angle for their show:  Two nerdy men debate whether the Star Trek franchise is superior to the Star Trek Franchise, while hot chicks dressed up as characters from both franchises do sexy dances to serve as evidence. 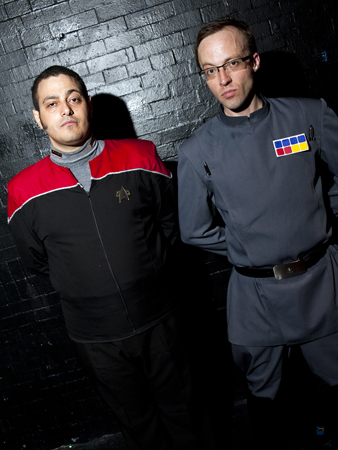 While it is merely a thin excuse to show nubile women in metal bikinis, it’s also quite funny, and delivered with an authentic fan voice by hosts Nelson Lugo and Shaffer The Darklord.  There’s actually a lengthy introduction as the two fully-clothed men debate the merits and flaws of Star Trek and Star Wars.  Lugo passionately speaks about how “Star Trek cares” about its fans, while George Lucas cast aside his fanbase.  Shaffer on the other hand points out that the success of Star Wars paved the way for the last three decade of Star Trek (Which are arguably superior to the original series).  Many more earnest arguments are offered across the course of the hour-long show.

Once the dorks have had their discussion about hard science fiction versus science fantasy, a series of women come out and take off their clothes.  Most of the dancers are full of tongue-in-cheek humor, treating the show as an opportunity to have fun and be silly and sexy at the same time.  I was particularly impressed with Mary Cyn’s impression of Commander Data who was bewildered by this human concept of “Burlesque”.

Other dancers focused on more serious burlesque, and their acts were only loosely related to sci-fi, such as Nasty Canasta’s fan dance to the Imperial March from Star Wars.  But who’s going to complain about continuity when there’s a naked woman onstage clad only in feathers?  Prudes beware though, there is full nudity in some of the acts, like Nasty’s.

Equal voice was given to both side of the argument, with Lefty Lucy dancing to the Star Trek theme song (Complete with a tiny Constitution-class starship as a headdress), and Victoria Privates giving the audience her interpretation of a Vulcan in the midst of Pan-Far the Vulcan mating season.

On the Star Wars side audiences got both a naked Queen Amidala courtesy of Magdalena Fox.  Obviously, no geek sex fantasy could be complete without Princess Leia in her slave outfit (Dancing to Britney Spears “I’m A Slave 4 U”), thanks to Rosey La Rouge.

Each performance of the show has a slightly different group of dancers, so the dancers at this particular showing may not be present at the remaining shows.  There are at lease four other dancers on the roster, including a male dancer dressed as Han Solo for ladies lucky enough to attend the right performance.

It’s a fun and sexy show, and obviously not aiming for the sort of intellectual enlightenment that is found in most other Fringe Festival productions.  It’s tame enough to bring a date to (Probably not the first date, though), and it definitely delivers exactly what it promises.  Hot nerd girls who know what a midichlorian is.