Toy Hunter is a reality television show airing on The Travel Channel that follows Jordan Hembrough as he searches the country for vintage, rare and valuable toys for the collectible company he founded in 1998, Hollywood Heroes. During the two seasons of the show, Hembrough has canvased flea markets, estate auctions and private collectors looking for pieces of interest. In each episode, Hembrough will also give some background and history of the rare toys he finds, discussing how and why they're valuable (or not valuable).

During New York Comic Con, I had the chance to interview Jordan Hembrough at his Hollywood Heroes booth. 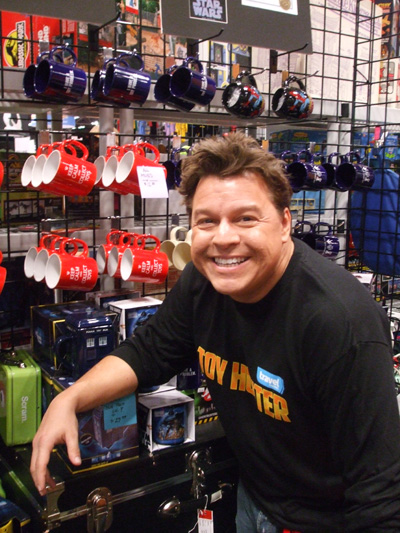 Jordan Hembrough: I definitely think the coolest thing is when you're actually able to sell something to someone who is getting back a piece of their childhood. And they look at with that incredible look of wonderment and awe. You're sitting there selling to a 45 or 50-year-old man, and he's all giddy like a 12-year-old child again.

Conversely, the hard part is when I actually fall in love with the toy as well and I've already got a buyer for it. It's hard getting rid of it sometimes, but that's part of the job. You got to do it.

JB: That reminds of one of the things I like about the show, which is seeing toys that I had when I was a kid and had forgotten about. Do you think that that kind of nostalgia is a part of the appeal of the show?

JH: I think that is an incredible part of the appeal of Toy Hunter. People come up to me all the time and they say "I see your show on Travel Channel. I love it. I love looking at all the toys that I had when I was a kid." And what I'm actually finding is that them remembering and having that memory of the toy is actually becoming an incredible bonding experience with their children. So now you have all these older viewers who are showing their children all the toys they had when they were kids.

And what's happening is that Toy Hunter is actually becoming like this family show, where people kind of gather around the television on a Wednesday night, or whatever night of the week it's on, and with a big bowl of popcorn they sit and it's this one big happy memory. I feel good about that. I like that.

JB: On the show, the finding of the toys is the big thing and it's less about the negotiating. Is that kind of accurate, or do you sometimes have to be a harder businessperson when you're trying to make a deal?

JH: You know, it's a give and take. I think a lot of it has to do with the editing, for one thing [laughs]. You know, a lot of it is negotiation but for the show I really wanted to focus on the toys and highlighting them. A big thing you're going to see in season 3 is we're really going to start highlighting the collectors and who these people are who are collecting these toys and why they're doing it. And we're going to start getting into their past a little bit. That's an interesting twist that we really haven't touched upon too much in the past. So that's something that's going to be new for season 3. 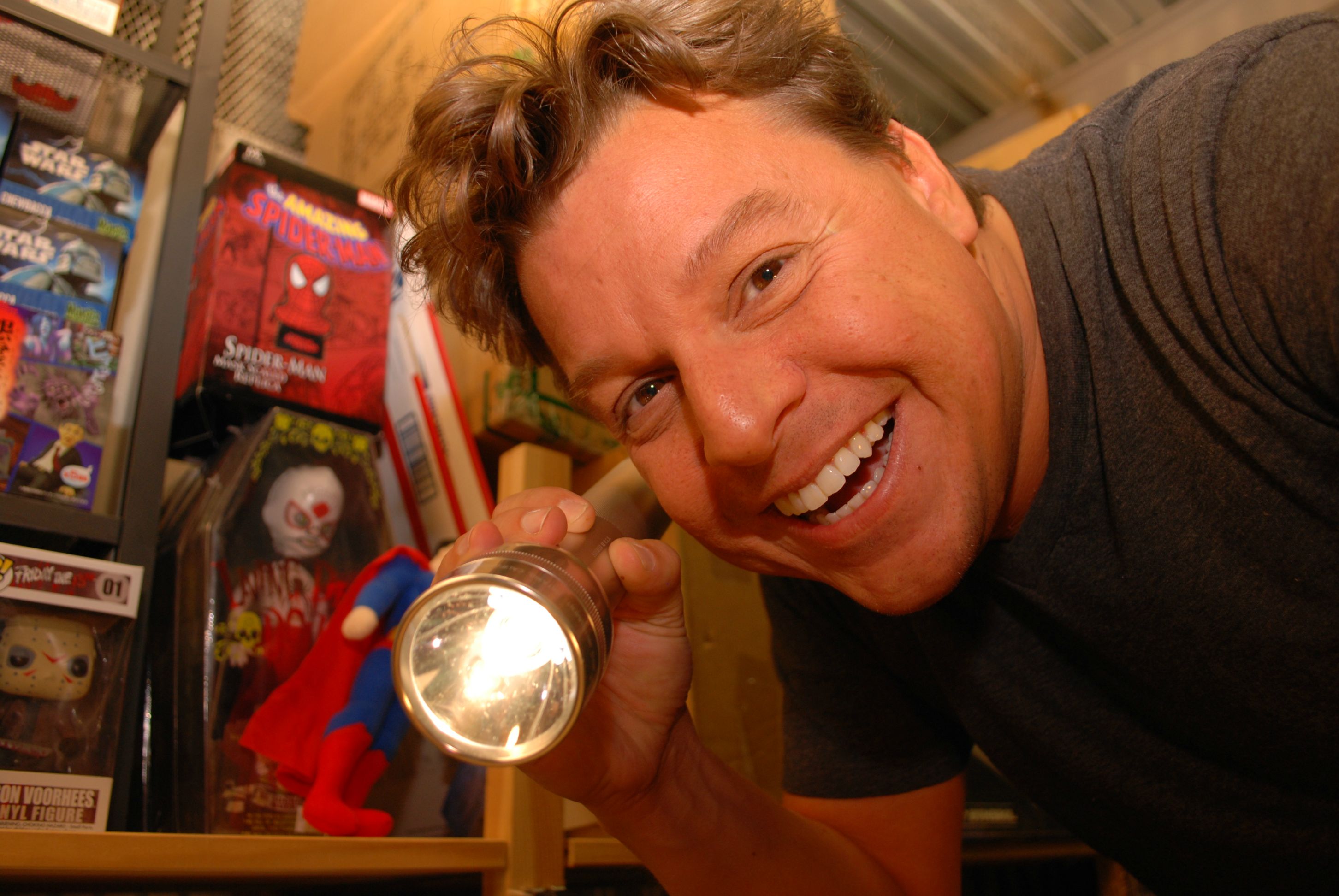 JB: One of the other big things is that you've had celebrities on in the past, like Gene Simmons. Is that going to be another part of the show going forward?

JH: Yes, celebrities – a lot of folks really enjoy those episodes when we have Gene Simmons on or Danny Bonaduce or someone famous. Sunday night, October 20th, we're showing an episode with Kirk Hammett from Metallica, who is an incredible horror collector. And what we're going to be doing is we're going to be filtering in a lot more celebrities for season 3, as well. So you're going to see a lot more famous people that you know, and they're going to be popping up on Toy Hunter.

JB: Are there any toys that are valuable but aren't especially rare? So someone might actually have it but not realize it?

JH: It happens all the time. Really, the thing that happens more than anything is toys are rare but they may not be valuable. A lot of people are sitting on these figures that are not around. Like, there's M*A*S*H* figures. Okay, here's a perfect example. M*A*S*H* figures from the TV series in the 70s – Alan Alda, Loretta Swit – they're really hard to find. The problem is they're really not worth that much because nobody wants them.

So you can have people coming up to you and say 'I've got these rare figures and I've never seen them before. They must be worth millions.' And unfortunately you have to sit and tell them that, you know, if the demand is not there, unfortunately your profits are not there either.

JB: Does that change throughout time? Is there sort of a demand for certain toys in the past and now there isn't? Or is kind of uniform, like the demand pretty much is always the same?

JH: No, you actually hit it right on the head. The collectible world, the collectible market, is very cyclical. It comes in cycles. You know, what's hot now can not be hot five years from now, and it can do this ebb and this flow. Star Wars is a great example. It was so hot back in the 90s, it was on fire. In the early-2000s to mid-2000s, it started cooling down a lot. Now, it's starting to get really hot again with Disney acquiring Lucasfilm and the new movies coming out again. It's really fueling that passion again on the collector market. So we're seeing that get very, very hot again.

JB: So are there any sorts of holy grails for you? Like a toy that you've always read about but have still never seen?

JH: Yeah, there is. There's a lot of them! You know, it's funny. I said all during season 1 that I was looking for this Batman utility belt and I just found one, so I think I'm going to start hunting for that one, too. There's a million of them [holy grails] out there. I'm going to try to hunt them all down if I can.

JB: The utility belt – is that going to be on the show?

JH: I don't know yet. I'll tell you what. If I find it and I can negotiate a deal, it'll be on Toy Hunter.

JB: So sometimes it seems like you have a kind of rivalry with other toy dealers. Is it really a very competitive industry? Or it a little bit more like you know the people and get along with them?

JH: Well, you're probably talking about Mark [laughs], who's my friend. Mark and I have been friends for 25 years. The rivalry we have is a very friendly rivalry. It's like brothers. However, this is a very competitive market because the toy business – it is a business. It's about getting to the toy first and negotiating a deal with the collector. Fortunately for me, my relationship with a lot of the dealers is very, very pleasant and I hope to keep it that way.

JB: Excellent. Thanks for your time.

Toy Hunter returns with a one-hour Halloween special on Sunday, October 20th at 8pm ET/PT. In the episode, Jordan goes on a search for scary horror toys in preparation for the HorrorHound convention in Ohio. Also, Jordan assists fellow toy dealer Mark with a potential new client: Metallica guitarist Kirk Hammett. This leads Jordan to search across New England for the right vintage horror toys to satisfy the heavy metal icon.