"Motion controllers, a packed in Xbox One gamepad and Rift-exclusive games"
By: Euan Dewar | PC News - Tech News - Xbox One News | June 11, 2015
Today was the time to shine for Oculus VR, the makers of the ephemeral Oculus Rift, as they held their Pre-E3 press conference. Lots happened; we got to see the final form of the consumer Oculus Rift, a bunch of fancy looking tech demos and hear some complimentary patter about Oculus from various developers. Here are the big talking points:
Oculus Rift to come with an Xbox One Controller, Xbox One games will stream to the Rift:
Most people didn't expect Oculus to come up with a gamepad of it's own, yet few predicted the announcement that each Rift would come with an Xbox One controller as standard. Additionally, Xbox head honcho Phil Spencer jumped on stage to explain that the Oculus will have native support for the upcoming Windows 10 OS. This means you'll be able to stream Xbox One games (through a PC) to your Rift. However, it seems that in most cases it wont be a full on VR experience, rather an equivalent of the 'virtual cinema' experience.
'Home' is the name of the Oculus' own Steam-esque Platform:
Using Home you'll be able to browse, buy and launch games all without having to remove your headset as you currently have to when using Steam. Game pages will also feature in-game scenes that you can look around before you decide to buy. And, of course, there's a social side that will show you what your fellow Rift-owning buddies are up to. 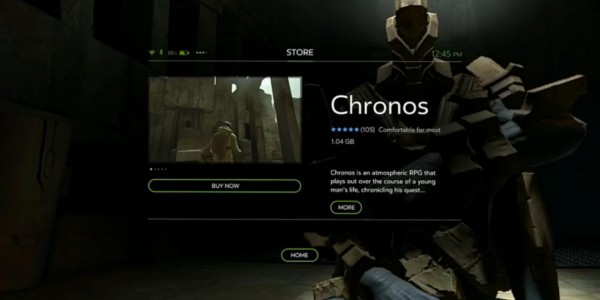 Insomniac, developers of Ratchet & Clank, are working on a VR-Exclusive game:
Entitled Edge of Nowhere, Insomniac's first foray into VR will be out in 2016 exclusively for the Oculus Rift. It's a third person adventure that looks very much in the vein of H.P. Lovecraft's classic At The Mountains Of Madness, what with its arctic setting and, y'know, the massive fucking Cthulu thing reflected in your man's goggles.
[embed]https://youtu.be/t2jVBC5idRI[/embed]
The Oculus Rift's motion controller is the 'Oculus Touch':
People wondered how Oculus would handle motion control, well here it is: the 'Oculus Touch'. There are two controllers (two hands, innit) and they're wireless for free, tangle-less movement within whatever virtual world you're inhabiting. Each one has an analogue stick, two buttons and an analogue trigger. They also include a "hand trigger" that is used to pick stuff up, among other things. Interestingly the controller also has haptics that give you the feedback to replicate the sensation of actually touching something. Imagine what you could do with that feature. Imagine.
Oh, also they recognize hand poses, so you can do a thumbs up or whatever filthy hand gestures you want to throw out there. The future is beautiful and harrowing in equal measure.