Off my mind: Multiple Endings in Games

Before I begin, I must stress that this article will contain ending spoilers for The Darkness 2 and inFamous 2, because I’m going to be discussing the endings for each game. By choosing these games I don’t mean to say that they are the perfect examples of what I’m about to discuss, but they are certainly the two most recent for me.

Now the biggest difference between these two games is that inFamous 2 wears its dual story on its sleeve, just like in the first game, you can either be Cole the hero, or Cole the mighty electric supercharged asshole. However, in The Darkness 2, the dual ending choice comes as a surprise and you don’t even know that it’s the end until the credits roll. This does highlight one of the biggest problems when it comes to its story and the decisions the player must make, the games pauses and throws a “press button A to do this, and button B to do this”. This certainly has a more severe affect on some people more than others, it doesn’t bother me too much, but the first inFamous game allowed you to make your decisions through gameplay, which made you fell far more involved the story and emphasised the consequences.

I’m not going to argue which storyline is better for inFamous 2, because that would be stupid, but the evil story ends in a far more effective way than that of the hero. Being forced to kill Zeke in the ending was a very emotional moment, and the lead up to that end is handled extremely well throughout the game. I really did not want to have to do it, even to the point where I tried shooting his arms so I wouldn’t actually kill him, but this serves as the best example of why using gameplay is a far more effective way than the button prompts you so often see. The game literally made me kill off my best friend because of the decisions I had made in the game, this would have had the opposite effect if all I had to do was press R2 to select a cutscene, the interaction is essential, and a core part of what makes games what they are. 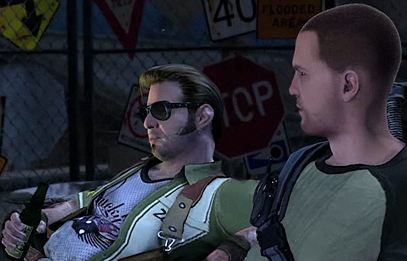 Zeke isn't the perfect friend, but that's what made him such a great character

However, this is completely undermined by the fact that there is another ending for the game, which isn’t necessarily bad, it just doesn’t have anywhere near the amount of weight that the evil one does. The hero sacrificing himself felt a little predictable, if they had just done away with the karma system, and just made you play an evil character, that would feel truly bizarre as the previous game was centred around that system so much. In that case you would be taking the power of choice away from the player, which (ironically) is what causes this conflict between the two endings.

This brings me to The Darkness 2, which, much like inFamous, has a great story, but the dual ending comes out of the blue here. There are certain points in The Darkness 2 where you have to make choices (in the button prompt manner) but there isn’t anything like the karma system that inFamous has. The way in which you make your choice is much less interactive here, but that does allow you to really think about what you’re going to do. The asylum sections in The Darkness 2 really made me question what was real in the game, and the references to the first games events play that up even more.

I chose to stay with Jenny, I wasn’t even sure if that was the end, when it faded to black I wondered what would come next, as soon as the credits began I felt stunned, that the game had committed to the idea of the players choice. Which of course, was completely shattered when, a split second later I remembered that there was another ending, which also seems to be the one that you’re supposed to pick, as if all the build up before wasn’t as good as you thought. I didn’t completely hate the rejection ending, but it just feels like a sequel setup and doesn’t even compare with the other. This wasn’t enough to make me think anything less of The Darkness 2 as a game, but man, if they had stuck with that ending...

Telling a really great story in a game is very difficult to say the least, there’s not really a correct or incorrect way of doing it and the value of a games story is different for everyone, I’m sure there are people who have stopped reading because they think The Darkness or inFamous have terrible stories and don’t consider them worth talking about. Setting out to tell more than one story, with a satisfying end is tough and they are even certain games where multiple endings make sense, I would say inFamous is in fact one of them, but there is a reason I cannot remember the evil ending from the first game. Telling one great story in a game is hard, managing to do it several times usually ends with the result of the games I’ve been talking about, you get one ending that if it’s your first, really resonates with you and elevates that game even further for you, and you also get one that you’re probably going to end up forgetting before long.