By: | Comic Reviews | February 22, 2011
I thought that it would be cool to every now and then review an old comic. To open the "chest" in hopes of pulling out a piece of treasure and not junk. After plunging my hands into the dark depths of my collection and fishing around for a while, I was able to pull one out with my arm still intact. The comic comes circa 1985 and is Captain America #316.

Steve Rogers is having a hard time with his girlfriend Bernie Rosenthal. He is finding it harder and harder to find time for her ever since he created the Captain America Hotline. At the same time Hawkeye and Mockingbird drop in to visit as the former has been subpoenaed to testify in court. Not only that but Armadillo (who had a confrontation with Cap in #308) decides to go on a rampage and then hoping to kill himself because he learns of something quite sad about his wife. 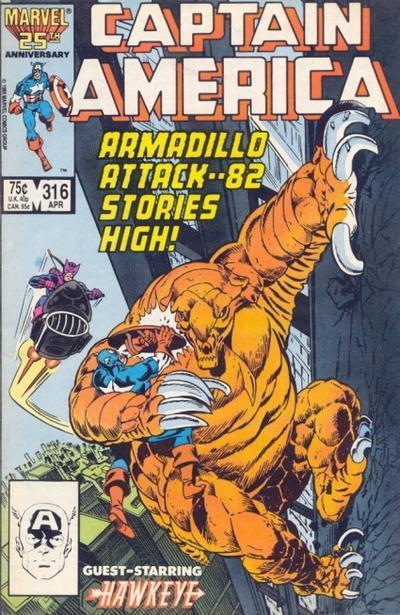 This issue was written by Mark Gruenwald. A man who worked on the Captain America title for eleven years, finishing the year before passing away. With the issue being called Creatures Of Love, it was only fitting to be full of drama which is something Gruenwald was able to achieve within this comic. Although at times Gruenwald used a lot of dialogue, he truly brings across the dramas of being in a relationship to a serious but realistic level.

On the artistic side of things, we have Diana Albers as the letterer, Dennis Janke on finishes, Paul Neary on pencils and Ken Feduniewicz on colours. Feduniewicz mainly did colours for Captain America in the early 80's and for an older comic the colouring is still very strong with no fades. Feduniewicz used mainly simple colours for this issue but they are all bright and strong, even the grey tones.

Paul Neary did the pencil work on this issue. Mostly known for his work on Captain America but he has also done work on the Doctor Who Magazine in the early 80s as well as a small run on Excalibur, but even doing work on recent titles. His pencils in this issue are similar to his work on Excalibur being more of a simple nature. One of the most notable parts would be his work on the hair of each character. Always looking windswept and perfectly shaped.

Honestly I only picked up this issue for some random reading when I was flicking through the back issues at my regular comic shop. If you are a fan of Captain America or older comics or both and you happen to stumble across it, then I recommend that you add it to your archive. As I am a fan of both, I did enjoy this story of drama and was satisfied.