With dozens of critic groups having weighed in, you'd think most Oscar races would have changed a great deal over the last few weeks. Not Best Actress, however. There were about eight viable contenders in November, and those eight still have a stranglehold on the category.

Though eight women are contending for five spots, it's clear three of them are certainly in the race. Meryl Streep was a lock for Best Actress 2012 the day The Iron Lady was officially announced. Margaret Thatcher is one of modern history's most interesting women, and Streep, of course, gives an Oscar-worthy turn every time she steps in front of a camera.

Her biggest competition is likely Viola Davis. The two somewhat ironically squared off onscreen in 2008's Doubt with many saying Davis outperformed her colleague. The Help, of course, will be a major player in multiple categories this year, so that good will could easily carry Davis to her first ever gold statue.

The third woman in position to possibly win is Michelle Williams for My Week with Marilyn. Now, she'll have more of an uphill battle than the other two, because her film was pretty poorly received. Worth noting, however, is that this award typically goes to a younger woman—Natalie Portman, Kate Winslet, Sandra Bullock, Reese Witherspoon, Hilary Swank, Marion Cotillard. The only woman over 40 to win in the last decade was Helen Mirren, and if anyone is going to keep that trend alive this year, it's Williams.

So, with five women left competing for two slots, who looks best? Tilda Swinton has been recognized by many critic groups for her performance in We Need to Talk About Kevin, as has Charlize Theron (Young Adult), though the latter failed to pick up an SAG nomination. 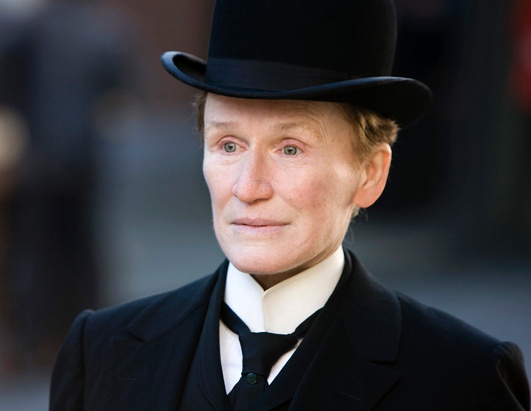 One of the more puzzling questions is what to do with Glenn Close (Albert Nobbs). The film's buzz has been as quiet as a mouse and there's concern that not enough voters will see it to nominate Close. But she's earned all the notices one typically needs to snag an Oscar nod, so she's certainly in the hunt.

It seemed Elizabeth Olsen (Martha Marcy May Marlene) had a good shot at being this year's Jennifer Lawrence, but her name has been popping up a lot less frequently than most people anticipated. Then, there's Rooney Mara (The Girl with the Dragon Tattoo), who earned a Golden Globe nomination, but not much else. Still, her film's high profile can only help her prospects.

That's it for this week's Oscar update. Check back next week at this time for more on the Best Actor race. If you're curious about our overall predictions in the major categories sans analysis, head here.