The lacking visuals are interesting, though. Limiting the palate to just a few colors makes what hues remain quite bold, and a quick glance is enough to pull you in and have you test out the waters. Its lone, low-key booth at PAX 2010 was fairly well occupied considering the title’s obscurity because once you see the art style you think, “Hey, what’s this about?"

Once you get into Outland, those visuals can get old really fast, especially when you’re trying to navigate around. It’s not a Metroidvania title like you can tell it desperately wants to be, but still it contains enough exploratory elements that grant the need for more unique-looking areas in the game. Along with the background, even the gameplay becomes very repetitive, very quickly. 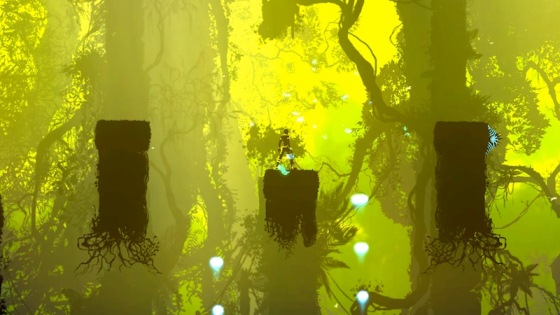 This is around the time where I’d normally tell you the premise of the game, but I’ll be honest here: I have no clue what the story is. I even scoured the web to see if someone intrepid had done a plot summary, but any text on the game seems to be just as confused as I am, so I suppose I don’t feel so bad. Considering the style of game it is, I can’t knock it for that–if anything I should throw it a bone for at least trying to come up with something. I don’t think anybody ever put Super Mario Bros. in, started it up and said, “Hey, wait. Could I have a better explanation of what’s going on here?”

The basic gameplay is a somewhat non-linear side-scrolling hack and slash. The hacking and slashing starts off with just a sword that you can use either standing up, crouching, or slashing upwards. There isn’t much risk/reward with the moves. Slashing it upward is powerful, and when actually striking an enemy you can execute these slashes just as quickly as if you’re standing there using the regular, weaker attack. Between the fighting, there is plenty of platforming where running, jumping, wall jumping, and ledge grabbing are your staple moves. Eventually moves like a slide and downward thrust assist in your exploring and can also serve as attacks. Overall the combat is smooth, maybe a tad bit on the heavy side now and then, but pleasing for the most part. Surprisingly you can actually chain some moves to pull off combo attacks, but don’t expect the game to recognize you for any of them, which is a shame.

Like I said, Outland really wants to be a Metroidvania game, but it’s slightly off. The formula is almost there. You’re dropped into a world and you don’t have much of an idea where to go. However, in the way that Shadow Complex went from potential heir to the Metroidvania throne to just another 2D platformer/shooter, it constantly tells you where to go next. At least with Shadow Complex you could ignore its “hey, go this way” cues and explore the other direction because there’s probably something worthwhile there. In Outland, you can attempt that tactic; however you won’t end up with any reward for going off the beaten path except wasted time. Had the Fable-styled “golden breadcrumbs” and dot on your map not existed, then that would be called exploration–something that has been sadly absent from most games for a long time. But that’s a whole other issue.

Speaking of the map, it’s pretty bad. Again, the game is fairly linear, however open enough that it does call for having a decent map. Try to zoom out and see how each little area is connected to the big picture and that’s even worse. This combined with the general vagueness of the game design led me to getting lost enough that I didn’t even want to go back and try to find things I passed up, and that to me is a big blow. 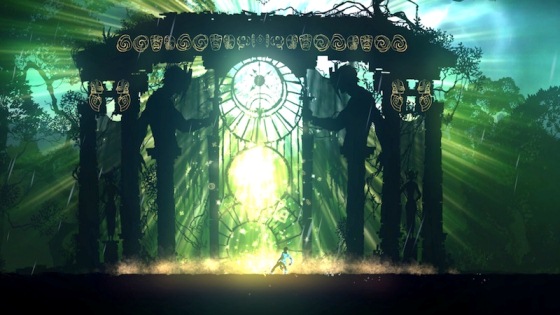 Personally I believe one of the elements of a great game is walking past something and not being able to access it, and then once you obtain the means to, going back and finding that area again. In Outland, that whole cycle is more unpleasant than it is rewarding. My first attempt at this should have been my last. After defeating the first boss (which you’ll know because they’re all actually labeled “boss”) you gain a Zelda II-esque downward thrust move. Earlier in the game you pass over what looks like spots in the ground that should be breakable, but you have no way to break them. Now that you do, you can go back and see what’s underneath. In each instance, it’s just coins.

Coins, by the way, are all over the place in breakable jars and you receive them for taking down enemies. These coins can be used to purchase health and energy upgrades at various spots in the game. The thing is, at each spot you can only buy one upgrade, therefore making the excess amount of coins you get pointless, and in turn, making exploration also pointless. If you stick to just following the most direct path to the end of the game, you’ll have plenty of coins to get your upgrades.

Refilling your health is mostly done through finding hearts in the jars, or spots where you can rest and your health will slowly refill. One thing that is great to see is if you’re maxed out on health but find a heart, you can break the heart and get coins instead; however, as I said, these extra coins are fairly useless.

The other stat you have to worry about is energy, which is depleted when using special attacks such as a more devastating sword swing. Energy is recovered by defeating enemies or also finding refill spots.

It’s hard to totally knock the game as not having exploration elements, because it does. But with the combination of the breadcrumbs, the “go here” mark on the map, the lack of unique-looking areas, and the lackluster rewards for finding what’s hidden (which, by the way, can also be behind invisible walls), you can see why it was more of an attempt on putting exploration in the game rather than a success.

The developers chose to take quite a while to get to the actual point of the game, which happens when you gain the power to turn into light or dark forms represented by the colors blue and red respectively. This turns the game into a sort of platforming Ikaruga. There are a lot of bullet hell-type, well, bullets and beams flying at you that you have to avoid while jumping around and offing enemies. But with the power to change forms on the fly, you can just change to the matching color of the projectiles and absorb the attack. If you’re the opposite color, you’ll take damage. Going in the other direction, if you’re attacking an enemy you have to be the opposing color so that it can be defeated. Therefore if the enemy is red, you need to be blue to attack and vice versa.

Color changing also works its way into platforming. There are areas where you’ll have to jump from platform to platform, changing colors mid-jump so that you can make the next colored platform solid and be able to land on it.

One of the finer points of Outland are the bosses. They’re visually appealing, have creative attacks, and overall provide some of the best action sequences in the game. These are the kind of battles which almost require you to go through them phase by phase at least once so that you can die, learn what to do, then go back in and attack the right way the second time around. Still, they were fun and offset the monotony of the main storyline’s experience. 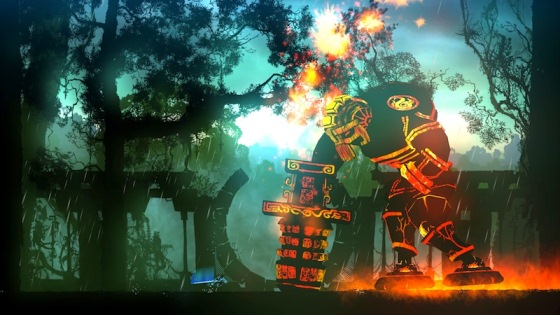 Aside from the single-player campaign, you can also play an arcade style time trial mode which lets you play through modified versions of the story mode before time expires. I found this mode to be a bit rough, mainly because you’re going from having the abilities you earn in the single-player mission to losing them all and then trying to speed through a level, which can take some re-learning. Online co-op is also available for the story, arcade mode, and special co-op challenges which can be unlocked by playing through the campaign.

The music was a little disappointing and was kind of all over the place as you play through the game. Starting with an attempt to be atmospheric, but ending up being more Jungle Cruise than, say, Metroid, in later levels where the score is a little too overly epic. The direction was there, but the execution was not, which is sad because what could have been a redeeming factor ended up being another missed opportunity.

If you’re thinking that I’ve mentioned Metroid or Metroidvania a lot during this review, you’re right, I have. In fact I actually took out a few references before finishing this up so I didn’t sound as crazy. Outland and Metroid are very similarly styled games. They’re both side-scrolling action platformers, they’re both (in theory) one big map instead of multiple levels, they both have lots of upgrades for you to find to make your character more powerful, they both have hidden areas which are unlockable through those upgrades, and they both have backtracking.

Think about Metroid for a second. If you strip away those aforementioned elements from above, you go from a classic game to a fairly mediocre one. Now add the exploration back into Metroid, but instead of finding useful upgrades, imagine if what you found was fairly pointless. Now add the backtracking, but instead of using your brain to remember where you need to go back to, the game essentially becomes linear and just loops you back around to that spot you need to be. Also try to imagine this bizarre Metroid having no unique-looking areas so that if you did actually use your brain to backtrack, you couldn’t navigate as easily because everything looked exactly the same. These are the issues with Outland. If I ignored how close to a Metroidvania it was, this would have read pretty much the same way, and it would have scored the same as well. It just pains me to see something get so close to a classic and become one of those arcade games we’ll forget we have on our hard drives in about six months.

Outland is a fun action platformer with unique elements that haven’t been seen before. It also has an appealing art style, provides a decent challenge, and has some clever boss battles. All that gets old real quick, despite its attempts at exploration, and turns what could have been something way more unique into an average experience.