The reaper commeth. As if the largest opening of the franchise wasn’t enough, Paranormal Activity 3’s mammoth $54-million opening also shattered the record of another threequel (Jackass 3D) for the biggest October opening and biggest fall opening, not to mention it now lays claim to the largest horror movie opening — ever. And for the expected icing on the proverbial cake, the film can boast the biggest found footage debut in what will no doubt now be a rabid genre. All other openings either disappointed or tanked.

Vaulting to a gross that beat the entire other nine films in the top ten combined, this haunted house three-quel rode a wave of lackluster horror offerings, surprisingly great reviews and an impending Halloween holiday. Bizarrely (and even though there has been an onslaught leading up to now) no new fright flicks open next weekend indicating that a decent hold could result (in terms of the normal horror movie second weekend plummet, of course).

After clutching hold of the highest midnight show opening for a horror feature with $8 million, Friday saw a delirious $26.3-million gross, which matched the entire opening weekend of the mega-budgeted Real Steel two weeks earlier. “PA3” on the other hand, made more than ten times its budget this weekend, plus an additional $26 million from overseas markets for an early total of $80 million. To put things in perspective: the entire franchise carries a production budget of a hair over $8 million but has grossed a bewildering $247 million worldwide.

Speaking of Real Steel, Jackman & Co. held fast yet again with an $11.3 million weekend, a $67.2 domestic tally and $153-million worldwide total. Again, with no crowd-pleasing special effects romps to be seen, this inspiration robo-take on the sports genre continues to find an audience. 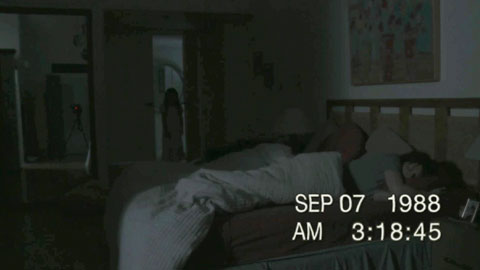 Also showing it both has legs literally and figuratively, Footloose slipped only 30 percent to $10.9 million. This is a better hold than most dance films that tend to be front-loaded because of their teen-centric audience, but good reviews mean that this may ride a wave of good vibes late into the fall.

Underperforming in fourth was Summit Entertainment’s The Three Musketeers. Despite continuing to do solid business overseas – it now has a worlwide tally of $73 million  – the lack of starpower, time-bending premise and fight for a shared demographic with Paranormal Activity 3 made it a hard sell in North America.

The Ides of March, Dolphin Tale and Moneyball all saw declines in the low 30 percent range, which easily equated to a defeat over Johnny English Reborn and its eighth place premiere and piddling $3.8 million debut. There was simply no market for it on this side of the Pond, let alone for a poorly-regarded sequel.

Quickly recapping some films in the lower echelon of the list, The Mighty Macs was wimpy with just $1.1 million whereas Oscar hopefuls Margin Call and Martha Marcy May Marlene both saw solid bows in limited release.

For Halloween weekend, another three wide releases try to scare the cash out of you, though none are of the fright variety. Puss in Boots, the “Shrek” spinoff scratches out a substantial 3,800 screens, followed by the Justin Timberlake-led sci-fi thriller In Time in 3,000. Johnny Depp again goes whacko in The Rum Diary across 2,100 venues and Rolland Emmerich’s Shakespeare drama Anonymous appears to have been dumped in just 200 with a possible expansion in November.