Parks and Recreation returned this week with an installment focused on Pawnee's youth, and why Ron Swanson hates most of them. “Pawnee Rangers” saw some of the staff heading out to get in touch with nature, while others were getting in touch with self-indulgence, and one was just touching his coworker's daughter. Definitely one of the best episodes fans have received this season, the few dry spots were outweighed by some outrageously funny moments.

With the opening minutes of “Pawnee Rangers” P&R showed off it's skill for using the cold open to both draw laughs and set up the episode’s storyline. The introduction to the Pawnee Rangers and Goddesses, who just couldn't have been run by anyone except Ron and Leslie respectively, let us know what we were in for during their annual “Wilderness Weekend.” While Andy – sorry, Brother Nature – provided some early humor, as did Leslie by mocking Ron with her southern belle character, Annabelle Vandergraff. Of course, Amy Poehler's incredible ability to pull off any role she takes on is what really sold the moment. And though his 'stache wasn't quite back to its full glory, Ron killed it with the extensive guide for the rangers, as well when he segued into the credits with the story about refusing to repeat after the priest during his first marriage ceremony. Having just met Tammy 1 a few episodes back it was easy to picture. 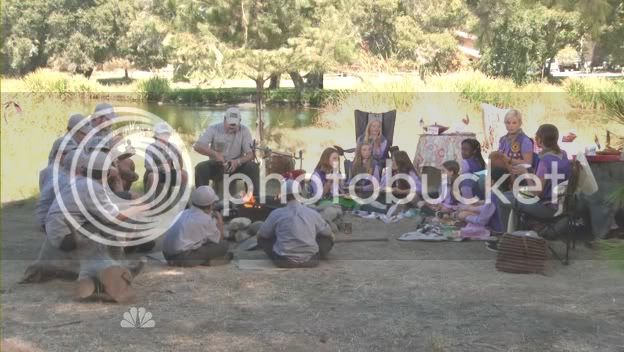 Though the trip starts with the groups segregated by the sexes, it isn't long before everyone is looking to defect from Ron's overly-intense survival course. Who knew when dealing with kids -and Brother Nature- that puppies and candy trump cardboard boxes and canned beans? The public forum to debate the segregation issue garnered a few laughs, especially for the children of Pawnee turning out to be much more rational than their parents are normally. And Ann may have gotten shown up by Lauren's “Gertrude Stein” but she claimed the title for best line of the episode(along with the badge for Second “Flyest” Hairstyle). She hasn't really been bringing the funny since the season premiere, but her success at impressing the newly christened male members of the Goddesses more than made up for it; “Feels pretty good to have a bunch of little boys be super into me. That came out wrong.” Leslie setting up a group specially dedicated to those kids who want to march to the beat of a different drummer(and make the drum themselves) ended the storyline with a touching moment between her and Ron. Keeping them in separate offices for the shot was a smart way of preventing it from being too sappy of a scene, something P&R does incredibly well.

Tom and Donna were off on their own annual event, and while it wasn't the funniest of storylines, “Treat Yo Self 2011” still had its moments; especially since Ben came along with them. Finally giving a little acknowledgment to the big breakup that kicked off the season was a welcome advancement. Ben in a state of depression over no longer having a reason to stick around Pawnee(not to mention that expired meatball sub card) was just what the doctor ordered, so to speak. Leslie's hummingbird-like energy levels makes it almost easy to accept that she could push it away, but since Ben was for all intents and purposes the “dumpee” he should have some reaction. So seeing his post-relationship slump addressed was necessary for the character's progression. Almost as a bonus, the plot also resulted in a moment that was simultaneously surreal and awkward, but nonetheless hilarious.

Ben must have been feeling out of it for his “Treat Yo Self” purchase to outweigh Tom and Donna's in impracticality, plus a crying Batman is just not a pretty sight. Especially since Ben already confirmed how much of a geek he was with his stern defense of his favorite fantasy TV show(“They would never cancel Game of Thrones.”). Weeping while in a rubber suit probably isn't really how Ben wanted to spend the afternoon, and that cowl isn't very flattering on the jawline, but his embarrassment was an uncomfortably uproarious pleasure. Tom and Donna pulling classic “Tom Faces” at the same time was the perfect response to the outfit. The final shot of Batman Ben back at his place with Andy and April was a fitting way to close out the episode. It's nice to see him still treating himself, even if it's only because his frugality demands he gets his money's worth out of the costume.

Despite there not being much time devoted to Chris and Jerry's lunch with the latter's daughter, it actually provided Chris the same character development and humor that Ben's day in the Eagleton mall brought him. It was an interesting turn to see Chris, the show's white knight, take on a less innocent persona. Becoming instantly enamored with the surprisingly attractive young woman, Chris shows himself to be a bit of a ladies man, while also showing he can entertain with more than just his trademark “literally.” Congratulating Jerry on a job well done upon being introduced to Millicent is just the kind of thing Chris would do without a second thought, and get a laugh while at it. Spending the night with Millie leaned more toward his newly revealed dark side, but disclosing it to Jerry at the end of the episode had him right back to his humorously honest self.

Not quite the episode to have you hyperventilating from start to finish, “Pawnee Rangers” didn't have any real flaws, just not enough of the oxygen tank requiring humor that would have pushed it over the top. Parks and Recreation is still proving week in and week out that it's one of television's best comedies, but it would be nice to have that absolutely knockout episode that shows it off.