"A great story that is hampered by an average production"
By: Russ Matthews | Movie Reviews | March 27, 2018
After Jesus, the most significant and polarizing individual in the Bible's New Testament is Saul of Tarsus, better known as the Apostle Paul (James Faulkner). His letters have helped to mold the lives of Christians throughout the centuries and have been the catalyst for a multitude of theological debates. In this modern era of the internet, it may be difficult to comprehend how these writings were delivered to the churches and ultimately compiled into such a significant part of people’s lives. Paul was writing most of the epistles while he was in jail, he was unable to get them into the hands of his intended audience. The credit for their delivery and protection goes to God directing many faithful individuals to get these words of the apostle out for the world to read. 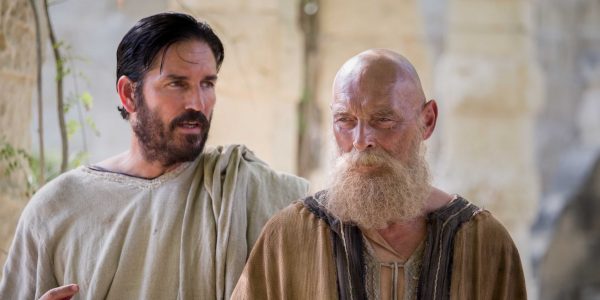 The latest biographical sketch of the man who turned from a brutal persecutor of Christians to one of the most influential voices of the faith focuses on the final stage of Paul’s life. As a prisoner under a death sentence in the infamous Mamertine Prison in Rome during the reign of Emperor Nero, he sits and awaits execution. After the great fire of Rome, Paul and the followers of Christ are blamed for the disaster and become sought after by the Romans to be killed in the Roman Circus or burned to light the streets of the city. The Christian leader is arrested and beaten in prison, while the survivors of the targeted persecution remain in hiding in the city. Luke (Jim Caviezel) strives to find the remnant of Christ followers and information on Paul before his execution. Eventually finding Priscilla (Joanne Whalley), Aquilla (John Lynch) and the small community of believers, he gains the details and contacts he needs to get into the prison to meet up with his old friend.  Once the physician realizes the desperate state of Paul and the community, Luke determines to transcribe the final words of Paul before his death. During this time of exceptional historical significance, he must navigate past the hatred of the Roman people, the fear of the Christians and try to convince Mauritius (Olivier Martinez), prefect of Mamertine Prison, that his actions are beneficial for the Roman leader and the society the military leader holds in such high regard. 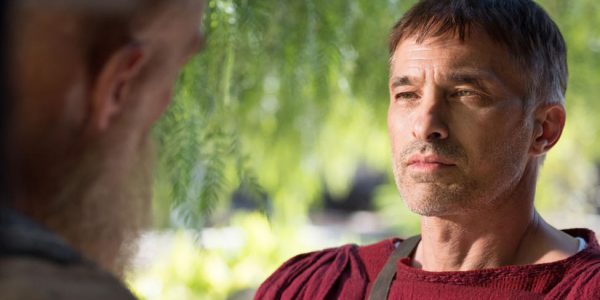 The team at the faith-based arm of Sony Pictures known as Affirm Films has been working over the years since the success of The Passion of the Christ to deliver biblical stories to modern audiences. Lifting the quality of the Christian film industry by providing better casting options and getting the financial backing that raises the production value. The production team has delivered various options with different degrees of success. Ranging from recent quality projects like Risen and All Saints to the lower caliber options like The Star. This varied set of results makes it difficult to predict the quality of Paul, Apostle of Christ and how it will fare at the box office. Upon screening the film, it proves that even with a robust cast and quality visual effects, this film falls somewhere in the middle of previous Affirm productions. The drama surrounding the events during the time of Paul’s imprisonment in Rome makes for compelling history with climactic elements that came to define the early church. With Nero’s persecution and the disdain from the Romans as a backdrop, the pressure on the leadership and the urgency of Luke’s mission make for an essential tale of Christian history. One act in particular during a time when a small group of Christians waits to enter the Roman Circus, while praying for the life of Mauritius’ daughter, proves the story has some great theatrical moments. Jim Caviezel, James Faulkner, Olivier Martinez, and Joanne Whalley deliver strong performances that help to move the narrative along and show the impact of the history as it unfolds on screen. 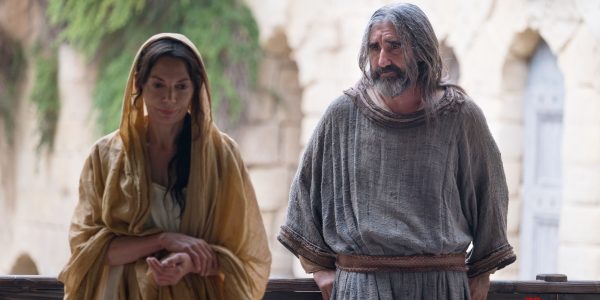 The difficulty with the script and the overall experience is the unfortunate method that has been the weakness of this genre for years, trying to do too much. Instead of focusing on one aspect of Paul’s life, writer and director Andrew Hyatt (Full of Grace) attempts to show Paul’s backstory, the difficulties of the church, the drama in prison and still tries to show every element of the Gospel message in one film. The script becomes cumbersome and the production collapses under the weight of all that the writer is trying to convey. In an attempt to show all that was going on during that era, it becomes difficult to determine what the central story is of the film. Paul, Apostle of Christ becomes a mature version of a Sunday School lesson where all of the class members can play a game of ‘guess where the Paul quote is in the Bible.’ Providing Christians with an example of how the Bible is still relevant, but forgetting that those outside the faith may not know the story of Paul. Despite opening the door to discussions on this fascinating historical figure, it does not offer anything intriguing enough for those outside of the church faith to be interested.
Rating
6.0
Pros