PC Shooters You Should Play Instead of Halo Reach Part 5

For the last five days we here at Player Affinity’s PC gaming department have been suggesting PC games you should play instead of Halo Reach.  Well, now that Halo Reach is here, and two million gaming nerds have called in sick to work, we have one final game to recommend for those of you who aren’t fighting the Covenant (And those of you who are waiting by the door for the delivery guy from Amazon.com to bring you your copy of Halo). 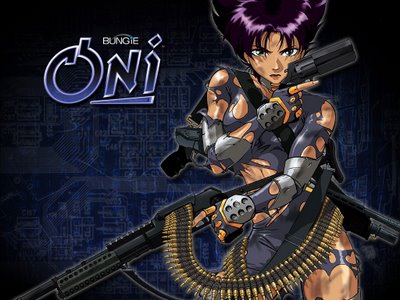 Released in January of 2001, Oni is the last game that Bungie made before the original Halo.  Way back in the 90’s Bungie was a PC and Macintosh developer. They weren’t the XBox flagship until Microsoft bought company in 2000 (Halo was originally intended to be a Mac game). They had franchises including Marathon, Myth, and Oni which was made by a West Coast subsidiary company.  Oni wasn’t a spectacular product, but it was certainly enjoyable enough to play through in the days when a 32 meg graphics card was cutting edge.

Oni was a mixture of third-person shooter and a brawler. Although it had a large selection of guns to choose from, it limited you to carrying just one at a time, and you had to disarm a foe to get another one.  Ammunition had to be scavenged from defeated enemies, which forced players to use hand-to-hand combat in order to conserve ammo. The animations were excellent for the time period, and by carefully mashing your mouse buttons you could get Konoko to pull off some nifty martial arts moves.

Set in an Orwellian cyber-punk future, its story followed the adventures of a purple-haired police woman named Konoko, who bares more than a passing resemblance to Motoko from the Ghost In The Shell anime series; there’s a strong anime influence in all of the art design as well. Motoko is investigating an evil corporation- I mean Konoko is investigating an evil corporation that is trying to take over the world.  That sort of story was all the rage back in the turn-of-the-millennium days, and plays out acceptably well, but the real fun comes from punching and shooting the bad guys (If you want a game from 2000 with a great conspiracy story, check out Deus Ex, our bonus Shooter-You-Should-Play-Instead-of-Halo-Reach).

Oni isn’t going to offer much comfort to shooter fans who are missing out on Halo Reach, but it does offer a quaint insight to the history of Bungie as a company and how the industry has grown in the nine years between the two games.

You can purchase a copy of this adorable little time capsule for about a buck on Amazon.

Moments ago, the delivery guy from Amazon arrived, and my new copy of Halo Reach Legendary Edition is awaiting me on my coffee table.  You folks enjoy Oni, I have to go save Reach from the Covenant.