Pick of the Week: The Malignant Man #1 – Review

First issues of unknown properties are one of the hardest things to write in the comic industry. You have to capture an audience by telling an interesting and/or unique story, give the origin and also have art that people enjoy, but also fits the story. All of this because if you don’t impress comic readers you may not make it to the end of the series or you’ll watch your sales drop. There are a lot of pitfalls when it comes to first issues and thankfully The Malignant Man avoids a lot of them.

Written by one of Boom’s go to writers Michael Alan Nelson (Pale Horse, Hexed) the story revolves around a man diagnosed with terminal cancer. Upon finding out his life expectancy (2-3 weeks), he leaves the hospital and begins taking in the world around him as he tries to recall the memories that his brain cancer has taken from him. He makes his way to a park where he comes across a woman being robbed at gun point. He takes action, figuring there’s nothing to lose, and attacks the man so the woman can flee. The robber puts the gun to his head and shoots him and then for good measure shoots him twice in the chest. 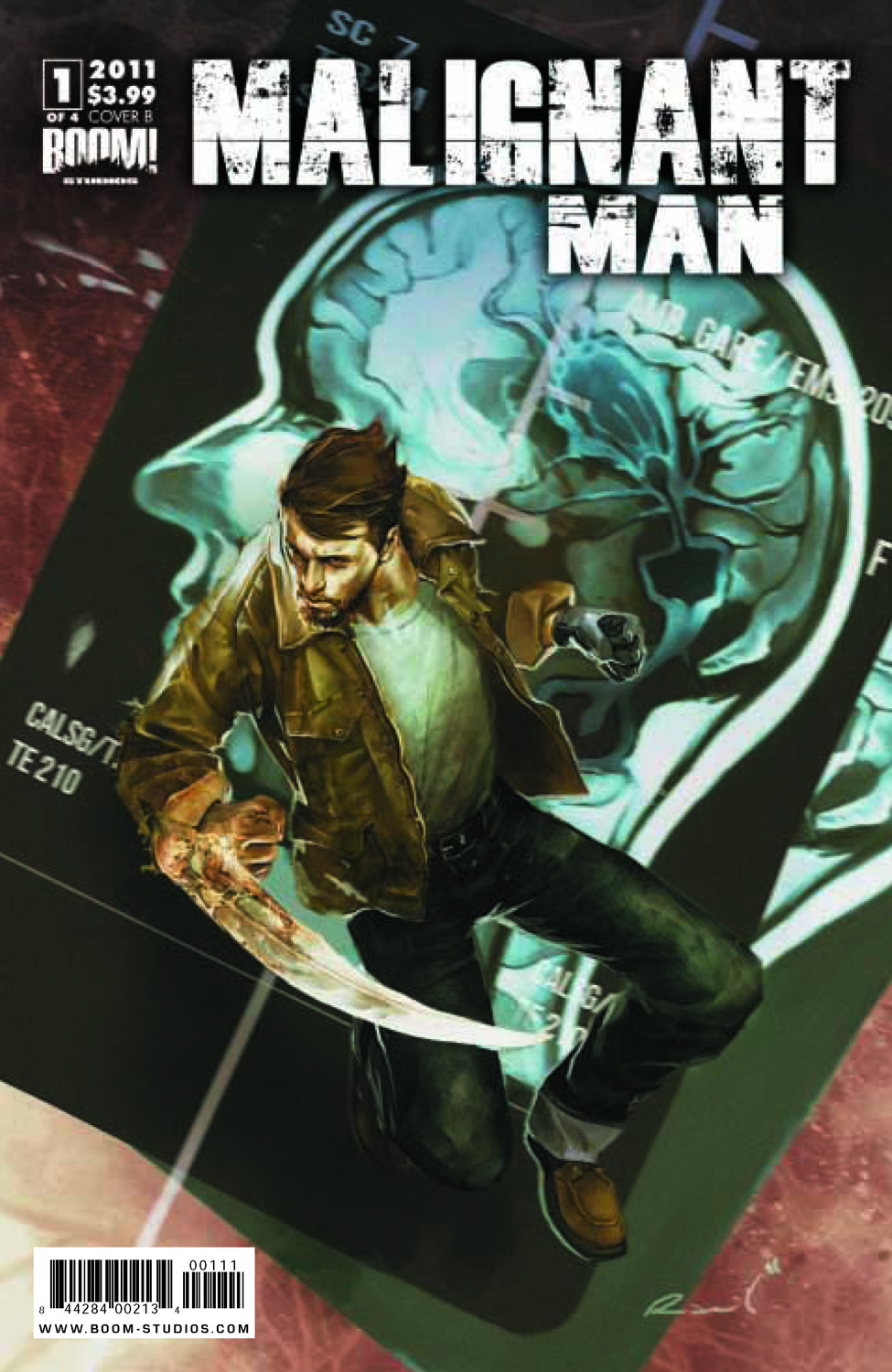 Surprisingly the man is alive and rushed to the hospital. The doctors decide to operate on him even though he’s terminal. That is until a woman breaks in and staples his head back on and kidnaps him from the hospital. The man wakes up with his head barely on and gun-shots to the chest, he’s pretty confused as to what’s going on and so is the reader. Fortunately you’re not given enough time to think as a group of men with distinct blades raid the hospital and begin killing everyone is sight.

This issues strength is the mystery that it keeps by the end of the issue. It doesn’t reveal the who, the what or the why to you. It just keeps pushing through stringing you along for the ride. If we had a first issue checklist we would check off “capture the audience” right about now. Its next strength is in the character development.  The main character is likable and we’re given enough insight into his mind to know him a bit and understand his place in life. If we head back to the checklist we can mark off “unique story” as well since the concept of a terminally ill man healing every part of his body with the exception of his cancer is very interesting to say the least.

Really there isn’t much wrong with this issue, not that there needs to be. It was very good and almost surprisingly so since it presents itself as one thing on the cover and becomes something different altogether when you get to the first page. The villains were poorly introduced and their random killing made them seem more ridiculous than scary, but then something had to give to make sure the other elements where good and interesting.

I’d have to say that so far The Malignant Man is my pick of the week. It has a strong story and great art from Piotr Kowalski and really stands out as a great book from Boom! I haven’t read anything as interesting from Boom! (with the exception of the Stan Lee books) since Codebreakers and I hope that this is more of the path of books and writing that Boom! is heading in. With two covers to choose from it shouldn’t be hard to grab at least one copy of this book this week from your local shop.

If you want to read the preivew check it out here!