A military truck in Afghanistan is driving around some very crass soldiers in the middle of the day. The group is cracking jokes and the only woman on the truck is especially joking around until one back fires on her compliements of Pinpoint. Suddenly a bomb goes off flipping their truck putting them into a war zone where they must fight their way out.

Flash forward to the present and Pinpoint, one of the soldiers on the truck is tied to a chair. He is bleeding and being tortured by a Jamaican Crime Lord, but is still being tough as hell. They shock him with electricity and he still threatens their lives. The story then jumps to a week prior as Pinpoint is riding his motorcycle to the pentagon and disobeying every traffic law he can along the way. When he arrives he sits down to a private meeting with Mr. Washington.

Washington wants to send Pinpoint on a solo rescue mission in Jamaica to save Mel the woman from the truck earlier. Apparently she was infiltrating the Crime Lord who is doing something fishy on an uninhabitable island. Pinpoint brushes off the mission at first, but when it comes to Mel he changes his mind. Also Pinpoint doesn’t like working with others so it’s a good chance for him to work alone. 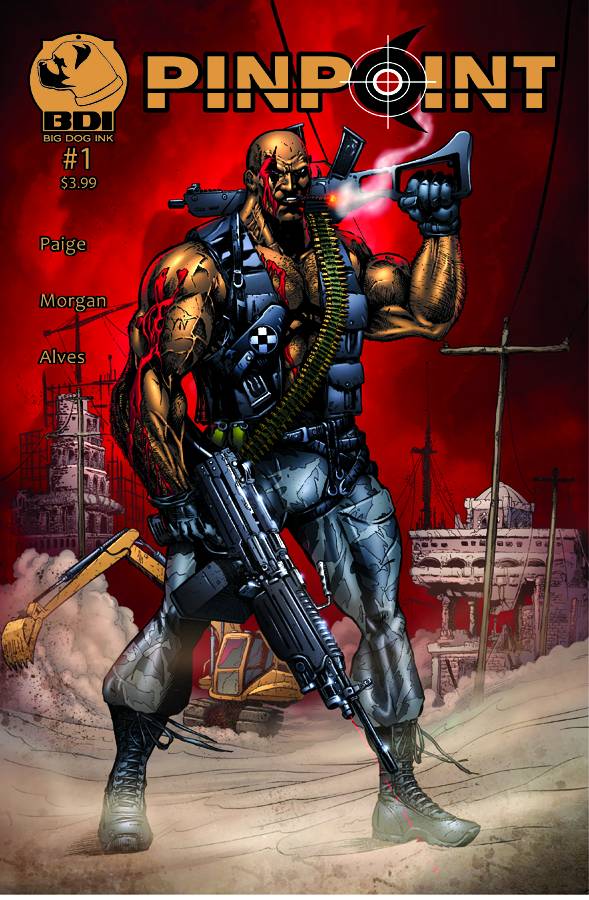 The Island he’s heading to is full of radiation so he has to take shots daily to avoid permanent damage to his system. Once on the island he’s bugged by some orphan children that he brushes off. Until they all pull guns on him. Pinpoint doesn’t take any shit though and beats the crap out of the kids, even putting a gun to one of their heads. He gets info out of the kid then lets him go after shooting him... not really but I wouldn’t have put it past his character. After taking the kids guns he makes his way to a bar to get more info and a drink. Everyone in the place is smoking including Pinpoint, but the bartender asks him to put out his cigar. Pinpoint responds by grabbing the bar tender and putting it out in his eye!

The only way I can describe this book is that it walked straight out of the 90’s. The action the dialog the sexual jokes are all things that are associated with 90’s comic books. That’s good and bad depending on what you’re looking for with your comics. If you’re looking for a big bad ass to beat the shit out of guys and spout one-liners and vulgar and funny threats of death then you’ll enjoy this book. If you’re only into the modern age of comics then you might find this story dated, but honestly I think it has a place in the comics market.

The story is actually layered quite well as it jumps into different points in time. It gives the reader something to figure out as the story reveals the ending and works its way towards that ending. Pinpoint as a character comes across very smart and not just a wild maniac. Sure he is still a wild maniac, but he doesn’t just rush into things without knowing what he’s up against. The dialog is very B-movie, but in that good cheesy way. The writer clearly knew what they were going for and focused on a fun and action filled story.

The art is also straight out of the 90’s which kind of helps the story. If this was drawn with a more modern feel to it than it might make the story stand out as being the weaker aspect of it. Everyone’s muscles are ripped beyond belief and I mean everyone… except for the children. The art can be pretty inconsistent at times especially with the kids. Their proportions are pretty messed up when their holding guns. They pretty much look like adults who then make Pinpoint look more like a giant than anything else, but the art is fun and fits the story so it didn’t really matter.

This book is not for everyone and some people shouldn’t bother picking it up since they’ll surely judge the crap out of it. I had a good time reading it and appreciated it for what it is: A fun action story with a bad ass of a character. It reminded me a lot of what Cold Space was trying to be, but where Cold Space failed Pinpoint got it right.

Originally I scored this book around 7.6 because it’s just not up to the standards of modern comics, but then I found I couldn’t stop talking about this comic. It was just too much fun to tell people about a guy round housing a little kid in the face and then shoving a gun in mouth. Granted the beginning isn’t nearly as strong as the last five pages are, but there is just something that I really enjoyed about Pinpoint. It was so bad that it made it good and I think that any comic that makes you talk and laugh as much as this one did deserves to be scored a lot higher than 7.6. Part of me wants to say it’s a perfect 10, but I can’t do that because 10’s would then never hold the same meaning again. So the book is getting a 9.0, you can see my original break down of the score below. Know this though… I was really close to giving it a 10.

Want to see what else Big Dog Ink has going for it? Check out Critter, Ned The Chaingsaw Guy and Penny For Your Soul!
Rating
9.0