Are you excited about Catwoman being playable in Batman: Arkham City?  What if I told you that you won’t have to wait until the Fall to play as Catwoman?  It’s true!  She’s already a playable character in several, mostly terrible games.  The feline fatale has a rocky history as a playable character, so before we all go into heat over Batman: Arkham City, let’s take a look at the Princess of Plunder’s cat-a-clysmic history in gaming.

Remember a few years ago when Ed Brubaker re-vamped the monthly Catwoman comic book into a film noir-inspired setting where Selina teamed up with hard-boiled detective Slam Bradley?  Yeah, that was cool.  You know what wasn’t cool?  Pretty much every other attempt to give Catwoman a solo series.  The worst of them all was the embarrassingly long-lived series from the 90’s. That book hired, then fired a different writer every year.  With the exception of Devin Grayson’s turn at the helm, almost every issue was garbage that sold only because of the sexy cover art. 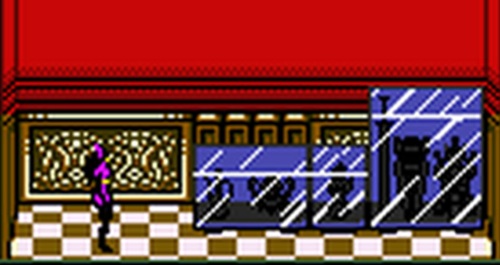 Why do I go into such detail about the 90’s incarnation of Catwoman?  Because, regrettably, it was the basis for the first game to feature Catwoman as a playable character.  Remember Catwoman’s rogues gallery of villains like Zephyr, Alley Cat and Cyber Cat?  No?  That’s because they were the sort of crap villains she used to fight in the 90’s, and if you owned a Game Boy Color, you got stuck fighting them too in a bad 2-D side-scrolling beat ‘em up starring a purple stick-figure with black boots.  Such began Selina Kyle’s cat-a-strophic career as a playable character.

The 90’s comic book series ended up with a year-long run written by Bronwyn Carlton, a woman who’d never actually written a comic book before getting the job (and possibly never read one either).  How bad did this thing get before being cancelled?  So terrible that DC killed off the character just a few issues shy of the 100th issue.  It would be years before the character was deemed popular enough to star in a video game again. 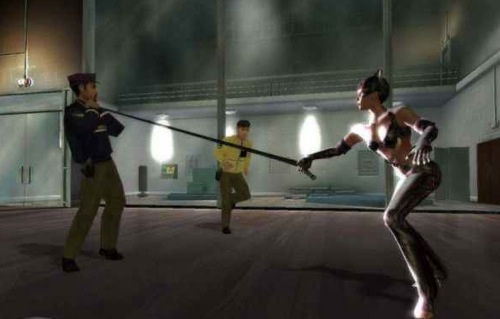 Unfortunately for both Selina and gamers, Catwoman’s next game was the tie-in to the abysmal Hallie Berry movie.  While this film did feature a Cat-like Woman, it had literally nothing to do with the comic book character, and neither did the game.  Despite being an okay game, it doesn’t really count, because the character featured in it is no more Catwoman than any other generic video game catgirl.

Finally, the Lego Batman series gave gamers a shot at decent gameplay, and a faithful representation of the character.  Although Catwoman wasn’t the star, she was a playable character for most of the game in Freeplay mode.  Granted the Lego interpretation didn’t exactly convey Catwoman’s sex appeal (she was a bit… blocky), but at least fans could enjoy the experience. 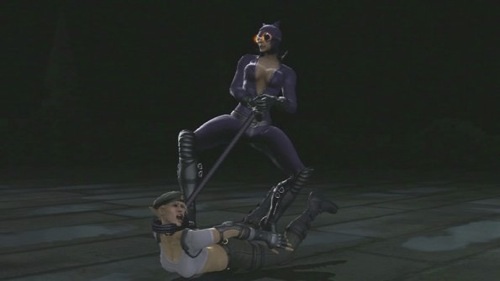 Now if you’re just dying for the chance to run around a virtual city as a vigilante/dominatrix/catburglar, and none of the above games appeal to you, there are some options like the many superhero MMOs, such as DC Universe Online.  While you can’t play as Catwoman (she appears as an NPC), you do have the chance to play as a cat-like woman slinking around Gotham City.  If the price of the game and the monthly subscription fee are too step for you, remember that Champions Online is free to play and as long as you don’t violate any trademarks, you can create your own knockoff Ca7woman and run around Millennium City with your pals B4TM4N and R0b1n.