Players Will Decide if Carmine Lives or Dies

Gears of War 3 is shaping up to be one of the biggest titles of 2011, it's a franchise that continues to please and manages to make huge strides forward with each release.

In a pretty interesting publicity campaign, Epic Games has decided to allow fans to choose whether a character lives or dies.

The Carmine family has had some pretty foul luck when it comes to military service. We were introduced to Anthony Carmine in the original Gears of War, whose career was tragically ended by a sniper round to the head. In Gears of War 2 the boys of Delta were given a rookie to train who just happened to be the youngest Carmine brother, Benjamin. Although green as grass, Benjamin showed a lot of courage against the Locust swarms but it was eventually his inexperience that separated him from Delta squad and caused his death.

In Gears of War 3 the oldest and most experienced Carmine brother, Clayton, joins the ranks and it's up to fans to decide if he makes it through alive.

Gear-Heads can now purchase special avatar shirts on the Xbox Live Marketplace to declare which side they support, each one only costing 80 MSP. If you really want to show your support you can buy one of the limited edition real versions of the shirts for $20 each on the NECA Club website. With proceeds from both going to the Child's Play charity, there really isn't a reason to not join in the fun. 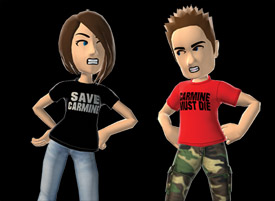 Each purchase counts as one vote and the contest wraps up on September 1st.

What do you think? Should Carmine live? Or should it come full circle and have him meet a tragic death?