"Pokémon Go get a 3DS"
By: Edward Oliveira | Mobile Reviews - Wii-U Reviews | July 14, 2016
Pokémon Go released last week and the reaction hasn’t just been phenomenal, but it’s been nonstop. Facebook walls are plastered with Pokémon Go posts like flyers on a community board. Celebrities like WWE Chairman Vince McMahon, John Mayer, Wiz Khalifa and Chris Hardwick are posting their findings with the game. Thousands of people participated in meetups. People are getting social, some for the first time in years. It outpaced porn searches and in more devices than popular games like Candy Crush Saga and Clash of Clans. It’s already one of the most successful mobile games in history. Kotaku cannot go an hour without posting a Pokémon Go-related article. Unfortunately, it hasn’t been all positive either with attempts of kidnapping or robbery, injuries, vandalism and trespassing, etc. All this for what though? 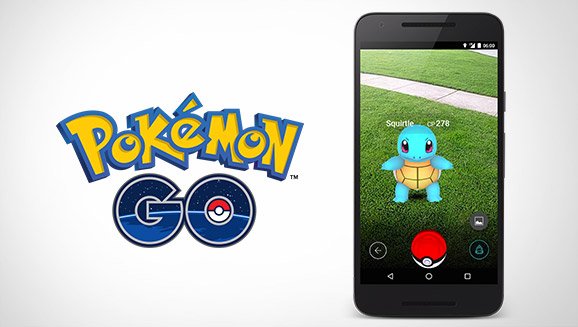 Pokémon Go isn’t a mainline Pokémon game as a ton of what you can do isn’t here. You don’t catch Pokémon to battle others or get badges. Pokémon Go as it's core is a real life form of the games’ Safari Zones, where you throw balls at Pokémon and hope for the best. And until updates like trading add more, that’s pretty much it. The gimmick is that developer Niantic used Google’s map-based features alongside tech they used in their past game Ingress to form a “Pokémon world” around you. Frankly you walk to a literal place to catch Pokémon as they stay there for so long. You can see what’s in the area and an approximate distance, but it’s all up to you to do the legwork getting there. You can also find PokéStops, which are real-life landmarks to gain experience, eggs that hatch by walking or items. There are also gyms, but unlike real Pokémon gyms with trainers and leaders, these are rarer landmarks where a player left a Pokémon to defend it. Taking it over allows you and your “team” based on the three original legendary birds to have it conquered until someone else does it. Battles are very light takes of what we see from handhelds as well. Simple phone taps and flicks are the Pokémon's attacks with no depth of the mainline games.

Catching Pokémon is as easy as flicking a Pokeball since none of the battling techniques of the regular games are nonexistent. The game uses the device’s camera and puts the Pokémon in the shot with augmented reality. Catching something increases your player’s experience. Catching multiple of the same Pokémon gains you candy and stardust needed to level up or evolve that line of Pokémon. Another item is the lure, and that’s one of the coolest things about Pokémon Go. These things attach to PokeStops and anyone can come over and reap the rewards, which is a better spawn rate. It’s neat because doing it in populated areas literally attract players as if they’re Pokémon themselves. It’s a freaking cool social experience, but it’s only as cool as long as people play it. When it does, you do feel you’re in an augmented Pokémon world. Since the game uses GPS tech to spawn the Pokémon, the area you’re in affects the Pokémon there. I live near the coast for example. I can take a quick trip to the beach for water Pokémon better than someone in North Dakota. I’ve also seen to an extent, Fire-types in gas stations. Since there’s no official guide on the game’s concepts, many of these findings are fan theories. Everyone can make an estimate how something spawns, but it seems something else just proves it wrong. Other than that it’s a weird spinoff, Pokémon Go is very unstable. Everyone I know has dealt with crashes when catching Pokémon, many times rarer ones. Crashes extend to going to PokéStops and gyms, sending Pokémon, logging in and more. The latest update has helped, but it’s far from a smooth experience. It’s the worst if you crash during the catch, and realizing you paid for that Pokeball with real money via the game’s microtransactions… Another huge setback is that the game’s only limited to the original 151 Pokémon. People with rose-tinted glasses that are playing to get their nostalgia kick will say it’s for the best. However many of the best looking Pokémon came after the 90’s. I’d love to see a Lucario, Durant, Zoroa, Shaymin, Bisharp, Keldeo, Ho-oh and more wandering around. Though to reflect, Pokémon Go is a free app meant to just screw around with Pokémon. The worst thing that can happen is that you can delete it after not having fun with it. Hopefully it lights a fire to make people play the real installments on the 3DS, since those have the depth worthy of the Pokémon universe. Those wishing for a Pokémon game without investing in a Nintendo system will be sorely disappointed though, but it was kind of the point.
Rating
3.0
Pros