By: Edward Oliveira | Wii-U News | July 16, 2014
The newest trailer for Pokémon Omega Ruby/Alpha Sapphire details some new and features of the game as well as introduce (or reintroduce) us to Hoenn’s gym leaders and Elite Four.

…or at least some of them. We know that Roxanne, Brawly, Norman, Wattson and Flannery all reprise their roles as gym leaders. While it’s a safe bet that Winona and the twins Tate and Liza will return, the real question is the eighth leader. It was Wallace in Ruby and Sapphire, but changed to Juan in Emerald. They also confirmed that Sidney and Phoebe are back as Elite Four members, and it’ll probably be Glacia and Drake as the other two, but again: who’s the champion? It was Steven Stone in Ruby/Sapphire and Wallace in Emerald.
It seems Pokémon Amie makes a return from Pokémon X/Y, but it seems Pikachu is getting a little extra love. They are giving it the ability to cosplay with several outfits, and perhaps use it in a contest. Pikachu can dress up as Pikachu Belle, Pikachu Rock Star, Pikachu Pop Star, Pikachu Ph. D and Pikachu Libre. 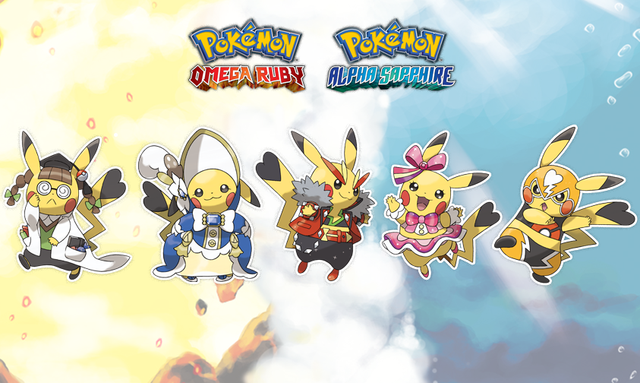 The Secret Bases return, but with a bigger twist. Now people can make their base and share them either via StreetPass or QR code. These bases can do a number of things, but you can now make it into a mini Pokémon gym under your own rules, and with you as the leader.
The last bit of the trailer shows off Mega Metagross. It is still Steel/Psychic and now has the ability of Tough Claws, which boosts the power of physical attacks.
Pokémon Omega Ruby/Alpha Sapphire will release on November 21st.