A lot of sequels add in more guns, more enemy types, or more explosions, but there’s one upcoming shooter sequel that’s adding in something else: More laughs.  The first Portal game had a few moments of dark comedy, but after a look at the first few minutes of the sequel in a video recently released in the wake of PAX East, it’s clear that Portal 2 is going to be crammed full of laughs.

Once again Players will control Chell, the protagonist from the first game.  At the start of Portal 2, the Player is taken through a simple tutorial in which Chell explores what looks like a nice hotel room, but is actually a cryogenic storage facility run by Aperture Science.  Next the player finds them self waking up in that same room to discover that it is decayed and neglected.  A looong time has passed and, apparently the facility hasn’t held up well.  Something is obviously wrong, and soon a panicky robot name Wheatley appears asking for help. 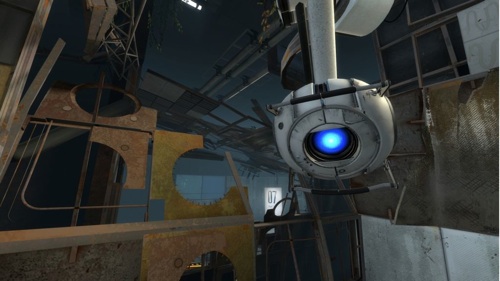 Wheatley is your sidekick through Portal 2, he is a “Personality Core”, a form of Artificial Intelligence, and is voiced by British comedian Stephen Merchant.  Merchant is a frequent collaborator of Ricky Gervais, and he’s six foot seven; as has been proven by Douglas Adams and John Cleese, in England height is directly proportionate to comedic talent.  No offense to Dudley Moore.

Merchant’s nervous, eccentric Wheatley is much more talkative than the doomed Companion Cube, and much friendlier that GLaDOS, the malevolent AI from the first game.  He has volumes of funny dialog; shortly into the game, the Player’s path is blocked by a brick wall, and Wheatley proposes a “Manual Override” of the wall.  By which he means just ramming his way through it.  According to Valve spokesmen at PAX East, Merchant provided far more dialogue and improvisation that the sound editors could fit into the game.

Also present in Portal 2 will be Cave Johnson, the founder of the fictional company, Aperture Science, which is responsible for the torturous training facility in which the games are set.  Johnson is voiced by JK Simmons who should be familiar as J. Jonah Jameson in the Spiderman movies, along with many other roles.  Johnson guides the Player through various levels with a sequence of corporate propaganda and motivational speech about employees volunteering to have their genes spliced with Praying Mantis DNA, then later invites them to help fight an army of escaped mantis men. 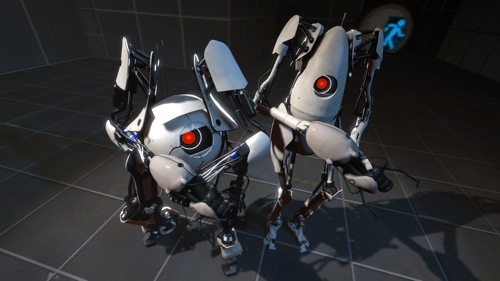 Who is behind all of this fun?  Well, Jay Pinkterton who writes for National Lampoon wrote for the game, as did Erik Wolpaw and Chet Faliszek, who wrote the first Portal game.  Their background in gaming satire and comedy shows through strongly in the footage seen so far, and Portal 2 looks to be one of the funniest games of the year.

But players shouldn’t expect a light-hearted romp.  Once again they’ll have to fight for their lives against GLaDOS, and the only way to survive will be by triumphing over series of deadly traps and puzzles.  Also returning from the first game is The Rat Man, some poor test subject who has made his way through a few of GLaDOS’ sadistic games, but found himself stuck in the facility living in the crawlspaces.  Now demented and hopeless, he leaves behind scrawled messages as hints for the Player. 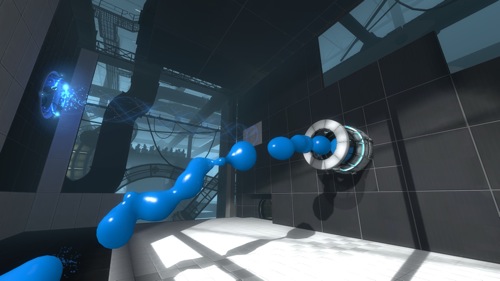 New to the Portal series is the much talked-about co-op mode that allows players to take control of a pair of adorable robots named P-Body and Atlas, who assist each other with their Portal guns in levels that can’t be completed alone.  There are also new gameplay features, like special gel which can increase running speed, or jumping height, like a stay-on trampoline.

With a solid history of ground-breaking gameplay behind the series, and some genuinely funny people on board, Portal 2 looks to be a must-have for fans of the first game.