By: | Comic Reviews | February 25, 2011
Pulling off the ultimate disappearing act, Maxwell Lord has erased his entire existence off of every mind on the planet - everyone except the Justice League International. However, how will Power Girl recruit more heroes in believing that Maxwell Lord is real, and is also a big threat? With Generation Lost/Justice League International coming to a quick stop, partnerships will be forged and sides will be chosen. Written by Judd Winick and artwork by Sami Basri.

The issue opens up with Power Girl having a recap of something that has happened in the previous issue. With the J.L.I. being the only heroes to know of Max Lord’s existence, they need backup and get some other, if not all, heroes to remember that Maxwell Lord is one of the most dangerous men on Earth. Power Girl meets up with Dick Grayson and tries to convince him that Maxwell Lord exists and that Ted Kord didn’t commit suicide. With very little success, it turns out that every time Dick remembers who Max is, he soon forgets the information given to him. Knowing that Dick will never grab hold of the truth, Power Girl leaves to go get some REAL proof that Ted wasn’t suicidal. 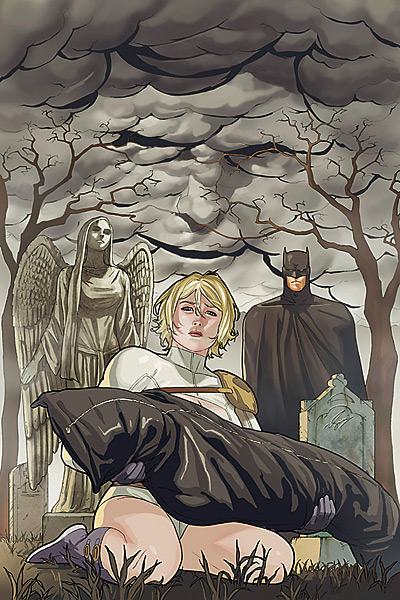 d development already sold to Day Work Industries, Nicholas and Simon Peter are trying to keep the little technology they have left. When matter inside of a containment unit becomes hazardous, Nicholas steps in and tries to save the project. However, due to an old boss of Nicholas who knows it is just a charade, Nicholas’ plan fails to save the equipment. Power Girl has a flashback of the night before Max Lord murdered Ted Kord. Ted was seen calling in the entire Justice League to see about a murder, but when there was no extremely good reason to call in the league, all of the members left. Power Girl mentions that Ted was onto something big and it ended his life because of it. When Power Girl brings Ted’s body to the Bat Bunker, she asks Dick to forensic mojo on the remains of Ted. While Dick refuses, Bruce steps in and Power Girl is amazed that he knows Maxwell Lord exists and killed Ted. In the end, Bruce and Power Girl leave to battle Max Lord, once and for all.

Having Bruce Wayne as one of the few heroes who knew Max Lord exists was really cool. If anyone can remember, Bruce Wayne can. Having Max trick everyone into believing that Ted committed suicide was also interesting, because really, Max can make anyone think Ted didn’t exist also. However, I guess Ted was the scapegoat of everyone believing that he wasn’t suicidal, but murdered. While I don’t like how most of Power Girl’s current stories lead in-and-out of Generation Lost, I do like how they give great spoilers on what happened in the past. It also seems weird that if Maxwell Lord didn’t exist, that means the Justice League International shouldn’t exist also?

Judd Winick is one of my favorite writers. He did an extraordinary job on Red Hood: The Lost Days, and also it is really cool to see his interpretation on Power Girl. To me, he seems to be more of a Batman writer, but I am always glad to see what it would be like if you took a really great Batman writer, and placed them on a Superman book or something of that nature. Because his focus is more on Power Girl and her relationship with her friends, family, and team members, it took out the comedic laughs that Amanda Conner and Jimmy Palmiotti had during their stint on the comic.

Power Girl is a good comic series that has a strong tie-in with Generation Lost. With Maxwell Lord to be coming up against Power Girl, Justice League International, and Batman (Bruce Wayne), you won’t want to miss that action! This will be continued in the pages of Generation Lost #22.