By: Justin Moody | TV Features | August 31, 2010
Last night's 62nd Annual Primetime Emmy Awards, hosted by Jimmy Fallon, thrust the sextogenarian aged program to the forefront of the new generation. It was clear that one of the aim's of this year's awards was to try and make it more personable, technology integrated, and filled with "Glee".

The show kicked off in great fashion with a musical opening inspired by the hit FOX program. It featured show stars Lea Michele, Chris Colfer, Jane Lynch (who were all nominated for their roles in the program), Cory Monteith, Amber Riley. In a certain twist of fate, they also got Tina Fey (30 Rock), Jon Hamm (Mad Men), Joel McHale (Community/The Soup), Jorge Garcia (Lost), Nina Dobrev (The Vampire Diaries), and, rather unfortunately, Kate Gosselin to participate in 'The Boss' inspired opening to the program.

Fallon excelled at awkwardly integrating tweets into his introduction of presenters; most of them innuendo based - almost makes me uncomfortable to think of Fey, "I'd Hit That." Despite his best efforts at trying to bring the humor into this new format, I think that these sections of the show were plain old odd; from his uncomfortable way of reading them, to even the concept in general, which I heard was included at the behest of NBC execs. The program also had another way of introducing the nominees; pre-recorded Q&A's which helped to add some personality to the show. 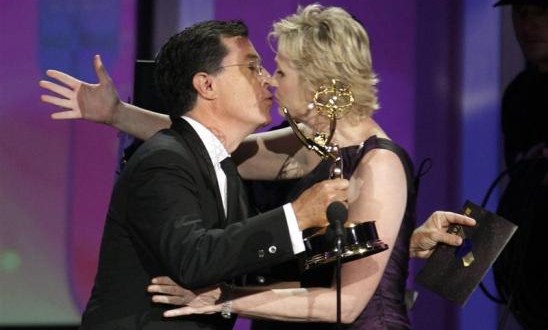 Something I did enjoy out of Fallon's hosting gig was his further integration of music into the program, with the three song tribute to 24, Law & Order, and Lost and the introduction to the category montages. Fallon knows he's not that funny of a guy, so it was certainly a wise decision on his part, to take refuge behind his guitar and get the laughs where he knew he could. Things got a little camp with the seemingly requisite inclusion of a Kardashian into a Reality TV montage intro. The Emmy's, however, are not entirely about the goofy guy they hired to smooth the transitions between categories and bring the laughs; though Ricky Gervais did an excellent job at doing just that (!), too bad he hosts the Golden Globes...

Notable wins of the night came in the form of the Edie Falco (Nurse Jackie) and Jim Parsons (Big Bang Theory) upsets in the Lead roles for a comedy series. Both were in great company in their category and I certainly took Parsons as an underdog, compared to the powerhouses Alec Baldwin (30 Rock), Steve Carrell (The Office), Tony Shalhoub (Monk), and Larry David (Curb Your Enthusiasm). I left Matthew Morrison (Glee) out on purpose. As Falco pointed out, she's not funny, but she beat out three SNL alums, plus Glee girl, and Toni Collette (United States of Tara), who should have won the category.

The big stories came in the form of ...