At what point is a child a wholly separate entity from it's parent — or can it ever be? It's been 33 years since Alien, time enough for someone to become their own person and begin having offspring of their own. Alien, being the groundbreaking bolt out of the blue that it was, didn't have inherited expectations to live up to. When Ridley Scott announced he would be making a prequel, it had many cautiously optimistic. When that idea soon evolved into something wholly different but with some traces of Alien DNA leftover, who knew what to expect.

You won't need any paternity test to find the origins of Prometheus, a film all about questions of parentage and origins. It opens with a translucent humanoid offering up its body to create a primordial ooze, on this planet or another, it's not clear but it is provacative. Who are these beings? What is their purpose in creating? And why would they leave us all alone? Lacking nothing for ambition, Prometheus inherits philosophical aspirations from one parent (let's say Blade Runner) but when transposed onto that Alien DNA, the result is a clumsy, laborious hybrid that frustrates as often as it astounds. 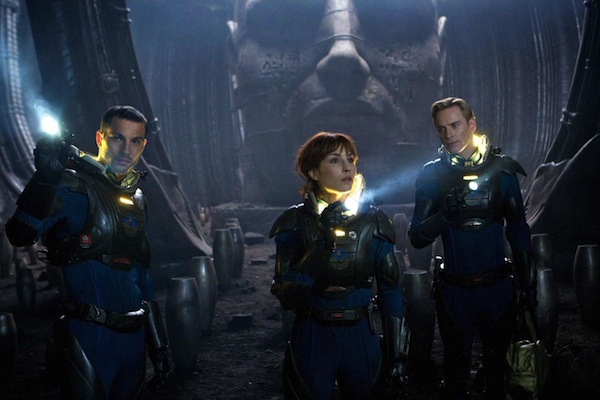 Alien fans will pick up on the little connections immediately, like how the title appears line by line, and how the titular space shuttle's manifest has old school computer font, before the largely identical set-up takes over. A crew following an ancient pictogram as a star map is led to a distant moon, where the presence of alien life is confirmed almost immediately by ruins of an unknown structure, some sort of a crypt or a bunker. Leading the expedition is scientist Elizabeth Shaw (Noomi Rapace), who wants to believe that our real makers are somewhere on this planet, despite holding a crucifix quite dear.

She's not really our lead, at least not for a long time, as the cast is so deep that we jump back and forth between characters as often as they go from dry-dock to moon-side and back, which is frequent. We get hints at the motivations and personalities of the crew, like the frosty coporate representative Meredith Vickers (Charlize Theron, making last week's role as the witch in Snow White and the Huntsman seem delightful by comparison), before checking in with someone else. "Is there an agenda?" Shaw's lover Charlie (Logan Marshall-Green) asks Vickers. Given Weyland Industries' track record, he should be asking what the agenda is, not if it exists. 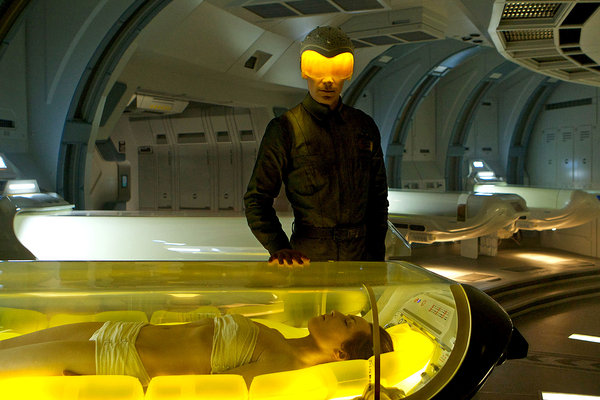 Ambiguity is Prometheus' bread and butter, which is bold when tackling its greater themes of man's origins and where it is we come from but refusing to settle on one answer. Unfortunately, too much of that haziness worms its way into the plot as well. Screenwriters Jon Spaihts and Damon Lindelof move things along through sporadic, episodic events that lack sufficient character motivation, explanation, or both. A sandstorm forcing everyone back to the ship is fine, having part of the crew get lost in the tomb is convenient, but having the captain nonchalantly inform them that there's something awake and moving inside with them is just perplexing.

The confusion is less frequent in the film's most dynamic character, the android named David (Michael Fassbender, giving another standout performance), though even he seems more capricious than programming should allow. He's served his human masters diligently during their two-year trip, but has he developed a HAL-like distrust for his masters? "Don't all children really want their parents dead?" he asks with a hint of… menace, or maybe just honest curiosity. It's hard to tell. He seems as interested in finding this species of "Engineers" as Shaw, having studies them for years, which makes for a rather convenient explanation of how he can understand an alien language and their advanced technology, where buttons look like hard boiled eggs and Picard's flute acts as some kind of password protection. 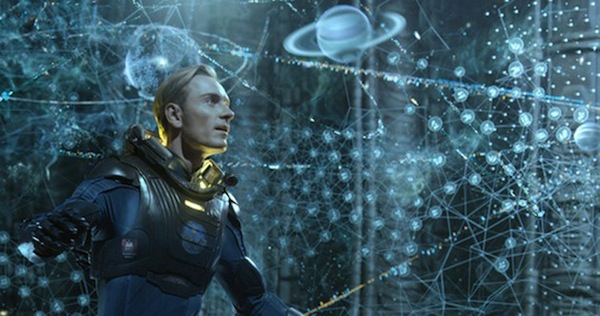 Those are among the only quibbles that one could find with Prometheus as a production though. If nothing else, Scott's knack for gorgeous visuals remains intact. The open vistas of Iceland are awe-inducing and shots of a rolling river are among the most immersive the 3D format can provide. The ship's innards and equipment are at the halfway point between current technology and when functionality is cetain enough to allow for some style. Little details, like how the sound of David combing his hair conveys it's falsity, keep Prometheus' immaculate aesthetic and design in your head at all times.

And while the action is stellar at creating thrills and stomach churns, the story denies satisfaction at every turn. Where Alien built on atmosphere before delivering a singular tale of survival amidst the universe's worst nightmare, Prometheus struggles to balance its visceral vision with it's philosophical one, and it's beloved heritage only serves to undermine the present product with flashes of old brilliance. Like its enigmatic android, Prometheus looks the part so well that in moments, you can mistake it for the real deal, before the mechanisms begin to lumber away again, trying to find a soul and an identity within the uncanny facsimile.

Max thought: "I'm hard pressed to think of the last quality sci-flick we've gotten (District 9?), and thankfully Prometheus fits the bill. It's good to see Scott back in familiar territory with one hell of a budget to play with this time around. The world of Prometheus, from its landscapes, ships and architecture, is gorgeous, fascinating and engrossing, and if your setting isn't any of these things, your sci-fi flick is dead in the water. Mercifully, there isn't a weak link in the cast (Fassbender shines) and Rapace steps up her game as a badass leading lady. While the movie asks a lot of questions and never fully answers them, it still satisfies. As for it sharing "DNA" with the "Alien" series...bullshit. This is an Alien prequel. Maybe not the most direct prequel, but a prequel all the same. It's less a horror story and more of an adventure tale, but there is just enough of the creepy factor/atmosphere to remind you that in space...you're already screwed." Rating: 8/10

Kieran thought: "There is a backlash toward Prometheus over its hype, but I still enjoyed it. It attempts to be a bolder sci-fi film that focuses on ideas and not just action or horror. Prometheus has a very similar idea and start as 2001: A Space Odyssey; man explores alien influence on its origins and the messages they might have left, but this one takes a much darker route then in the Kubrick classic. There is an excellent cast, particularly Fassbender as the android David with his own agenda and lack of morals, and Noomi Rapace is a strong lead as scientist balancing scientific beliefs with her faith. Despite a small role, Idris Elba was also fun and engaging. There are some wince-inducing scenes (a note to pregnant women, do not go and see this movie) and problems with the script, which takes an episodic approach as it builds up on twists and leaves questions unanswered, but that is why there is sequel baiting and sadly leaves plot holes. A Scott director's cut will be interesting for this one." Rating: 8/10

Steven thought: "This film dares to ask bigger questions about creation and the purpose of life while thrusting us into an un-fathomable sci-fi mystery rather than a moody horror opera set in space. Yet for every way it is different, Prometheus also feels like Scott's homage to his own work, as if he too was fascinated with the lore he helped create. The film completely propels itself on fascination, hoping that its audience has a strong scientific curiosity and a nose for wonder and imagination. The impact of Lost writer Lindelof on the script is apparent, as with more knowledge comes more questions, questions that sometimes get in the way of themes and character building, but never stop awing. No doubt about the strength of the performances as well as the visual mastery in terms of production design and visual effects. Prometheus invites its comparison to Alien despite being such a different film, and that's where it will divide people. This one is much more for the imaginative science-fiction geeks in the crowd." Rating: 8.5/10

John thought: "To make a film that seeks answers to questions of mankind's origin is bold; to shoehorn that film into a maybe-it-is-maybe-it-isn't Alien prequel is bold to the point of being a little foolhardy. Alas, this is Prometheus, a film so steeped in mythology and mystery that it's bound to disappoint a little every time it offers an "answer" to one of its many profound questions. Still, when Prometheus misses, at least it does so swinging for the fences. It might not be the game changer many were hoping for, but you likely won't see anything else like it this year, which definitely makes it the toast of the summer movie season so far." Rating: 8.5/10

Simon thought: "Prometheus is easily the closest we’ve gotten to pure, traditional science fiction in quite some time. Scott’s latest is far more in the vein of 2012: A Space Odyssey or Forbidden Planet then something like Men in Black or Avatar and I couldn’t be happier that it is. Scott is able to blend together heady themes like religion and evolution without becoming preachy or alienating a particular group, all while delivering a thrilling and well-acted Alien prequel worthy of the originals. What I appreciated most is that while Prometheus offers up many poignant questions, it provides few of the answers. If there is a sequel it’s reasonable to assume future light will be shed on some of these topics, but for now, speculating and discussing with others on the themes posed is even more rewarding than just the film itself as a standalone work of sci fi." Rating: 8.5/10