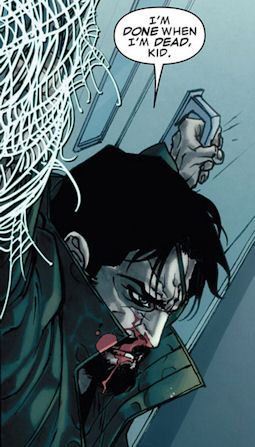 Basically resuming his run on Punisher, Greg Rucka picks up right where he left off. Punisher, still with the eye injury and beard, is trying to keep a low profile after a massacre was dropped in his lap by one of his targets. Cops have died, and Punisher no longer benefits from the authority’s blind eye as much as before. Being comics, things clearly have to get worse. Enter the Avengers, who turn their eyes onto Frank Castle.

Obviously, Punisher: War Zone works best for people who were reading the Punisher series that just came to an end. It’s not a necessity, though. The recap page, taking the format of the Daily Bugle, does a good job of covering the basics of what happened to set all this up. Punisher teamed up with a former Marine named Rachel Cole-Alves for a strike on the Exchange, and things went colossally bad. Rucka wisely didn’t overcomplicate things. There was a lot of internal character stuff going on, but the basics remained fairly straightforward. What it all boils down to is that Frank has gotten the attention of people he would have rather avoided.

The issue begins with a confrontation between Punisher and Spider-Man. The friction between these two character has always been natural, and Rucka plays them off each other well here. Spider-Man is one of the few major heroes in the Marvel Universe with a moral code strongly against killing, and Frank has given him a better excuse than usual to go chasing. Beyond the talking, I enjoy how the fight goes down as well. Rucka remembers what Spider-Man is capable of, which is something many writers tend to forget. Spider-Man is physically superior to a normal person in pretty much every way. Even with Spider-Man not having much in the way of real fighting skill, a non-enhanced person would need some really extraordinary skill to have any chance against him one-on-one. Punisher’s formidable but not at that level. Rucka shows this but allows dirty tricks to level the playing field.

There is, however, one problem that nagged at me for this whole scene.

How did Spider-Man find Frank in the first place? It goes unexplained. He’s not Batman. He’s known to be smart but not in a detective way. Yet, Spider-Man seems like he homes right in on Frank. Keep in mind that this is Frank when he’s making an extra effort to go undetected. This is the most unlikely time for Spider-Man to be able to find him. So to have this happen without any explanation hurts the scene.

Moving away from that problem, Spider-Man has a key role in this story, because he’s basically the whole reason the Avengers are going to come after Frank. That’s really important, because the Avengers do need a reason. I know the common criticism from writers and readers alike about Punisher in the Marvel Universe has been that he shouldn’t last ten minutes with all the superheroes around. That... has never made any sense to me. What superheroes are going to give him trouble? The Fantastic Four wouldn’t. The X-Men wouldn’t. And under ordinary circumstances, the Avengers would. Superheroes are busy people, especially the major players. They’ve got aliens, world conquerors, gods, demons and robots to worry about. They have neither the time or inclination to turn their attention to street crime in any major way, and the few superheroes who do operate at the street level aren’t really as capable of putting an end to Punisher.

Rucka seems to get this as well, and so he uses Spider-Man, one of the street level heroes who would clash with Punisher, to get the ball rolling. Spider-Man happens to be an Avenger now, and he logically puts that status to use when his own attempt to grab Frank doesn’t really work out. Spider-Man is really one of the only heroes who can make a case against Frank without coming off as hypocritical, because as I’ve said, he’s one of the rare Marvel heroes with a strict policy against killing.

I actually really love the Avengers’ reactions to the idea of going after the Punisher too. It really backs up the idea that they normally wouldn’t give him a second thought. It’s not just the arrogant belief that it would be beneath them either. A lot of it goes unspoken, but among the Avengers who assemble to hear Spider-Man out, I imagine very few are all that opposed to what Punisher does. But that doesn’t matter so much when you have Captain America in that room too.

This is also a good issue for Wolverine. The character has kind of come off as a petty hypocrite lately with his behavior in Schism and Avengers vs. X-Men, and there really is opportunity for more of the same here. As Spider-Man is the best person to want Punisher brought down, Wolverine is the worst. Thankfully, Rucka has Wolverine own up to that fact and behave accordingly.

I do miss Marco Checchetto’s art from the ongoing series, but Carmine Di Giandomenico doesn’t do a bad job taking over the reins. There is one thing, though. ...What the hell is Tony Stark wearing? I’m sorry. It’s just distracting as hell. Tony’s flamboyant appearance is just so hard to ignore as this big scene with the Avengers is going on. The white suit, the sunglasses, everything.

The first issue of Punisher: War Zone sets up the conflict between Punisher and the Avengers in an intelligent way. There’s no wondering why it hasn’t really happened before since we have Spider-Man using his relatively new role on the team to bring it about. The Avengers’ individual reactions tell the whole story in an understated way about why they’ve never bothered to do it before. This may not be one of the more high profile Avengers-related stories lately, but it has the potential to be the most interesting.