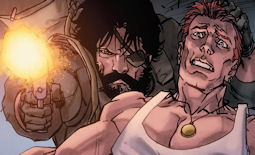 After three issues on the run, Punisher brings the fight to the Avengers and proves how he shouldn’t be underestimated. Greg Rucka and Carmine Di Giandomenico use this issue to bring everything together and gear it all up for the big finale. The Punisher has taken the bait and come for Rachel Cole-Alves, his condemned partner. But that doesn’t work out like the Avengers’ have planned.

Thanks to his Punisher run, Rucka has come into this Avengers vs. Punisher story with a great angle that makes it so much more interesting than a plain versus story. The fate of Rachel Cole-Alves, one of the major characters from Punisher, makes all the difference. So even as the Avengers go after Punisher, he is actually going after Rachel to save her from paying for his crimes. It’s a more feasible and compelling conflict to work with. Because what else would we have Punisher doing? Going after the Avengers? We all know that would only end in a cop-out.

In a low-key way, this is the Iron Man issue of Punisher: War Zone. We’ve seen the perspectives of Wolverine, Black Widow and Thor when it comes to Frank Castle. It’s Iron Man’s turn now, even though he really doesn’t appear much in this issue and we get no direct one-on-one between the two. That’s part of the point. Tony Stark does not take Frank Castle seriously. He feels the Avengers are above dealing with who he views as just some guy with guns. As he says, Punisher is no Hawkeye, and that should say it all about how badly Tony misunderstands who they’re dealing with. Some Iron Man fans may feel their character got the short end of the stick here, but really, this is how it has to go down. He brings it on himself.

Besides Iron Man, Rucka touches on the varying opinions of the other Avengers when it comes to Punisher. Most have already been established, but it’s nice to review it once more right before the end of the story. It’s all pretty true to the characters too. We see Captain America seeing the best in Frank Castle, believing that Frank won’t letter Rachel take the fall for him. Black Widow takes him deadly serious as a peer, predicting what he will do next based on what she would do. Wolverine gets sidelined from the fight because he doesn’t honestly have any problems with how Punisher goes about his business.

Even though Captain America’s plan to capture Punisher doesn’t work, it’s still a perfectly sound strategy. I appreciate that Rucka doesn’t have to dumb Captain America down in order to keep Punisher going. His plan is good. It just happens to get outmaneuvered. It’s not over either. Punisher may have dodged the Avengers this time, but he is far from out of the woods.

I enjoy Di Giandomenico’s art, but man, he has some eccentric ideas about what Tony Stark looks like. Or maybe it’s the doing of Matt Hollingsworth on colors. Because we’ve got Stark once again in a bright red suit and orange-tinted glasses. The man dresses like a Las Vegas pimp. It’s kind of hilarious.

The stage is set for the Punisher: War Zone’s big finale. Yeah, Daniel Way’s less than awesome Thunderbolts has basically spoiled that nothing of any consequence happens to Frank Castle as a result of all this. But I know I’m personally happy to ignore all that and just enjoy where this story is going. What’s coming is the conclusion to one of the best Punisher runs I’ve ever read.