Punisher’s conflict with the Avengers ends the only way it really could have ended, and that is more than fine. Punisher: War Zone has never really been about the destination as much as it has been about the journey. We all knew going into this that Frank Castle was not going to take out Earth’s Mightiest Heroes. This was always about seeing him try, seeing him face to face with them and seeing what he could accomplish before the end.

By this point, the story has revealed itself not to be about Punisher saving himself from the Avengers but rather saving his former accomplice Rachel Cole-Alves from the death penalty for his crimes. The primary problem with that is the Avengers won’t let him just do this and walk away. They knew he was coming for Rachel. He knew they knew he was coming for Rachel. Both made their plays in the previous issue with Punisher coming out ahead, and now, there is nothing left to do but finally have the Punisher versus Avengers battle this limited series has been building toward.

What makes Punisher: War Zone work so well is that Greg Rucka doesn’t insult the intelligence of the readers or the characters. It’s all too common with versus stories like these that a writer will criminally dumb down and weaken certain characters to favor the star of the book. Rucka deftly avoids this trap. He doesn’t expect anyone to believe that Punisher can take on Iron Man or Thor. At most, he asks you to buy into the prospect that Frank can hold his own well enough against Black Widow and Captain America. He expects you to believe that Frank can use some smart tactics to draw out his eventual defeat. There’s no expectation that you should ever feel Iron Man or Thor are in any real danger. Although, Rucka sure does get some fun out of Iron Man’s paying for underestimating Frank, and it plays well as a bit of a running gag through the issue.

But man. When the Avengers’ net closes in on Frank, it closes on him hard. The brutally with which the Avengers bring the Punisher down is harsh but totally in line with the story. How else could Frank Castle be taken down but hard? The strongest part of it is how Captain America brings it to an end and does so without really ever making an attack on Punisher himself. It really is such an incredible shame that Rucka is no longer working for Marvel, because he really has shown off a fantastic grasp of Marvel’s top characters. 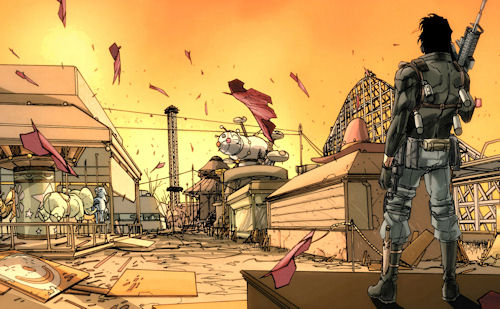 Carmine Di Giandomenico performs well on the art chores once again. The same goes for Matt Hollingsworth’s colors. One scene in particularly I enjoyed thanks to a certain detail I’m not sure whether was included by Rucka in the script. As Rachel changes out of her prison jumpsuit in the presence of Wolverine and Punisher, there’s a nice but kind of subtle detail that shows Logan leering while Frank is completely uninterested. It’s just a nice moment that capture the two males’ personalities perfectly. 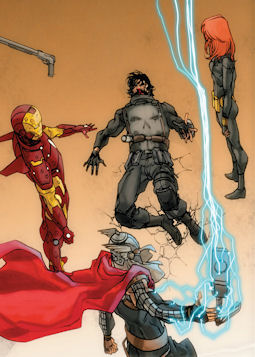 It’s such a sad thing that Rucka’s Punisher run had to end this early, and it’s a testament to Marvel’s current way of running things that they couldn’t keep enough eyes on Punisher in its current event-laden publishing plan. While this still works as a strong ending to the overall run, it’s fairly obviously things aren’t playing out as Rucka originally intended. There’s no doubt that the journey to where Rachel ends up here should have taken longer than it does, assuming she was even originally meant to go this direction at all. I imagine the trial of Rachel Cole-Alves, aka the proxy trial of the Punisher, would have played out more like an overarching “second season” for the Punisher series than happening largely unseen in a five-issue story.

Honestly, the worst thing about the end of Punisher: War Zone really isn’t its own fault. It’s the fault of Marvel. To think that the next chapter of the Punisher character after where this story leaves us is Daniel Way’s Thunderbolts, a series far more boring and lackluster than it has any right to be, is almost enough to cause a blood vessel to pop. I’m not even sure how to reconcile how Punisher can go from where he ends up here to being recruited into the Thunderbolts by General Ross. What an utter waste. It would have been so much better for Marvel to have benched the character for awhile only to bring him back with some kind of big breakout story.

Regardless of how poorly Marvel has managed the surrounding factors, this remains an excellent ending to Punisher: War Zone and to Greg Rucka’s overall run with the character. I will be pissed if this all never gets collected into an omnibus, because it unquestionably deserves to be. This has easily been one of the all-time best runs for the Punisher, rivalled only by Garth Ennis’ long and expansive tenure with the character. It should be required reading for anyone with even the remotest interest in the Punisher.