By: Edward Oliveira | Wii-U Reviews | June 24, 2014
To those complaining that Nintendo hardly makes new IPs, look at the eShop for the 3DS. They’ve made a bunch of new types of game concepts that we’ve never seen before. The gaming giant published games like Rusty’s Real Deal Baseball, Dillon’s Rolling Western, Sakura Samurai and more and have all been received well. One in particular was really well liked by its fans and that was a nifty little puzzle game by the folks behind Fire Emblem, Pushmo. Now Nintendo brought the game to Wii U in Pushmo World, and it’s the same game just on a different console.

Pushmo is a pretty simple puzzle game, but difficult to master. You have to get to the top of a level by pushing and pulling blocks that has represented a design of some sort. You can pull from the front or the side of it and other mechanics come into play later in the game, like some places have small warps that bring you to another part of it as long as that part is pulled out without obstruction. Thankfully if you mess up, there’s a Prince of Persia-esque rewind system in place to help you undo some actions without resetting everything, which you could also do.
While there’s over 200 puzzles, Pushmo World start off too easy for too long, where you have to dominate around 50 puzzles before you tackle something brain-teasing. Once get into it though, you’ll be trying every combination possible to try to beat these puzzles. Pushmo’s ingenious because after those easy puzzles, you’d never think you would have to rethink the concept of those basic mechanics then you’re in a gigantic puzzle. 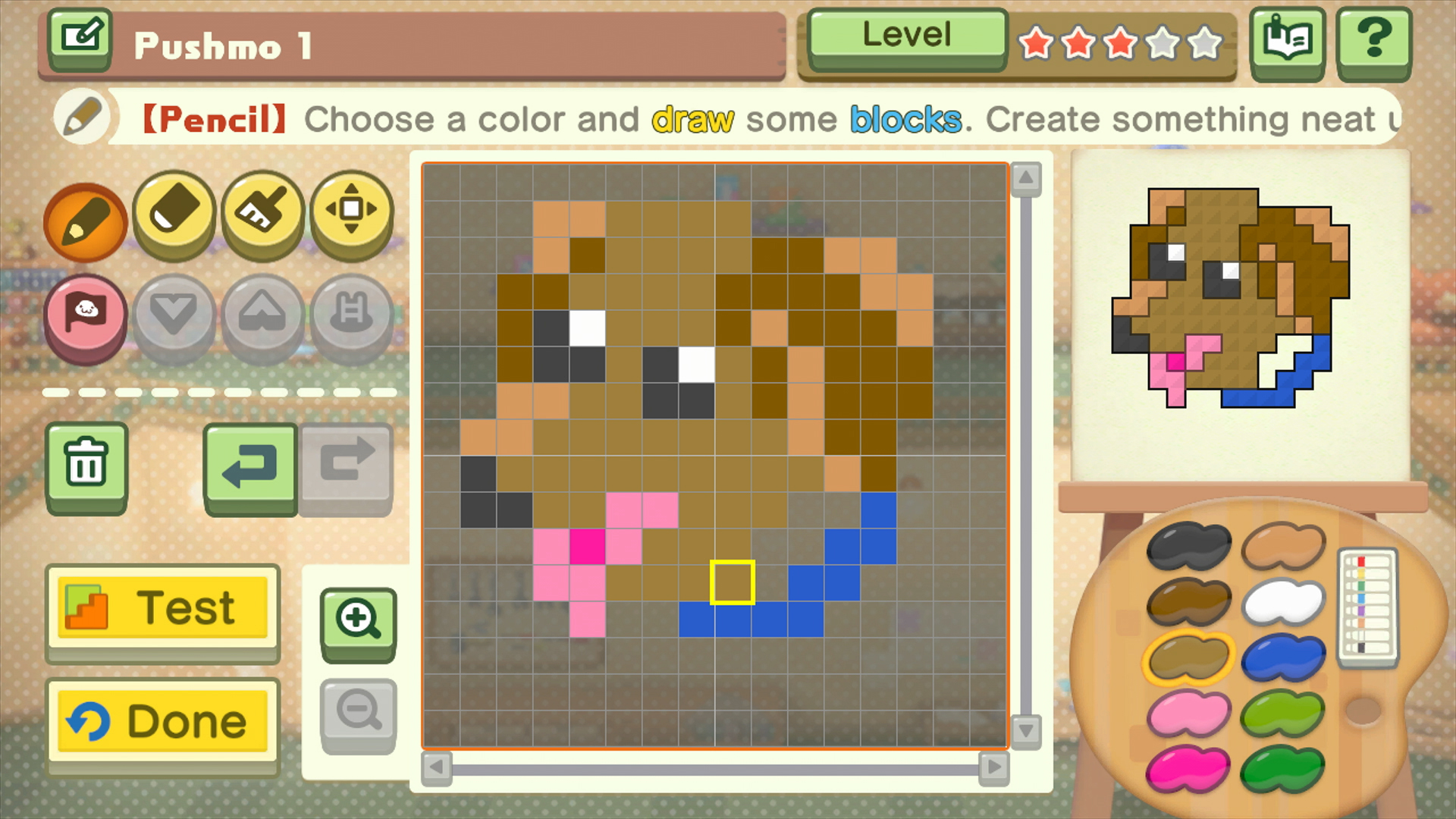 Also included in the Pushmo games is the Pushmo Studio, where you can build your own level and playtest it until it’s as nasty as you want it. The execution to this is fairly easy: draw a picture and playtest it. Once completed you can share them online via QR codes. If anyone wants them, it’s as simple as snapping a pic of it in the game and watching the level load.
Of course if you have it on 3DS, you might as well wait until someone puts all of these puzzles in QR form because Pushmo World is exactly the same as the original Pushmo on 3DS. That’s the biggest issue with it is that it’s on Wii U, but doesn’t add anything being on it. Mainly because it feels a bit inferior playing it on TV since a big TV doesn’t result in a more casual puzzle experience than a handheld, and mainly because the game isn’t in 3D, which made the puzzles pop on 3DS. If it had some nifty new mechanic, like its 3DS sequel Crashmo did, I’d say it’d be cool to have the new game on Wii U. However in all honesty, you can save the money by waiting for someone to make the puzzles on Pushmo Studio.

If you don’t have a 3DS and want to try Pushmo, then Pushmo World is right up your alley, but those who have played it before will encounter a little too much déjà vu. It’s fun and challenging, and is expandable thanks to custom level design. But stay away if you have it on 3DS since your experience won’t be different other than staring at two bigger screens.
Rating
7.5
Pros