It’s here! R.P.M. #4 is the last part of this action-packed story written by Shane Riches and legendary wrestler and The New York Times bestselling author Mick Foley. In the previous issue, Paul went out on a rescue mission to save Mackenzie from Dominic. He also discovered who was behind all of Paul and Mackenzie's surveillance and who was responsible for having Dominic switch sides on his mission. His name is Malumbo, an Angolan diplomat who is trying to retrieve the synthized diamond so he can blackmail Trent into giving him his company and also keep all the mines of Angola all to himself. Paul successfully rescues Mackenzie, but it's revealed that Malumbo has another card to play in his devious plot. It so happens that Malumbo has kidnapped Paul's father as well, and in return for his father Malumbo wants Paul to trade Mackenzie for her and the diamond that he is supposed to deliver in Miami. Paul rejects this offer and is helped in his escape and now he is on a mission to not only finish his contracted job, but also save his father.

R.P.M. #4 does not disappoint one bit. As in all the other issues, the action in this book is nonstop and it starts from the first page. The issue starts by showing you Paul just kicking butt in the entire compound. It also shows you how great Paul is with his enhanced perception, and because of his great gift he can get out of any situation. He goes by each area of the compound knocking people out and finally finds the place were Dominic is hiding his father. The two have a knockout, drag out fight and eventually Paul beats Dominic and rescues his father. 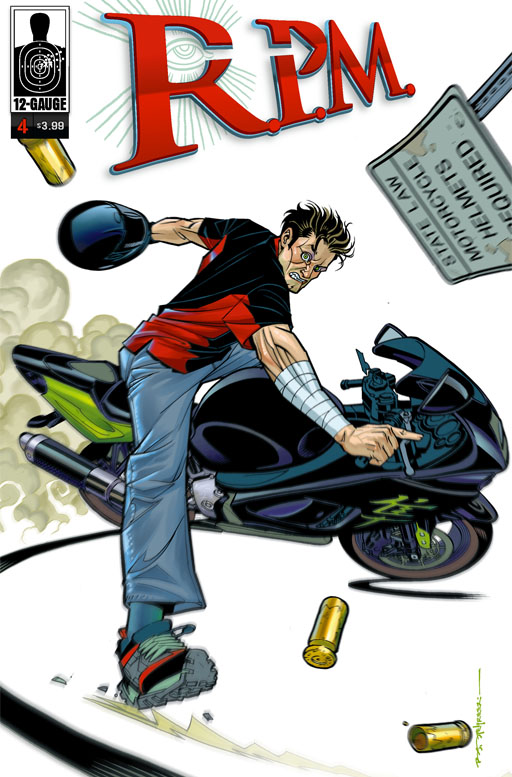 After rescuing him, Paul has one last thing to do before finishing his job. He needs to deliver the diamond that was given to him in the first issue. Paul goes into the building and is once again met by Dominic; this time they are in an elevator and another brawl ensues. Both guys are just beating the daylights out of each other. They get out of the elevator and they both continue to just kick each other's butts. The brawl is stopped by Trent and Malumbo and a whole lot of Malumbo’s men. Paul is shocked to see both guys together; Trent came to terms with Malumbo and now he wants Paul to give Malumbo his diamond so that Malumbo can profit even more than before, being that they now work together.

Paul can’t believe it so he plays a trick on both of them. Apparently he had already finished his delivery thanks to the service of UPS and the diamond that he gave them was nothing but a fake.  He also manages to compromise both Trent and Malumbo's partnership and records their entire conversation. Paul had alerted the authorities of his plan and now they can arrest Malumbo for his crimes.

R.P.M. was a very entertaining comic. There were some points in the book where it felt a bit choppy transitioning from one book to the next or from one sequence to another, but the action and the cleverness on some of the storylines kept me reading. At one point I found it very "Mick Foley" when they were heading to the elevator and Paul says, “Testicular fortitude going up?” I chuckled quite a bit at this seeing that he was giving his voice to the book, and the fact that Paul is telling this to Dominic who looks exactly like the legendary hardcore wrestler made it that much cooler.

Overall I would say pick up R.P.M. This book does deliver on all the intense action and it also has some nice witty dialogue that has made Mick Foley and Shane Riches into a great writing team.