By: Justin Moody | Comic News | September 24, 2010
If you’re a Facebook fan of Radical Publishing, you could easily win free signed comics from both Rick Remender and Clint Langley. All you have to do is read and post a review on Radical Publishing’s Facebook Fan page for DRIVER FOR THE DEAD #2, on sale September 29th. The reviewer with the greatest number of both “likes” and “comments” will win:

Created and written by John Heffernan with illustrations from Leonardo Manco, DRIVER FOR THE DEAD has already received overwhelming praise since the first issue hit the stands. 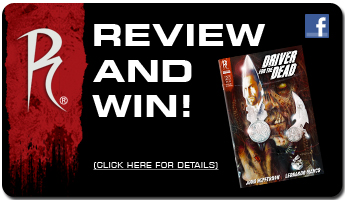 "If you’re looking for a fun ride, look no further. DRIVER FOR THE DEAD #1 literally puts the pedal to the metal, plows through anyone (or anything) in its way and never looks back." - Fangoria

"... Writing and visuals that are virtually cinematic in caliber and scope." - Philadelphia Daily News

"Hang onto your seats because DRIVER FOR THE DEAD promises to take you on a helluva ride." - Buzz Focus

Each Facebook account is limited to one review and the deadline for reviews is 12:00 A.M. PST on October 5th. Contact your local comic book retailer to reserve your copy of Driver for the Dead #2 and inspire your network of friends to help you win.