Rango takes place after the events of the movie.  You play as a chameleon who is sheriff of a desert town call Dirt.  Rango is in the local salon where he is then approached by one of the towns people that have found a mysterious rock.  Rango then goes on to tell a tale of each time he has encountered one of these stones.  Each tale he tells is broken up as a level in the game.  Almost all of the game is told in the past tense.  Come to find out that these rocks are part of a meteorite that has been spread across the desert.  So you take on the task of collecting these rocks along with trying to catch your nemesis Bad Bill. 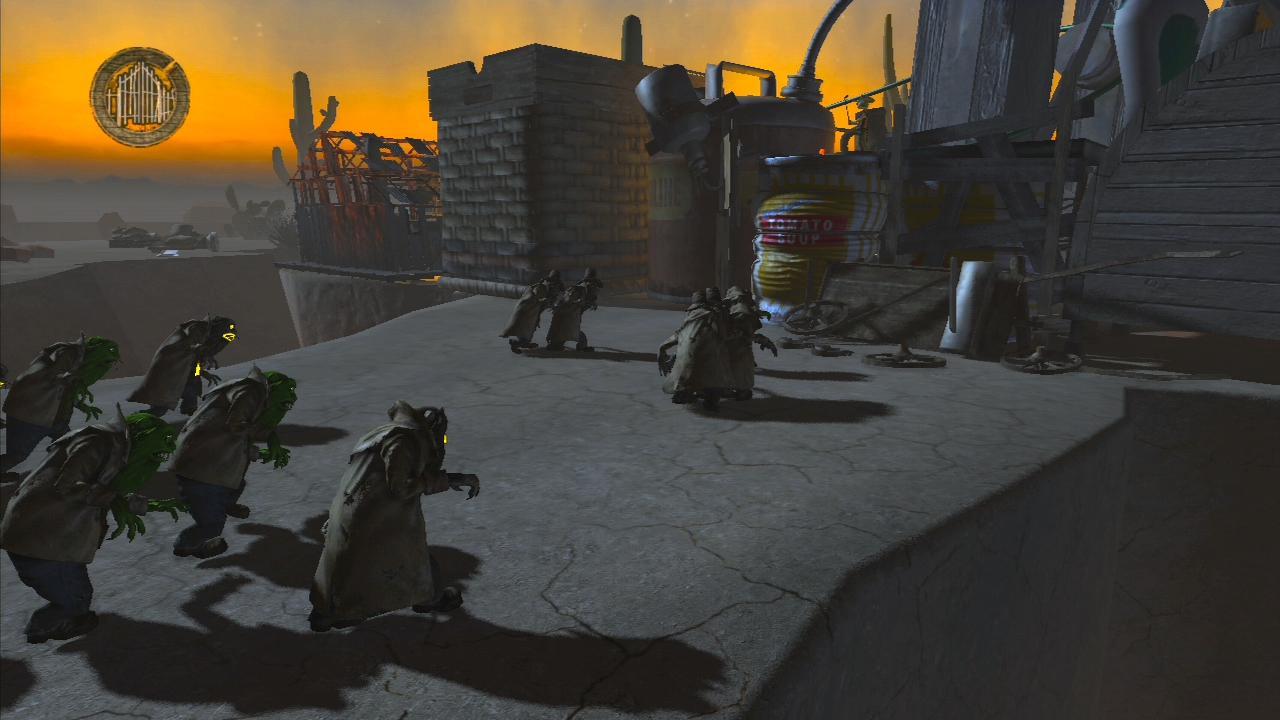 For a third person action platformer, Rango takes heavy influences from other games and jams them into its own game.  The biggest influence you will notice is that the game plays like Ratchet and Clank.  You have some melee moves but everything is tied to one button press.  There aren’t very many different combos you can pull off.  Rango is also equipped with a gun that has infinite ammo.  The gun automatically reloads after a brief couple of seconds.  You are also able to strafe and fire at the same time which makes the game seem even more like Ratchet and Clank.

The plat forming parts are not done well.  It is hard to judge where you are and whether you need to do a double jump or a regular jump to land on a platform.  Sometimes when you press the jump he doesn’t even jump.  You end up just walking off the edge of a cliff.  It can get frustrating at times.  You also are able to scale walls and ceilings provided they have chicken wire or nails.

Rango only has one gun that he is able to upgrade with the power of sheriff stars.  These stars come out of downed enemies and busted up crates.   You then spend the stars at a shop that is located randomly through a level.  You can buy upgrades for Rango like more health.  You are also able to buy upgrades for your gun and melee combat moves.

You will also be grinding on rails with your boots to get to new areas.  There are levels where you will be riding on your road runner chasing after a train or Bad Bill.  At that point you will be able to control the road runner and have a gun reticule that you can then use to shoot pursuing enemies.  He also rides a bat for some other chase levels.  These chase sections are definitely needed to help break up the combat sections of a level.

You will also find yourself in walls of a guy’s camper that you are trying to escape from.  These are presented in a way that makes the game into a side scrolling beat’em up.  The camera changes the view from behind you to the side of you.  There are a couple of other times that this happens, and these sections were great.  They needed more of these kinds of sections in the game. 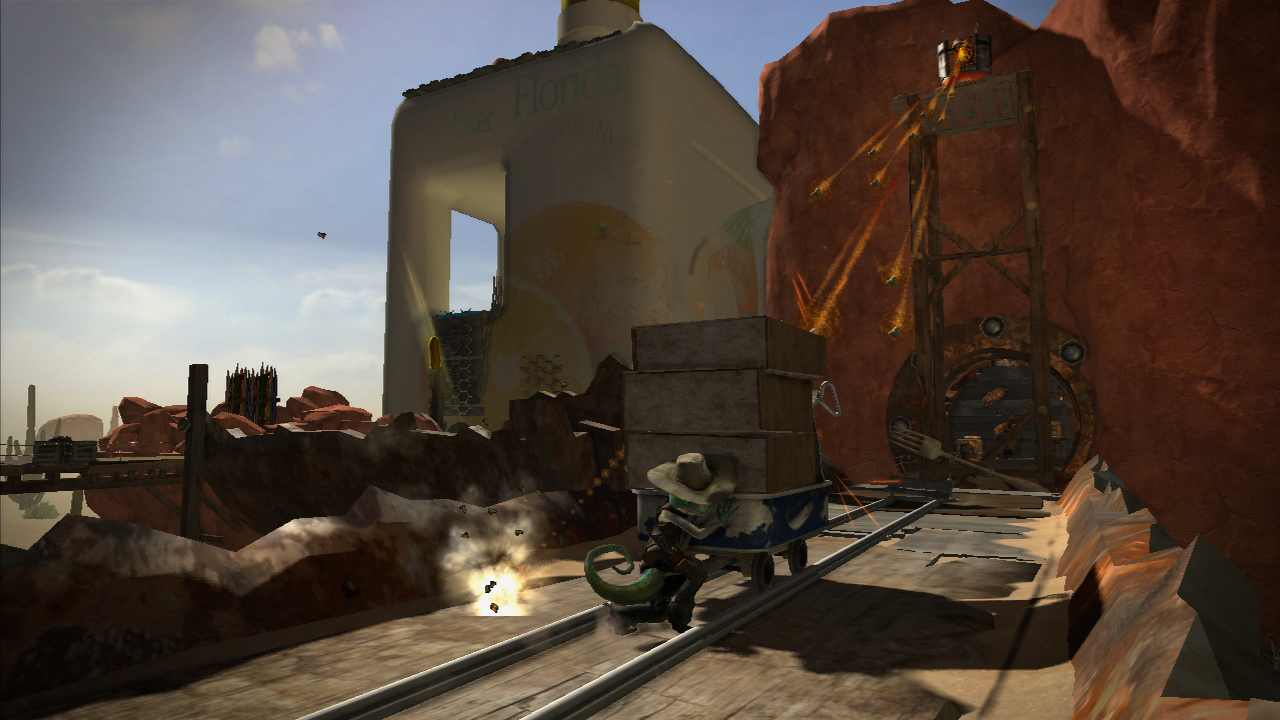 Rango is a weird looking game.  From the townspeople that are made up of different animals like a chicken and rats.  One chicken even has an arrow through his eye and he is still alive.  The world is made up of mostly real objects like paper cups and thumb tacks.  There is almost a steam punk look to some of the items, such as Rango’s gun.  Just when you start to get bored of the art style and the fact that everything looks just like the level before it, the developers throw you for a loop with the last two levels.

The second to that last level of the game took me by surprise when I was playing it.  Rango finds himself in an old arcade cabinet.  This changes the games look and art style.  He is in a bright and shiny world with bright and shiny textures to run around on.  It takes you into a matrix like level.  It then puts all of the enemies into block form kind of like 3D Dot Game Heroes.  It is such a dramatic change and it catches you off guard that you are amazed by it.  Even the last level that takes place in outer space looks good.  The developers really worked hard on the last two levels and it shows.

In the end Rango is shockingly a better than normal kids movie game.  If you like Ratchet and Clank and have a couple of hours then this game will help with the anticipation of a new Ratchet and Clank game.  This game can be enjoyed by all.  It is one of the better movie based games that has come out recently.  It is hard to say you should play this game to see the second to last level but that level does look great.  But it doesn’t make up for the other short comings that the game has.