Razer specializes in hardware for the gamer, ranging from mice to keyboards to even audio. Within their audio line, there are many choices, so how do you know which would be the best, the ultimate, the most-value-for-your-money for your gaming rig? After all, you put in time and money into your rig, and you want a headset to match.

You scroll down, looking at all the choices, and then you see it.  The Razer Megalodon, Razer's top of the line gaming headset.  Is it worth it? 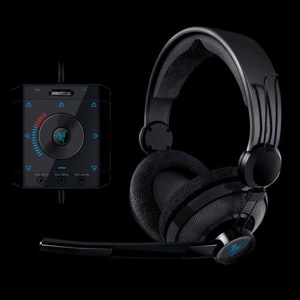 The Razer Megalodon is billed as an elite gaming headset, and there it does not disappoint; the headset features onboard audio processing and can support 5.1 and 7.1 virtual surround sound using an internal sound card, providing for amazing sound quality through the headphone portion of the set. This is great especially if you have not upgraded your audio card yet or simply want to offload the processing work to something external. If the particular application (game or video) does not have a 5.1 or 7.1 audio channel, the headset defaults into 2.1 stereo mode, but you can also switch settings via the audio processing unit or your media player / game if desired. The audio processing unit sits about two feet away from the headset, so it is easy to place on a desktop or on your computer tower where it is readily accessible.

The Megalodon is a circumaural headset, meaning that instead of the pads for the headphones sitting on or in the ear, it fits around the ears and has plenty of foam padding (close to an inch thick around the rim of the padding) to ensure a good fit. Additional pads can be ordered through Razer's website, and even though the headset looks heavy, it feels light on the head and ears, which makes wearing it for a long time quite bearable. This can be comfortable for many people but not all; if your preference is for the other styles of headphones, Razer has a variety of other gaming headsets at various price points for you to try out - for example, the earbud-style Moray+ headset can also be used with a laptop, smartphone, or various portable consoles.

Speaking of price, the Megalodon sits at a moderately expensive 149.99 price point. One may think that grabbing a Logitech headset would be cheaper – the closest computer headset competitor that I could find is the Logitech G35 wireless headset, which also features virtual surround sound. It's true that the Logitech would be cheaper, and that price is indeed a concern with the Megalodon.

However, the Logitech features controls on the side of the headset, sitting on one of the pads that rest over the ears, which may be too inconvenient.  On the Razer Megalodon, the controls sit on the audio processing unit, so you can easily reach by your side or wherever you place the unit to grab at the controls, instead of remembering which buttons are where on your ear. But the Razer Megalodon is not just competing with other computer accessory manufacturers; it is also competing with audio accessory manufacturers, people who immerse themselves into sound like it is an Olympic swimming pool, so keep in mind the intended competition for the Megalodon may be different than you think.

Good: The Megalodon features 7.1 / 5.1 virtual surround sound, is USB powered, works easily, has a comfortable fit around the ears.

Bad: Price point is a bit high. Circumaural headsets may not be for everyone.

Overall, if USB circumaural headsets are your thing, the Megalodon is a worthy investment.