I was there from the beginning with the Red Faction series when it premiered on the Playstation 2.  That first game was released a decade ago, and had the then-revolutionary feature of “Geo-mod” technology, which is fancy talk for being able to distort the environment when you used explosives.  In the first game, this was used far too sparingly, with only a few areas where players had the means, and motivation to blast their way through large sections of the terrain.  However, when the second Red Faction came out, it had significantly more opportunities to blow holes through things that got in your way.  Not so long ago, the series took this to the extreme with Red Faction Guerrilla where pretty much anything standing could be knocked down.  Now, the franchise is back with the ultimate incarnation of this gameplay premise: Red Faction Armageddon, a game where blowing up everything you see is just the start of the fun. 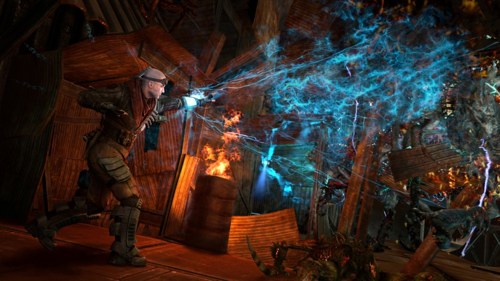 Armageddon doesn’t just let you destroy things, you also have the ability to Repair stuff as well.  Your character has an alien device, which provides several useful functions.  One is the repair tool or “Nano Forge”, which will let you reconstruct anything you previously blew up.  This can be done for the fun of re-blowing up things a second time, however it can also be used to reconstruct useful areas, after you wrecked them taking out enemies.  Because Armageddon has a cover system, the Nano Forge can also be used to create cover when you’re caught in the open and suddenly under fire. There’s a kitchen sink approach to the nano tool, as it also gives you a  few other powers as well, including a sort of telekinetic push.

Of course it wouldn’t be any fun at all rebuilding things, unless you had the capacity to destroy stuff on a massive scale.  In Armageddon, you have a very powerful arsenal of weapons, and destruction will be waged on a scale generally not seen in other first person shooters.  You get weapons like the Plasma Beam which will let you cut through buildings like they’re tomatoes, and other weapons can fire balls of energy that will punch a hole through just about anything on the map- then keep on going until it has smashed holes through a couple of other things too.  Much like an 88 magnum, "It shoots through schools". 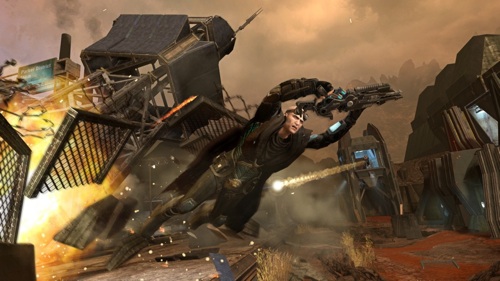 During a demo at the Penny Arcade Expo East, I got to try a sandbox mode in which I could run around blowing things up in a sort of challenge stage where I was scored for how much destruction I could manage within a set period of time.  This was a chance to try out the heavier weapons like the Plasma Beam which let me quickly slice through the bottoms of tall buildings.  Doing so would cause the entire structure to collapse, granting me a high score for a quick shot.  It’s very easy to imagine how that sort of tactic would work on snipers in a the campaign mode.

Also handy in this sort of rampant destruction was the game’s Magnet Gun which allowed me to shoot a magnetic charge at one building (Say a huge tank of fuel), then shoot a second magnet at another building (Such as the supports under a bridge), and the two magnets would pull the tank of fuel right into the bridge, as though the tank weighed nothing.  Needless to say, if an enemy had been standing between the two buildings, they would have been crushed, and clever players will be able to find all sorts of innovative ways to use this. 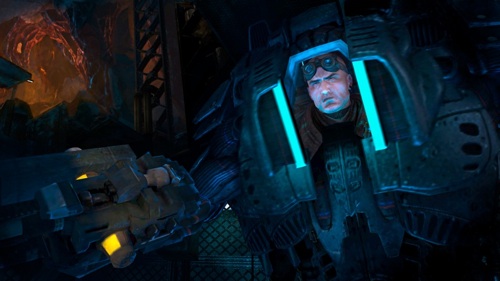 Also available for a test drive was the LEO Exo-suit, a ten-foot tall set of powered robot armor.  It comes with its own set of firepower, including a machine gun and rockets, but the most fun was the charging punch ability that I could use to plow through walls.  The exo-suit couldn’t use the weapons I carried as a human, and frankly didn’t have the same sort of destructive potential as the magnet gun, for example.  However the Red Faction series has always used vehicles to good effect, and I’m sure that the game will make good use of this mech.

Aside from the sandbox mode I tried, Red Faction Armageddon has a single-player campaign, as well as the trendy new “Fight off the endless horde” mode.  It comes out May 31st For PC, XBox and Playstation.