By: | PC Features | March 7, 2011
I'm just going to come out and say it: Blowing stuff up is fun. Call me shallow, but there's nothing quite like seeing a nice big fireball where a building, vehicle, or enemy previously stood. That being said, 2009's Red Faction: Guerilla was a fairly standard third person shooter made special by its penchant for destruction on a grand scale, and a completely destructible environment. Sure, games like Battlefield: Bad Company had done it before Guerilla, but Guerilla made your very objective to blow things up. Now, THQ is releasing a direct sequel to Guerilla called Red Faction: Armageddon, which replaces the oppressive Earth Defense Force for aliens which have been unleashed from so much digging under Mars' crust.


Red Faction: Armageddon takes place during the time of Darius Mason, the grandson of Alex Mason. Martian civilization is facing another threat, though now it's Martian aliens which are less than friendly, to say the least. Your objective throughout the game will be to lead the surviving colonists through the underground tunnels and into safety. 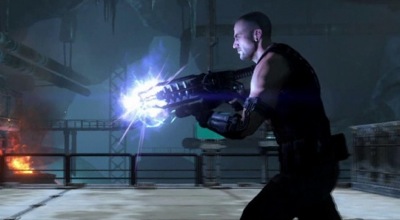 The way that Armageddon will tie Guerilla's map control campaign gameplay into this story is quite interesting. Rather than trying to take over Mars, as Darius you'll be trying to forge a path through the tunnels to safety. Of course, this path isn't clear, you'l have to blow up, collapse, and destroy natural obstacles in your path. So while you're blazing across the map, there will also be the infestation (in the form of a red vine) seeping the strength of certain structures away. So like Guerilla and the military, you'll want to take out the infestation structures in order to keep the strength of your enemies down.
Speaking of the enemies, there have only been two enemies shown so far; the Creeper and the Ravager. The Creeper is essentially the acid antlion worker from Half-Life 2: Episode 2, a crawling spider which can shoot acid at long range, but can be taken down with a few shots. En mass, though, they look like they'll be hard to deal with. The Ravager, however, walks on two legs and has a habit of leaping out of dark corners and holes above you. These enemies can absorb far more damage from your weapons.
The weapons in  Armageddon are definitely a bit more far out than your average shooter, seeing as your goal is to create as much destruction as possible. Some of the new highlights play with the physics angle of Armageddon, like a magnet gun that brings two objects together with violent force, and a singularity gun that creates miniature black holes which suck objects in, and then flings those objects outward to destroy nearly anything in the area. You've also got a plasma cutter, which simply cuts objects up like a hot knife through butter. Of course, there's more conventional weapons such as the assault rifle. If you don't want to destroy stuff, or need to repair a story-critical building, you can use the nano forge, which rebuilds objects. 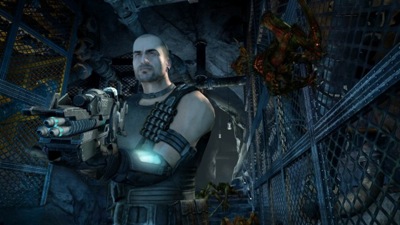 Red Faction: Armageddon isn't revolutionizing the Red Faction formula at this point, but it definitely seems to be taking it in a more streamlined direction, from the linear campaign progression, to the varied weapons and enemies. If you liked Guerilla, this certainly looks like it fits the bill. Red Faction: Armageddon comes out for PC, XBox and PS3 on May 31st