Red Hood and the Outlaws #14 – Review: An Advertisement for Lobdell’s Superman 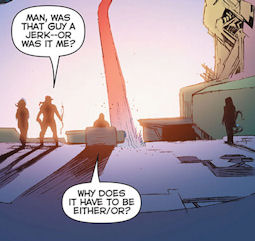 It’s a transitional issue of Red Hood and the Outlaws that seems to be advertising other books to readers rather than building up toward anything of its own. Superman shows up to, I guess, let readers know that the creative team is taking over his book. And then, we get a lead in to Death of the Family, which is going on in all the rest of the Bat-titles. So what does that leave for Red Hood and the Outlaws? Not a whole lot.

The issue begins with Superman intercepting the group on their way back to Earth via Starfire’s starship. I’m not all that clear on how he manages this, though. It reads like he meets them just as they are entering the solar system. What are we saying here? That Superman’s senses are so great that he instantly knows when something gets close to Pluto? That’s just a bit ridiculous. It would have been easier, though still ridiculous, to accept Superman noticing it when Starfire returned back to Earth since he had been searching for her. Still, no explanation is given. It’s also not given later when they give him the slip and he immediately finds them again. Red Hood’s internal narration chalks it up to Superman being Superman, which is pretty weak.

Look. If this is the loose way Scott Lobdell likes to write Superman, then I am far more comfortable in my decision not to read that series.

Anyway, the reason for Superman’s appearance has to do with a plot I assume has been happening in his own book with Helspont. Superman is investigating whether Helspont has had contact with other aliens on Earth, leading him to Starfire. This makes quite a bit of sense, and I appreciate that about it. This is a logical progression of whatever happened in that Superman story with Helspont. That said, it also amounts to a whole lot of nothing for us the readers. Starfire has nothing of any real substance to say about Helspont, and Superman moves on. Half of the issue just for that.

What pads out Superman’s appearance is a weak sequence where Red Hood and the others actually try to fight him. Granted, it’s instigated by Starfire with her temper problems, but that doesn’t make it any better. It’s like one of those dumb fights between superheroes over some misunderstanding we used to get all of the time. Except in this case, there is no misunderstanding. It’s just dumb.

The worst thing about it all is where we have Superman acknowledging how he’s morally opposed to the three of them but isn’t going to do anything about it. Really? He leaves them alone just because Batman vouched for them? Wait, Batman did what? Right. Convenient.

We move from this advertisement to Lobdell’s Superman series right into Death of the Family as Red Hood takes his date Isabel home to Gotham City. That’s right. The flight attendant Jason randomly decided to try dating happens to be a resident of Gotham City. That sure is convenient too.

What happens next is reminiscent of the Superman thing, because it makes no sense in a very similar way. The Joker, somehow, strikes as Jason through Isabel. ...How? Seriously, how? This whole space adventure was their first date. There is no previous relationship. How the hell is the Joker waiting for them at her apartment? There is no believable way that Joker could be tracking Jason this closely. Nor can I accept that Joker is just there by coincidence when the spaceship comes by to drop them off. It’s like him someone showing up on Starfire’s island at the end of last issue.

And given that I doubt this is the last we will see of Isabel, that means there is nothing redeemable about it.

Honestly, the only good thing about this issue is some of the dialogue. Even what what is happening is weak and unbelievable, Lobdell manages to keep the characters generally bouncing off one another in interesting and entertaining ways. This has actually been one of the defining traits of the series so far. It’s a good cast, and Lobdell plays them together well even under the lamest of circumstances.

This issue of Red Hood and the Outlaws is a victim of lazy writing. Every indication here suggests that Superman’s appearance and the tie-in to Death of the Family was thrown together at the last minute with little thought put into it. It’s an issue struggling to hold itself together on just a superficial level, and that is a real shame. Superman’s shoe-horned role cheats us from having a far more relevant scene of Starfire saying goodbye to her former crew. And the sloppy rush toward Death of the Family cheats us from having... well... a good lead in to the Joker’s return.

At this point, I would probably run screaming from this book if I didn’t like its characters so much.