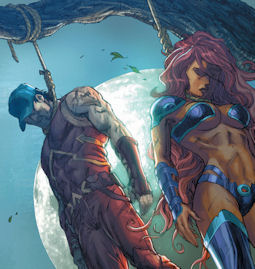 This Requiem-labelled issue of Red Hood and the Outlaws has far less to do with Damian Wayne’s death than it does the Death of the Family. Actually, that’s an understatement. This has nothing whatsoever to do with the death of Damian. It is purely an aftermath issue for Death of the Family, and one that deals only with Jason Todd and Bruce Wayne.

More importantly, it’s an emotionally strong story that leaves me feeling very conflicted. On one hand. it succeeds at hitting the right emotional beats between these two characters. On the other hand, it takes Jason in a direction that is quite possibly the worst possible direction he could go.

We pick up with Jason recovering from the acid attack Joker left as a final surprise for him. I won’t go into too much detail about this plot point. Basically, Scott Lobdell’s tie-ins for Death of the Family were the worst, featuring the Joker constantly pulling off these ridiculous and completely unbelievable stunts. The elaborate acid prank with Red Hood’s helmet was just one more of these. You’d think Jason was familiar enough with his own helmet to notice if a complex holographic and acid delivery system was put inside it. Buy hey, it was a comic book. A bad one.

So Jason is recovering from whatever this acid attack did to him. I say whatever, because it’s not exactly clear what happened. We don’t actually get to see Jason’s face, but Alfred claims there’s no long-term damage but also that he's been badly burned. I'm not sure how those two things go together, but I'm not a doctor. As Alfred points out, neither is he. I assume it’s a mix of poisoning from the acid fumes and pain medication that has put him down. The effect is that Jason is reflecting on things in a dream state while Bruce and Alfred watch over him.

Without question, Jason’s dreams are the weaker half of the story. They are just overdramatic and far less interesting than what’s going on in the real world. Even worse, they quickly descend into All-Caste territory as Ducra shows up and Jason manifests -- of all things -- something called the All-Blade. My god. My biggest hope for James Tynion’s upcoming run on this book is that he dumps all this All-Caste nonsense and doesn’t look back. The DC Universe does not need yet another quasi-mystical secret society, and Jason Todd surely did not need to become the recipient of its uninteresting baggage. It’s such a shame Lobdell had drag down what should be such a good Jason and Bruce-centric story by going off on this All-Caste tangent for nearly half of the issue. This isn't the first time it's happened to an issue of the series either. 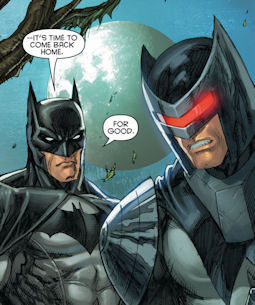 Thankfully, Bruce’s vigil at Jason’s bedside provides much better material to read. It’s even a little frustrating how good it is. Usually, Lobdell gives us some great stuff when he focuses down on character interactions and keeps Jason in his home environment of Gotham City. It’s when he goes off on this wild plot tangents that the stories suffer, and Red Hood and the Outlaws has spent most of its time doing that. This is more like what I’ve always wanted from a Red Hood series. I don’t want to see Jason  fighting in space battles. I don’t want to see him saving the world from demons. I want to see him with other characters almost as emotionally damaged as himself, and I want to see him with other Bat-characters.

We even get a flashback to Batman recruiting Jason into Batman, Incorporated as Wingman, fixing something Grant Morrison glossed over. I know, I know. Blasphemy. Saying Lobdell fixed something Morrison did. But look, Morrison has never done a great job with Jason, and he certainly never bothered to justify Jason being Wingman. So it’s nice to see Lobdell try to address it here, tying it in nicely to the story.

However, there is one major problem with this, and that lies in taking Jason Todd to the one place he really should never go.

It’s almost never a good idea to fix a character’s flaws. Those flaws are what makes them unique and interesting. I mean, I wouldn’t want to see Batman get over his parents’ deaths. I wouldn’t want to see Iron Man learn humility or Punisher decide lethal punishment is wrong. So by that same token, I don’t care to see Jason find redemption and forgiveness. His black sheep status among the Bat-family is the character’s hook. That’s what’s interesting about him. He’s the fallen Robin. Take that away from him, and he just becomes another Nightwing. Nightwing-lite is a horrible role. Just ask Tim Drake, who already has it.

Basically, Jason Todd being welcomed back into the Bat-family with open arms is perhaps the most destructive thing that can be done to the character. So as nicely done as it is to read in this issue, it’s still a bad way to go long-term.

Can I just say the cover is awesome? Because it really is awesome. Tyler Kirkham's interior art is good as well. He really sells the Joker's literal face mask well. He even does the quite moments with Bruce watching over Jason well too, which I wouldn't have expected from an artist I did to identify more with overly muscled characters and action scenes.

Lobdell gets the emotion right in this Death of the Family aftermath. Also, the small assurance that Jason's injury isn't meant to be permanent is a relief, because having the Joker scar him like that permanently would just have been lame and unnecessary. But hopefully, either Lobdell or Tynion will veer the character off this path of getting along with the Bat-family soon, because that only leads toward making Jason a boring and redundant character in the DC Universe. This nice character moment for Jason and Bruce is also undermined by Lobdell's insistance to insert more plot elements from the All-Caste, something that never has and never will work as part of Jason Todd's character. Please, give it up.