By: | Comic Reviews | November 6, 2011
After the mediocrity of Red Lanterns #2, I wasn't certain if I would bother looking at Red Lanterns #3. I want very much to like this book. The art by Ed Benes and Rob Hunter is terrific and the writer, Peter Milligan, is also currently working on Justice League Dark, which I'm a huge fan of. Unfortunately, this issue is, once again, so humorless that I can't help laughing at it.

So, surprise, surprise, the issue begins with Atrocitus, "leader" of the Red Lanterns, having already chosen Morrigan Aensland cosplayer Bleez to be the one other bright Lantern. Towards this end, he has thrown her into a big pool of blood to make her smart. Obviously. Upon finishing her crimson baptism, Bleez gets all pouty, says she doesn't want to work, and Atrocitus shows her a home-movie-projection-hologram-I-have-no-idea that retcons her origin story. Of course, this leads to blood shed. In the end, the take away from all this is that Bleez is a lot more clever than she seemed and may have even manipulated Atrocitus to begin with. 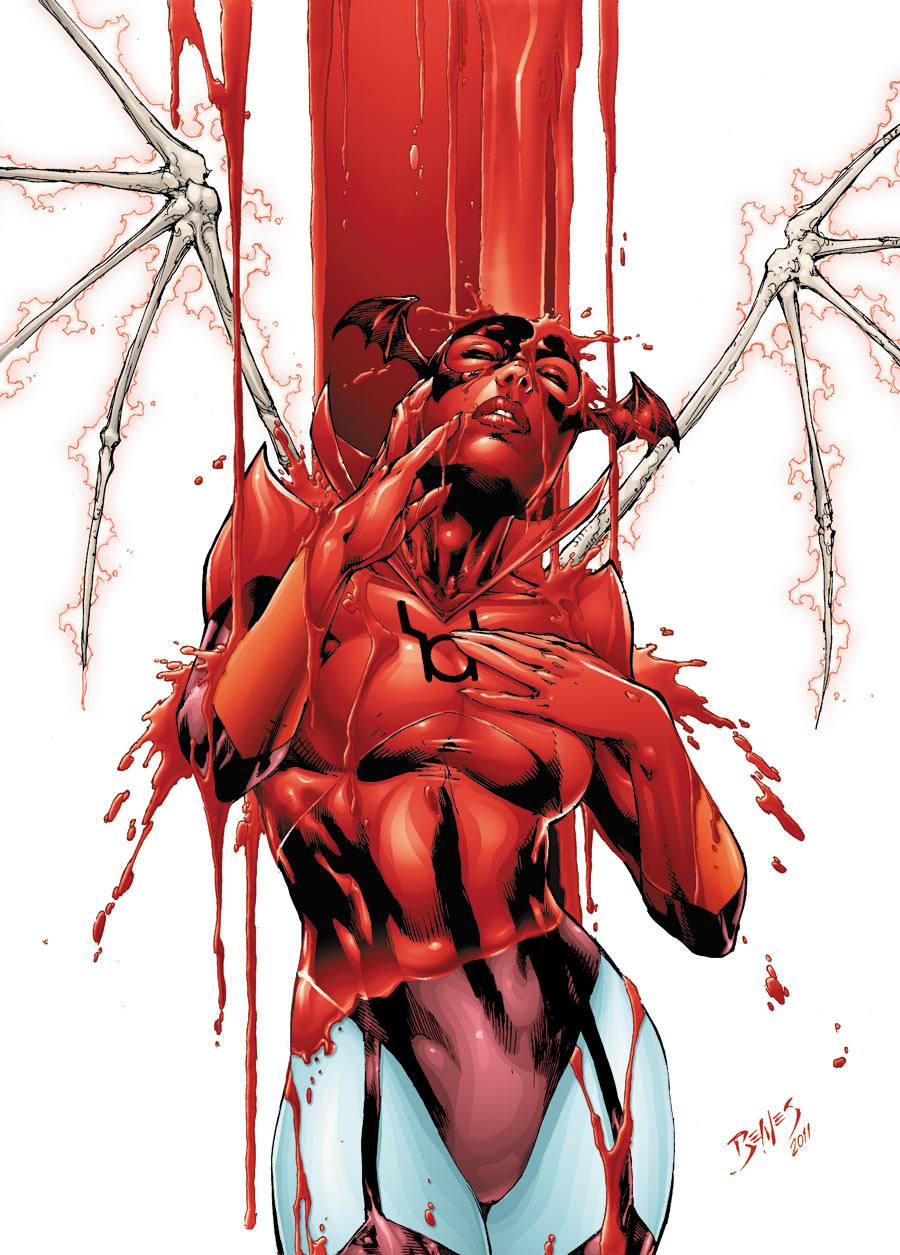 It's very obvious that the powers that be want this girl to be a much bigger character. Honestly, it even makes sense that there should be some supporting cast for Atrocitus. Being lonely and roaming the stars is Silver Surfer's deal. I'm just wondering if "pissed off hot chick" is really the best choice. We have seen her before. My favorite thing about Red Lanterns is just how silly the whole thing is. Up until now our cast has been a big pink guy who is incredibly angry, a murderous and cosmically-powered house cat, and a mass of freakish fighting monsters. This is the makings of my favorite sitcom of all time. Now, it seems like someone is really pushing for this to be a comic book. And, most disappointingly, a generic comic book.

The only other thing going on here is a quick and completely unwarranted trip to Earth. There are these two brothers who recently lost their generic paternal figure who we never met. One brother is pissed off and violent, while the other brother is pissed off, but apparently not wanting to burn down houses makes him a coward. These guys showed up in the previous issue as well. At the time, I thought it was just a non sequitur to show an example of rage in the universe, because Atrocitus was all, "Grr, argh, I will be justice and stuff, growl." Apparently these brothers are important enough to come back again, which means that they will probably have some involvement in whatever story line this series eventually gets around to having. Except they don't belong here. That story has not started yet and writing a comic that goes "Bleez, Bleez, Bleez, some Earth guys, Bleez, Bleez" is really more of an annoyance than anything. Just wait until those guys have a use and then we can hear about how bummed out they are. I'm sure it will be riveting.

Anyways, bottom line, Red Lanterns #3 is okay. Not great. Not as awful as I probably made it out to be. Like I said, the art is great and that leads to some cool violence. One page has Dex-Starr snuggled in Atrocitus's arms, which is nearly worth the asking price. Of course, one panel down, we're left on a huge close up of Bleez's bum. I feel like that, more than anything, tells us exactly where this comic is going.
Rating
5.0