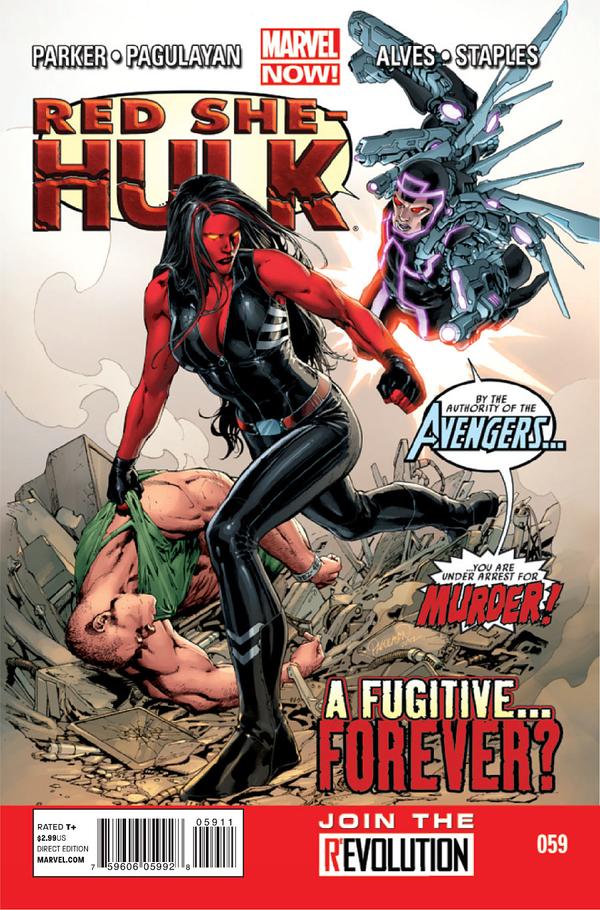 I have always been a fan of Red She Hulk. So, I was pretty excited to see the Hulk series turn into the Red She Hulk series for Marvel Now. I read the first issue and wasn’t that impressed, but still saw the potential for the series.

The cover for this issue has a pretty good concept. It explains exactly what happens. I like the art for the cover it is the same art style they used for the Hulk series previously, which I thought fit the Hulk family well.

Red She Hulk has to deal with consequences of attacking a military base. The Avengers go after her for the murders of the government officials she killed last issue.

I thought this issue was an improvement from last. The first issue didn’t interest me, but this story kept my interest. The Avengers may be the only people that will be able to capture Red She Hulk and talk to her. Red She Hulk is not wrong in this situation, she just took matters into her own hands and handled the situation the wrong way. So, it should be interesting to see what happens once Red She Hulk and the Avengers actually talk things out. Who knows if the Avengers would actually hear her out anyways.

Even though this was better than the last issue I still think this series is lacking. The best way to approach a Red She Hulk series is not by jumping into a new story arc, but to actually learn what her character is all about and exactly what is going on her brain. Betty has been Red She Hulk for about two years now, but we can never predict what she is going to do next. I think that is because writers never really explore what she is thinking. We never had a solo series with Red She Hulk that would give us the opportunity to learn more about the character's motives.

People sometimes forget how much Betty has changed in such a short amount of time. Maybe we should see exactly what has changed and if there may be a little of the old Betty left. Will we ever see this character develop into a likeable character that has rational reasoning to her actions?

Hopefully in the next couple of issues or next story we get to explore Betty’s character not as just an angry She Hulk, but as a person as well. The issue will keep you interested enough for you to want to pick it up. But how long can they avoid this character from developing?