By: Justin Moody | Comic Reviews | May 24, 2010
Rescue is another in a series of one-shots starring the Women of the Marvel Universe. Rescue, for those not following Iron Man, is the name of Pepper Potts' armor. Since the armor has no weapons and was made for search and rescue, it became the obvious choice in names. This is humorous, since this entire issue deals with choice.

The events of the book take place during Stark: Disassembled, in which Tony is in a coma forcing Pepper to wait for his return. She does what she does best and organizes someone else's mess by cleaning a locker room. What she doesn't count on is help from her dead husband, Happy, as she finds a boxing glove. No Happy is not back from the dead, but that doesn't stop her from holding a conversation with him. She walks Happy through an event that happened to her on her way to saving Tony. 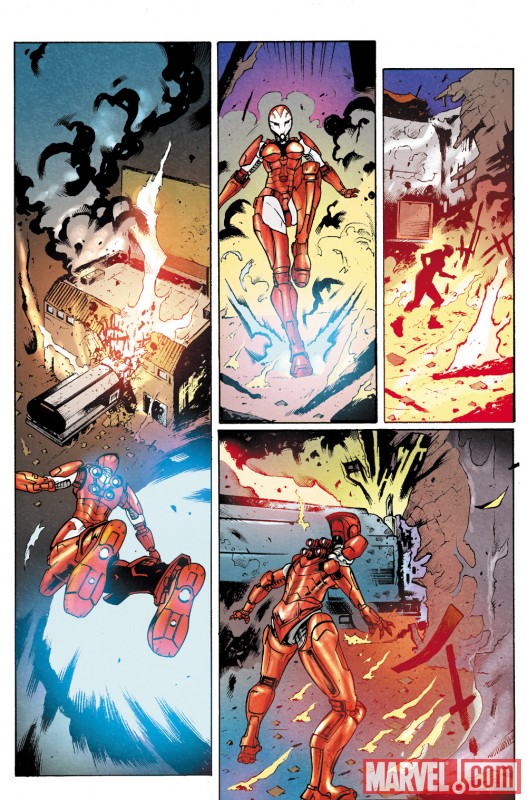 Some foolish young girl was joy riding in a car and hanging from the window. Apparently she didn't see the semi-truck barreling towards her. The semi-truck driver can't respond fast enough to avoid killing the young girl. Pepper makes a quick decision and lifts the car up and out of the way. Problem is she's not fast enough to stop the semi that is already trying to react. The truck delivering gas crashes into a grocery store setting it on fire. Pepper can't catch up to the situation fast enough. Every person she saves forces her to make another hard decision, but she keeps moving forward. Pepper is working against a countdown clock. She has to save everyone before H.A.M.M.E.R. shows up to arrest her, adding extra pressure to the situation.

She continues to talk to Happy, walking him through everything and in a way working through it all herself. Happy coaches her on boxing and uses the coaching as a metaphor to guide her decisions. In the end Pepper questions whether saving that girls life and risking all the others was the right choice. Happy gives her a scenario in which the girl grows up to have a happy family and a child the makes it into the White House.

The most surprising thing about this story is that Tony Stark, although mentioned, is never shown. This is Pepper's story from beginning to end and she holds her own. Kelly Sue Deconnick (Sif) turns Pepper Potts from supporting character into starring character. What is really great about her writing is that Pepper doesn't act like a man in a female's body, which is typical in comics. Pepper is 100% woman and it makes for a unique read.

Deconnick also succeeds in making Pepper imperfect. Just because she has Iron Man armor doesn't make her Tony Stark. Deconnick is able to show that Pepper is a rookie at the "hero game" and doesn't have all the answers. This is a new twist for this character and it moves her into unfamiliar waters, but that's a good thing in Peppers case.

The art for the book is not beautiful. In fact it's a rough switch from Salvador Larroca's art on the Iron Man series, but something about it works for this story. Andrea Mutti (G.I. Joe Origins) struggles with Rescue's armor. The proportions of the suit are all over the place. The neck and head especially change size and length depending on the page. Pepper herself looks like a she's in her mid twenties rather than the forty year old woman she is. This would be less noticeable if Happy didn't look twice her age. What's weird about that is the fact that he's dead and seems to have aged since then. Mutti does draw a very action intense book and manages to make every panel interesting to look at. Even with the inconsistencies, she puts together a really strong issue that adds to Deconnick's story.

Sadly most readers will probably pass on this issue, thinking that it's nothing more than a gimmick. Yes, it's an Iron Man book and yes, it's highlighting women in comics. But this book stands on its own merits and should only be judged on that. That being said, this book is a great read from beginning to end and tells a story that has a lot of heart to it, making it something that should be picked up and read.

Do you think Dr. Pepper is the only drink Pepper Potts consumes? Leave a comment to say the answer and why not follow Dustin on Twitter or ask him something on FormSpring.