After three films, many within the fan community felt the “Resident Evil” film franchise, the most lucrative game to film adaptations to date, was wearing a bit thin. Sony/Screen Gems attempted to breath (new?) life into the franchise by repositioning the helmer of the first film, Paul W.S. Anderson, in directorial control of the fourth film, subtitled “Afterlife.” Then, Anderson used the fusion camera system that made the 3-D release of James Cameron's Avatar such a success, but did it pay off?

Yes and no. “Afterlife” started with a great sense of potential in terms of style and action, but much of what is gained in the opening 15 minutes is quickly lost when Alice (Milla Jovovich) makes her way to a desolate Western coastline and is not regained until the third act of the film. 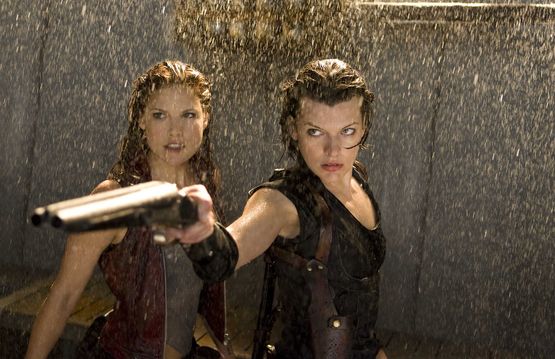 Taking place a number of years after the original outbreak in Resident Evil, “Afterlife” chronicles Alice's continuing battle against the Umbrella Corporation, the organization responsible for the viral outbreak that swept the Earth. Opening in Tokyo, Alice discovers the underground facility where much of Umbrella's top executives, including Chairman Albert Wesker (Shawn Roberts), have taken refuge from the outbreak while continuing their research and experiments with the T-virus.

When her attempt to assassinate Wesker goes wrong, Alice retreats back to North America in an effort to rendezvous in Alaska with Claire Redfield (Ali Larter) and the survivors last seen flying away in a helicopter at the end of “Extinction.” Upon learning the apparent safe haven of Arcadia does not exist, her actions lead her to a zombie infested Los Angeles, encountering other survivors along the way, including Claire's brother, Chris (Wentworth Miller).

From the opening shots, it's very clear that “Afterlife” is a “Resident Evil” movie directed by Anderson. The opening credits in particular provide a sense of restraint and style familiar to fans of the first film, without feeling heavy-handed or forced. Regardless, things quickly get a little out of control when the action picks up.

Make no mistake that there is far more (satisfying) action in “Afterlife” than “Extinction,” though the film does not quite feel as relentless as “Apocalypse,” nor as stylized. This is in large part due to Alice's first encounter with Wesker at the start of the film, which we will not give away here. Suffice to say, it affects Alice's means of combat throughout the film.

As an action movie, “Afterlife” should definitely appease its core fanbase of gamer and action fans, despite the fact that a number of sequences feel rushed or lacking in imagination. It should be noted that the 3D is kind to the action sequences with bullets, axes and a lot of rocks flying in all directions. It doesn't exactly pop off the screen, but certainly makes for a more “rounded” picture.

Jovovich is still as badass as ever, though she's given less and less to work with as each movie goes by. The core story itself is rather weak, even by action film standards. I will dare to say that the games themselves have more effective storylines and characters. 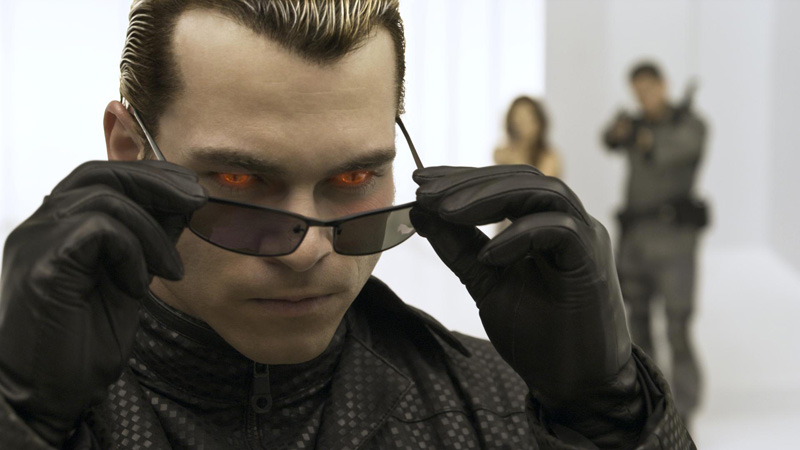 Perhaps the biggest case of weakness in this area is Wesker. In two films now he has made some form of appearance and continues to be criminally underused. The character (in the games at least) is a fantastic Machiavellian who chews up the scenery of any scene he's involved in. In “Afterlife,” despite being the “central” villain (difficult to pull off if he is never on the screen), he is given absolutely no depth, motivation or real presence within the context of “Afterlife.” As disappointing as it is to say, it's a reality that Wesker's film depictions (and his fate) fail to live up to his potential as a villain.

Ultimately, “Afterlife” does not kill the film series but does not bring it back from it's “wearing thin” status. Although the action is decent, it is not the most inventive or fulfilling. Aspects of Alice developed in the prior films are essentially thrown away and the ending may leave more than one viewer or fan perplexed and/or pissed. Regardless, “Afterlife” is enough of a breakaway from “Extinction” to warrant a go-around by fans of the series, but don't expect it to infect those not already bitten by the “Resident Evil” bug. Rating: 5/10

Resident Evil: Afterlife Written and Directed by Paul W.S. Anderson Starring: Milla Jovovich, Ali Larter Other Player Affinity Reviews Dinah thought: "Resident Evil: Afterlife contains many of the fun effects and action sequences reminiscent of “The Matrix” series. Slow motion, fast motion, wall jumping, and even 360-degree camera work all make an appearance in the brief film. “Afterlife” is forgettable to say the least; a movie that the world could’ve done without, but isn’t any worse for having received it. The main gripe is the blandness of Alice, the protagonist zombie-killer, and her incessant dialogue with herself. There is no substance to any of the character interactions, just an excuse for another slow motion fight. Resident Evil: Afterlife is forgettable filmmaking at its finest." Rating: 6/10 Simon thought: "Within the opening 20 or so minutes of Resident Evil: Afterlife, I had all but written this fourth instalment off. It seemed to be following a similar trajectory to the “Final Destination” series whereby a series of films exhibiting diminishing return crested in an unwatchable 3-D fourth instalment. Although far from a classic piece of cinema, Mila Jovovich and crew managed to drag themselves towards partial redemption by the time of the – yet again – open-ended finale. There are contrivances upon eye-rolls in “Afterlife” but there are also enough instances of dumb fun to at least make it tolerable, in some cases even enjoyable. The most cringe-inducing determent to this videogame adaptation is the interpretation of the essential “series” character Albert Wesker, who is so embarrassingly awful it makes Chris Kline’s role in Street Fighter: The Legend of Chun-Li look awe-inspiring. Though formally a fan of the series, I care little about its eventual continuance, notwithstanding the indicated trajectory of a franchise that will implode in a panned flop; a fate I do care to witness at least a little." Rating: 5/10 Player Affinity Composite Rating: 5.3/10
Rating
5.3