The lack of buzz surrounding the release of this game should have told me all I needed to know about this game.  While Survival-Horror purists turned their nose up at the concept of this game, I held out hope that it would be something new and fun.  We, as gamers and games media, are always clamoring for something new from developers and Operation Raccoon City was that new take on Resident Evil.  The game is a third person shooter with an emphasis on action.

The game is split between two modes: campaign, which features drop-in/drop-out cooperative play that supports up to four players and four vs. four competitive multiplayer.  The campaign focuses on an Umbrella special tasks group that is sent in to clean up and eliminate anything that can trace the outbreak back to the devious pharmaceutical corporation.  The campaign really plays up to fans of the series and keys around major characters in the Resident Evil world.  Ada Wong, Hunk, and Leon Kennedy are just a few of the cameo appearances featured in the game.  The competitive side of the game features the same playable Umbrella operatives pitted against a similarly outfitted special forces unit.  The usual team deathmatch is here along with several objective based games. 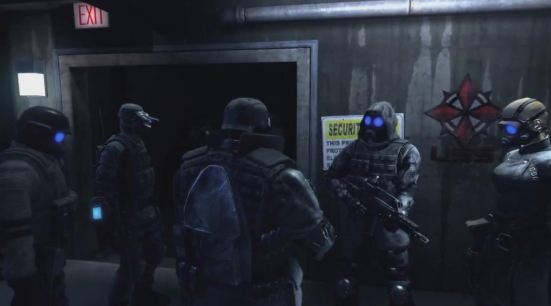 The Umbrella team chats about their Friday night plans

This all sounds like it could amount to a fun filled experience at face value, the problem comes in actually playing the game.  The mediocre story aside, the gameplay is just mediocre at best.  Operation Raccoon City suffers from several problems.  I played this game right after playing a lot of Mass Effect 3 and that made Operation Raccoon City's issues all the more glaring.  Honestly it felt like Capcom/Slant Six's measuring stick was Mass Effect 1.  As a cover based shooter, Raccoon City's sticky cover system and hit detection system feel archaic.  I found myself running up to a box, car, and other cover opportunities only to take fire and lose health while waiting for my character to actually take cover.  Headshots don't always result in kills and it often feels like you can dump an entire clip into an enemy before they actually die.  I'm not talking about hunters or lickers either.  I'm talking about humans and zombies! 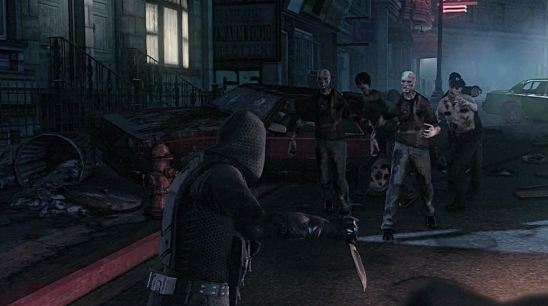 Operation Raccoon City's graphics are kind of ho-hum as well.  While the game doesn't look bad, it did not wow me.  The game, as you might expect, is dark... really dark.  The darkness of the game's levels is even more pronounced when you realize none of the guns feature a flashlight.  I mean, with a special operations team you'd think they would have tactical lights equipped to their weapons.It's not all terrible, there are some good things in the game.  In the campaign, as well as multiplayer, the option to upgrade abilities, both passive and active, is available.  Each character has two upgradable passive abilities, which remain active at all times, and the option to select one of three active abilities that have a cool-down period.  The RPG elements are nice but it's more RPG-lite scaffolding holding up this poor shooter.

If Operation Raccoon City was a twenty dollar PSN/XBLA title, its faults would be far more forgivable but this is a full sixty dollar retail game and for that price I cannot with any clear conscience recommend you buy this game, even if you're a die-hard Resident Evil fan.  From the word go, this game began to disappoint and it just got worse.  It's been a long time since I've played a game that made me want to play something, anything other than the game I was playing.  Operation Raccoon City, sadly, is one of those bad games.