The original Resident Evil: Revelations was a welcomed relief after action filled shooters like Resident Evil 6 and Resident Evil: Operation Racoon City. It was slower paced, had more puzzles and was more survival focused. It also had some new ideas like Raid Mode, a TV series style presentation and a weapon upgrade system. Revelations 2 expands on many of these ideas and for the most part succeeds.
Before we talk about the story in Resident Evil: Revelations 2 I need to explain two things:
One, the Resident Evil franchise has a strange and complex storyline. So if something sounds odd or completely crazy, don’t worry that’s one of the things people like about these games. The often dumb and cheesy story.
Two, Revelations 2 is taking the TV series presentation farther than Revelations 1 did. The game is being released in episodic format. However, unlike The Walking Dead or Wolf Among Us from Telltale Games, Capcom has a full schedule of release. We get one episode a week for the next three weeks. What this means is I won’t be able to really make a call on the quality of the overall story until all the episodes are released.
That out of the way, Resident Evil: Revelations 2 is set chronologically between Resident Evil 5 and 6. It isn’t a direct sequel to 5 or for that matter a direct sequel to Revelations 1. It is instead a separate story that references some events from the series and contains some well known characters from the Resident Evil franchise. 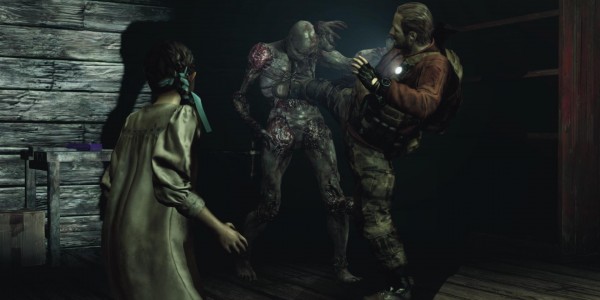 Returning characters include Claire Redfield, the sister of big shoulders himself Chris Redfield. She works for a anti Bio-terrorism group called TerraSave. With her at TerraSave is Moira Burton. They both get kidnapped and taken to a creepy island where they are trying to escape.
And yes, Moira Burton is the daughter of the one and only Barry “Where the hell have you been?” Burton. Barry Burton returns and you get to play as him as he tracks down Moira and tries to save her from creepy-zombie island. Getting kidnapped and surviving your first few hours on the island make up half of this first episode.
The other half has Barry arriving at the island and trying to figure out what the hell is going on and where his daughter is? He is helped by a young girl. Who is this young girl? I don’t know. But she has the ability to point at hidden objects, crawl into small holes and see enemies through walls. All of these abilities are useful and at nearly anytime you can switch to young Natalia and see enemy weakpoints, find hidden treasures or even open up locked chests.
Claire also has a sidekick character you can switch to. Moira will use her flashlight to find hidden objects, stun enemies with her flashlight and use her crowbar to open locked doors and chests. Both Moira and Barry’s young partner Natalia can not use guns and aren’t very effective at fighting enemies. Instead you need to use them to support you and help you solve puzzles. 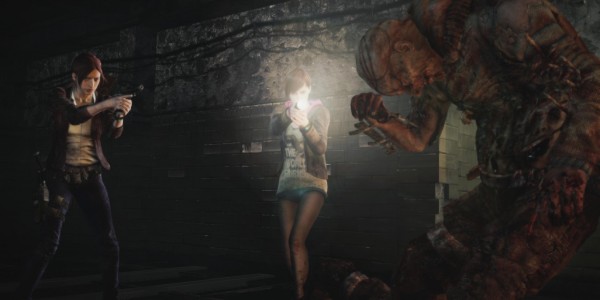 I actually really liked this idea and while I found Moira to be a bit useless at times, Natalia became highly valuable. She helped me sneak behind enemies who were hidden and kill them quietly with a stealth attack. This of course helped me conserve ammo, which is always a nice thing to do in Resident Evil.
Revelations 2 does not give you tons of ammo. I was always careful about my bullet usage and even then I found myself running low here and there against bigger enemies. The combat in Revelations 2 is faster and smoother than in previous Resident Evil games, but not as fast as say RE6. Like most post-RE4 games in the series, Revelations 2 is game all about distance, bullet conservation and enemy management.
Two enemies coming towards you: Which is closer? Who is the bigger enemy? How many bullets will it take to kill them? These are the types of questions I kept asking myself as I played the first episode. It took me two hours to play the first episode, about an hour for Claire’s part and Barry’s part took about an hour as well. And the whole time I was having fun...but I felt like I had done this before.
That’s probably the biggest issue with Revelations 2. The game feels good to play, looks nice and runs well but it doesn’t do a lot of new stuff outside of Raid Mode. The enemy design in this episode was fairly bland, which was a problem I had with the first Revelations.  And by the time I finished the first episode I was cursing one of the only new things Revelations 2 does, it’s episodic format. The last cliff hanger is hard to care about for a few reasons (That involve spoilers) and the upcoming episode looked fun. But I have to wait a week to play it. Though it is a good sign that I'm excited to play it now, I just don't see a good reason why they split the game up. 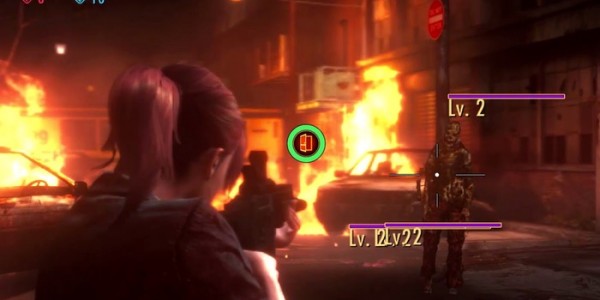 Along with the Story Mode, Resident Evil: Revelations 2 (Episode 1) comes with Raid Mode. This mode returns from the previous Revelations game and while the basic concept is still the same, it has been greatly expanded on. There are more skills to unlock, new weapons, more varied loot drops and tons of powers and effects. From ice bullets to flaming enemies and even gold covered enemies, Raid Mode ditches the more horror and creepy feel and instead feels like a fast paced and over the top arcade game.
You can upgrade weapons, unlock new characters and earn medals on levels. It almost feels like a free-to-play game in how it’s laid out. Not in a bad way. (Well there are some “hearts” you can buy to revive yourself, those feel a bit gross. But I haven’t had a need for them yet.) With daily challenges, gold to earn and tons of medals to earn, etc. It felt like it could be a separate game. In fact, I wouldn't be surprised if one day we get a free-to-play Resident Evil Raid Mode spin-off game. 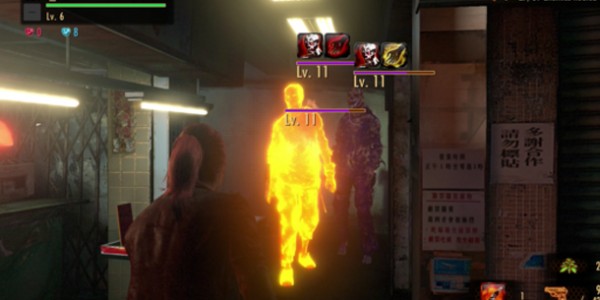 Each episode will add new enemies, levels and weapons to Raid Mode, so I’m excited to see how it expands. There is no online co-op in Raid Mode, but it seems that will be getting patched in at some point.
With this first episode Resident Evil Revelations 2 is off to an OK start. I liked the gameplay and feel of the first episode and Barry returning is great. But there wasn't much story told in this initial episode, more set up. Hopefully the next episode starts giving us some more information and characters. Raid Mode is the real standout here and will certainly be something I keep playing. Overall this first episode feels like a good foundation for something cool. Now let’s see if next week delivers a better episode.
Rating
7.7
Pros