Resogun Review: Can You Save the Last Humans?

By: Tom | PS4 Reviews | January 21, 2014
It is surprising that the Playstation 4's first killer app is a download only game, but in Resogun, Housemarque has created a new arcade classic for the modern age. With online leaderboards and extreme difficulty, Resogun's bullet hell gameplay is a must play.
Resogun is made up of five levels of increasing difficulty. The player controls an airship navigating the rounded 2D plane of a cylinder while simultaneously dodging enemy fire, rescuing humans and destroying foes. Enemies will attack from all sides and require precise movements to dodge. Each level is divided into three phases and a boss battle. To progress to the next phase, all enemies must be destroyed. At the same time, the player is tasked with saving the last humans, which isn't necessary but the rewards can be critical to completing a stage. Each of the levels have a unique boss which is challenging at first, but unfortunately once you discover how to defeat them, the difficulty dissipates. 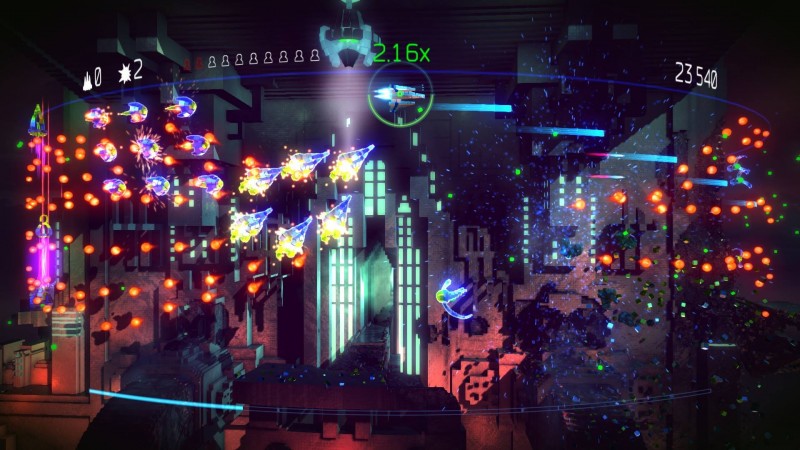 Luckily, the three ships available have a few ways to deal with the chaos. Each has a normal attack initiated with the right stick, similar to a twin stick shooter, boost allows the ship to travel fast and destroy everything in its way, bombs are limited use items that wipe out every enemy on the map, and finally overdrive which puts you into an invulnerable state with massive damage output and range. The bombs are the most powerful, but you only start with two while a third can be found by saving a particular human. Overdrive is incredibly powerful, but its meter takes a long time to fill, so I mostly kept it for emergencies. Boost, however, is the most useful ability in the game, as its gauge fills quickly and allows you to dart around the level without taking damage.
The ships themselves have unique stats and special weapon properties that get unlocked with upgrades you can find throughout each level. One ship's beam will fracture when hitting an enemy, and also has a burst shot at short range. Another unlocks a lock-on attack that lets the ship strike above and below. However, I preferred to use the standard ship that only shoots straight because often precise control over your damage was more important than killing enemies quickly. 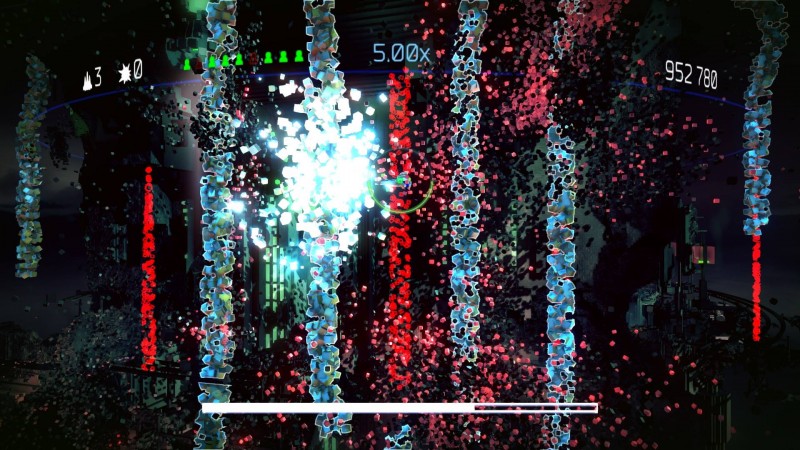 The game is divided into three modes of play. Arcade allows the player to progress naturally through all five levels while maintaining bombs and lives. You can play any unlocked level in single level mode, and compete for the highest score on each board individually. Lastly, online co-op mode connects you with a fellow ship captain to help you compete for the highest score together. Unfortunately there is no way to play cooperatively offline. There are three difficulties unlocked from the the start, with the fourth, master, being unlocked after completing the game on veteran. The range of difficulties allow for a player of any skill to get started with the game.
Like any arcade game, the goal is to get the highest score possible. You accumulate points by killing enemies, saving humans, refusing to use your bombs, and staying alive. In addition, continuously hitting enemies increases your score multiplier, which disappears if you die or if stop doing damage for even a few seconds. I found the tendency to kill every enemy as soon as they arrived on screen was actually a bad way to maintain the multiplier; instead, it is best to slowly and precisely take out your foes which makes maintaining the multiplier a unique and rewarding challenge. Online leaderboards allow you to compare your scores to friends or to the most skilled players in the world. 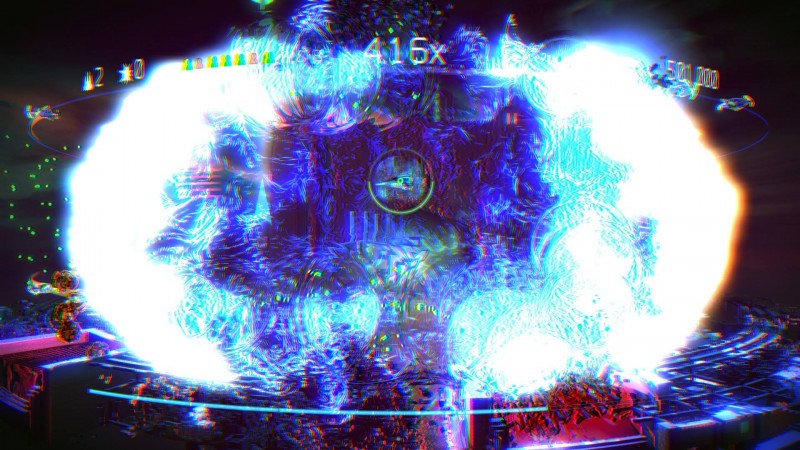 The biggest complaint I have with Resogun is the lack of variety. At present, there are only five levels to play with DLC in the works, and even though they are lengthy and culminate with a challenging boss, they don't distinguish themselves enough. Also, the enemy patterns and spawn locations are preset and not randomly generated, which allows you to fully learn a level, but makes the game less interesting in general.
Resogun looks absolutely fantastic. Each stage follows a similar aesthetic, but they manage to remain distinct and interesting visually. Enemy fire and explosions light up the world while those same explosions cause the environments to crumble into voxels. The visuals are bright and flashy and display the potential of the Playstation 4. Thankfully, Resogun's frame rate stays rock solid even when particles engulf the screen. It truly is impressive to watch. 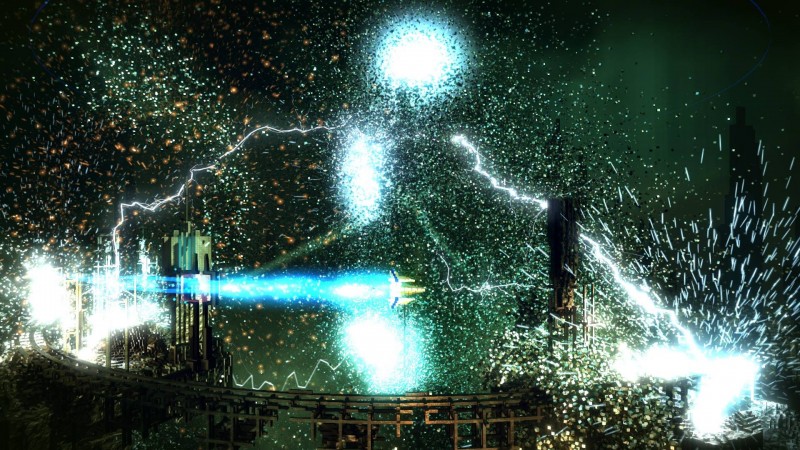 The game has a thumping sound track filled with futuristic techno music. It serves well to heighten the mood and get the blood pumping. The sounds of space combat and destruction are bombastic enough to match the spectacle of the visuals. Because of the cacophony of sound it can be hard to hear the voice-over telling you when the humans are in need of saving, so Housemarque smartly used the speaker in the DualShock 4 to deliver the most important information, keeping it distinct from the booming noises of the gameplay.
Resogun is the Playstation 4's best exclusive and an excellent reason to buy the new console, and it coming included with Playstation Plus only sweetens the deal. Robust online leaderboards will keep you competing with your friends for the high score, and the harder difficulties make the game incredibly challenging to master.
Rating
9.0
Pros