Hello and welcome to Player Affinity’s new Video Game feature, Respawn, where we will take a game released around two years ago, and give it a short write up. Describing how well it holds up, deliver it a short review, and finally say if we recommend playing through it again or not.

It doesn’t really matter your age, gender, or race; we’ve all been picked on at one time or another. Bully is a game that puts you in “that guy’s” position. That guy, the guy you always wanted to be, being kind to the Nerds, kicking the Jocks’ asses, getting all the ladies, and managing to egg a few cars along the way. The entire actual concept of Bully is an excellent one, but it’s the execution that isn’t always the most impressive thing.

The overlying story of Bully is that you’re Jimmy Hopkins, a boy sent to the roughest and toughest school of them all by your parents while they’re on their honeymoon. The interesting and exciting things take place once you actually get there. The pranks and shenanigans that go on throughout the school year really add to the “school” feel. And while I may have never lit a bag of dog shit on fire in front of the principal’s office, I can sure say I did in Bully. And the results were hilarious.

The look of Bully ranges from quite impressive to downright trash. The frame-rate is a rollercoaster. At times, mostly in stores, the game runs very smoothly, but at other times, it feels like Bully: Scholarship Edition is trying to jam nails through your eyes. The main story characters such as Jimmy, Pete, and everyone you have a mission with, all look really well done. You can tell the detail and care they put into all of them from the second you meet them. Apart from the main characters, everyone else is clearly filler content. There are around seven different character models for the students and for the adults, maybe five.

Another saddening downfall to Bully is its classes. Some of which are actually fun, but most are tedious button mashing games repeated five times before you can actually pass the class. It does get progressively more difficult as you go along which in some cases, is not a good thing. I’d rather do the same button mashing combo again and again rather than do one easy one, one medium one, and then have it progress to hard, which I found unbeatable in a lot of cases, not because I was terrible at the game, but because it was so poor at recognizing that many button combos in a roll. The actual idea of having to wake up daily, go to school, and perform well is a good one but having to repeatedly press “RT+LT, LT, RT, etc.” is the definition of poor execution. One significant improvement I think Rockstar could do to a possible Bully 2 is eliminate a time limit altogether. Some could argue that it would make it too easy, but I’d take too easy over having to battle the Xbox 360’s poor pointer controls while fighting a time limit any day. Many of the classes would be much more fun with a few slight adjustments.

A shocking stand-out in Bully is its music. It’s incredibly varied as you never really know if you’re going to get a random techno beat, or the classical Bullworth Academy theme song; both of which sound great. There doesn’t seem to be very many tracks on the Bully playlist but the ones there make you either tap your feet repeatedly, nod your head, or a little of both. Bully’s story, writing, and environment are where it holds its largest charm. There’s not a single one of Bully’s characters that isn’t hilarious and lovable in his/her own special way. Take for example Gary, at first a friend, then a foe. His incredible voice-work melts together with his witty writing to form one of the best characters in the past few years.

Bully is an open-world game and while its open-world is nothing to gawk at, looks wise, the things placed within it are enough of an incentive to enter the city countless numbers of times. I found it a little odd how much I would care about what the students around campus thought of what I was wearing and because of that, I spent tons of money on clothes…and occasionally lost tons of money by betting on midget wrestling. Apart from those, you can earn money via mowing lawns, paper routes, etc. and occasionally run into the casual greaser that “wants some of this.” Bully’s open-world is an absolute blast to just explore for hours. 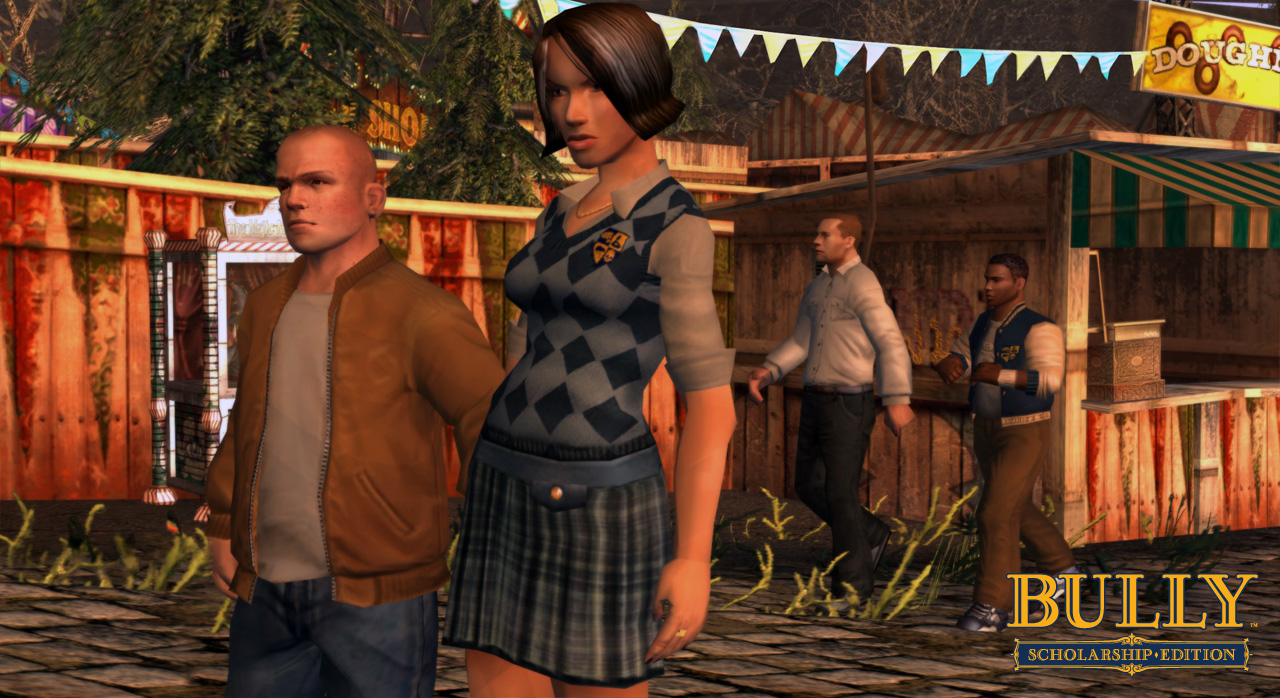 Bully Scholarship Edition fails in some ways and succeeds in many. It leaves you just dying for a sequel where they could possibly fix all the nagging issues this featured. But even if that doesn’t happen, Bully 1 is quite good, issues aside.

Does It Hold Up?

Bully still plays extremely well. Since its release, they’ve patched the many game-crashing bugs out to the point where it’s playable, and despite the abysmal frame-rate the game displays, the story and characters are fantastic and enough to keep your attention until the end. There are a few escort missions along the way and that will definitely hamper your happiness slightly, but not much.

Should You Play Through It?

If you missed it: Yes.

Replay through it: Yes.

I honestly think that this game will be able to hold itself up for many more years, based solely on the fact that the characters are so relatable. Well, until Bully 2. Please?

Special thanks to Xbox Team member, Nate Butch, for the name recommendation of "Respawn."
Rating
8.0