Clive Barker Jericho is a horror themed first person shooter—not much else to say about. There are some squad mechanics if that means anything to anyone… there is some gore, there is some more shooting… there is nothing of this game that I can justify in saying that it’s groundbreaking as this game is so mediocre… it almost seems a tad bit funny. From the famed Clive Barker, this game is a very mediocre game but it looks pretty and that’s all there is to it. The art design is impeccable, the story is interesting and disappointing, a rollercoaster ride really. The premise is very tasteful and promising—on paper, it looked rad and that’s something I took into account when I got a copy… but when I look back at such a time… the execution left a lot to be desired. Factors such as lazy level design, sub-par friendly AI, and absolutely atrocious ending of a storyline, such factors help bring this down to be one of the worse games that the Respawn feature ever had to revisit.

Lets start with the storyline… well, you are this dude and you are having bad dreams (I’m dumbing it down, it was a very average story in hindsight and you probably won’t play it) about this black kid (not kidding, the child is actually pitch black in smoke) and it bothers you. From there you go from timeline to timeline and kick ass—then shit happens and they all fall down some stairs, now they can’t chew properly. It looked fairly promising, the story starts you off as an elite group known as Jericho—you’re really holy warriors blessed with super natural powers (except for Cole who is a reality hacker… wow). I had no problems with the story what so ever—it played out like a standard shooter, except you are going through different timelines still duking it out with the same fiends on every level. Occasionally you’ll meet a boss, but it isn’t much of a shoot-em-up and you’ll likely ignore what’s around and just pummel the boss with several rounds. Done and done.

The characters are interesting and varied to play around with (if you’re lenient with the term varied). They were told to have different styles of play (which is a lie if, again, you’re lenient with the term), but playing one throughout the whole game doesn't make it intimidating to zoom into another body and play… in reality, it’s just really changing weapons from person to person, nothing more. The characters all have their own personality with them (no story significance, they’re meant to be interesting, which for some are). For example we have Black, the lesbian sniper with a trouble past and who has a crush on the second in command, Jones. Cole, the Reality Hacker (I’m having trouble taking this one in) who hates being touched (a fact they don’t elaborate on so much. Aside from having a flurry of phobias, and autism the whole fear of being touched ain’t told about). Jones is a bookworm with an assault rifle with mind reading powers… yeah, cool story bro. Delgado, a hot-headed Latino with a fire arm and a minigun (and a bloody .50 cal pistol… really?). He dates Church, the assassin and scout for the squad (who looks like she wants to go clubbing). She, in turn, has daddy issues (literally...). 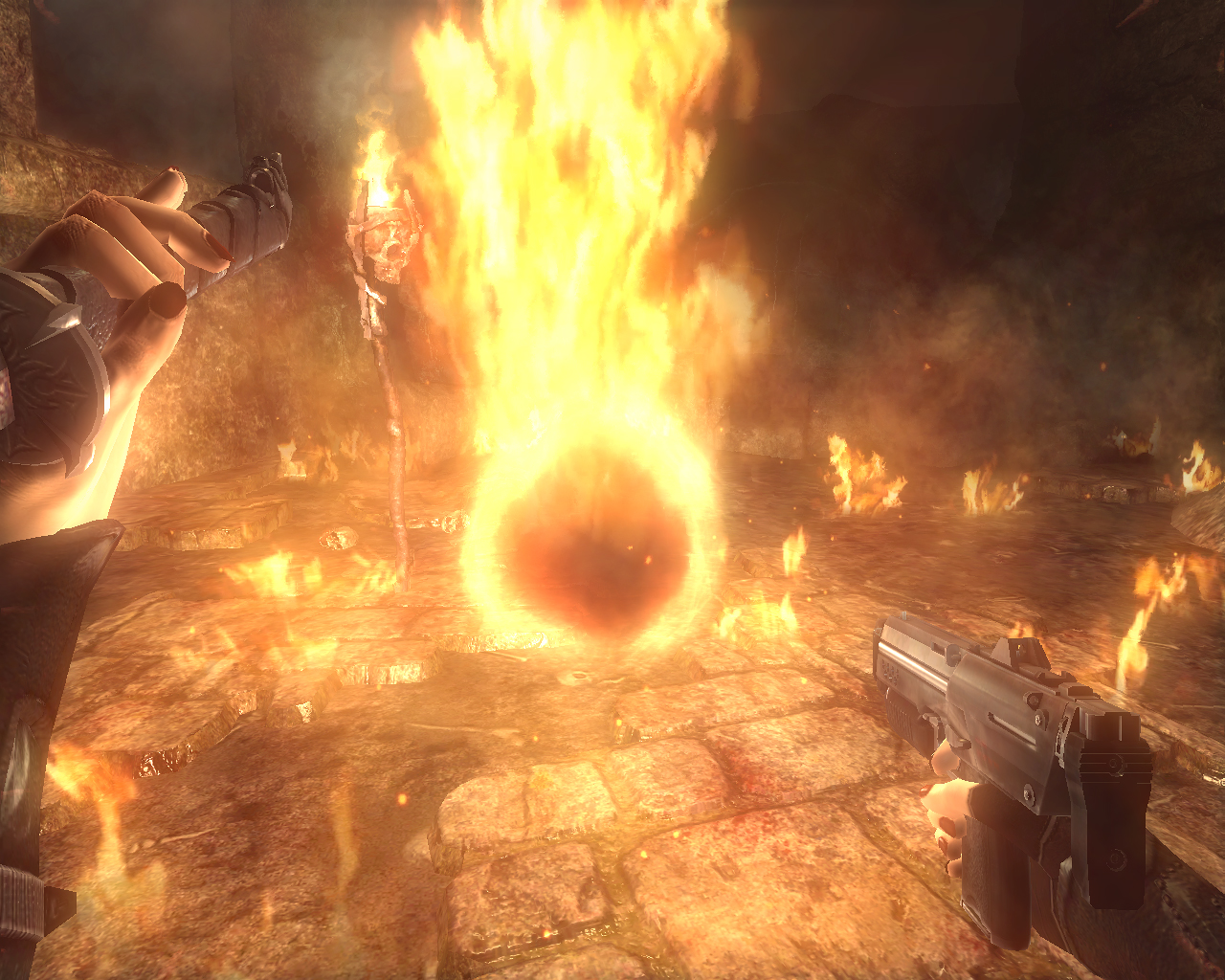 The characters are fun, I mean the banter between them can be somewhat enticing (if not slightly boring). But it would’ve been even better if you could get to know your crew on a personal level. Not many of your team members get a flurry to say—instead, they just say the obvious and occasionally say something about another character (remember that time you got hammered during my birthday party?) or something like that. Outside what I gave you up there, there isn’t much to say about the character. And when you do get into a characterization scene, it’s an un-interactive set piece which can be very boring which isn't very... interactive. Only one scene throughout my play through I really liked and it was the resting period for your squad before you go deeper in to the Roman Coliseum—you get to find out a bit about Cole, what fun.

In combat, your team will do their job… but in a very standard way, and perhaps not even in a smart way. You’ll never find a time where you’ll be up by yourself because everyone thought it would be a splendid idea to stay in the narrow corridors to fire—in the middle blocking my shot. And when the getting’s good,  the enemy start to close in… this is where all hell breaks loose. In the narrow pathways you’ll find yourself in all the time, your teammates tend to stand there like lifeless bastards waiting to get shot—it ain’t exactly in their vocabulary to move around and avoid melee combat. So let me translate this whole paragraph for you in one neat little sentence that will save you the hernia for a different game… “You get to do all the work yourself… what fun.” I’ve never met another game of which makes you compensate for your teammates (‘cept in Halo, but that’s it for me). For most of the game, you’ll end up healing your team-mates  then actually being a holy warrior throughout the game. 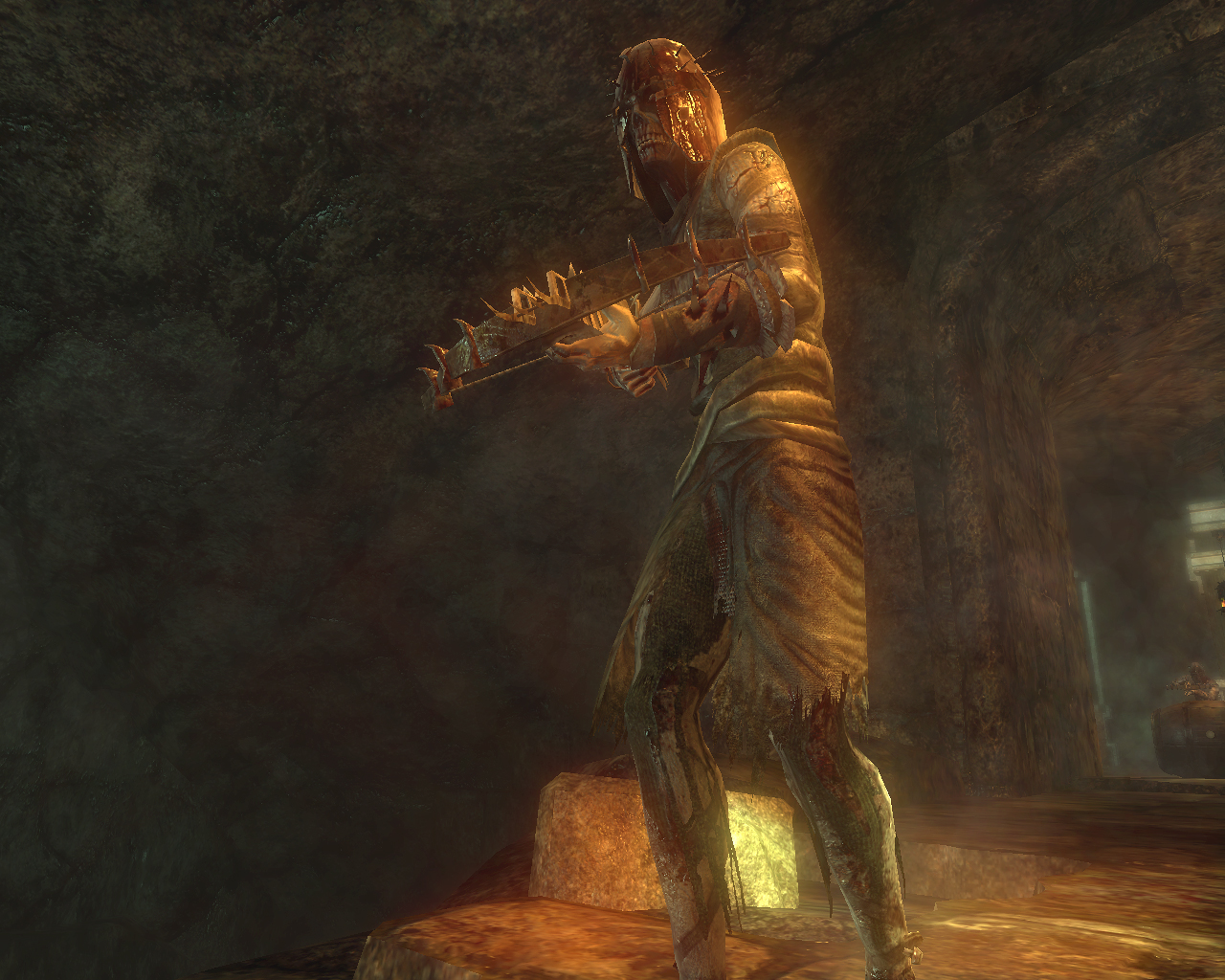 The Level Design can’t really called level design nowadays—level design is meant to harbour the gameplay in an interesting environment. So far as I’m concerned, it looks great… but the environment itself is only meant to look good, not meant to harbour the game itself. It does a piss poor job of doing so because well… it’s one cramped path all the way to the end. And when you are surrounded by suicide bombers, hard to kill melee fiends, etc… it just grows too frustrating to play the bloody game. There are a couple twist and turns if you look hard enough, and there lacks a subtle interactivity in the environment—every time you interact with the environment (blow a wall down, blow a box up, etc), it’s scripted… so it ain’t interesting. Like I said though, it all looked good. The artistic direction of each of the environments makes them all look phenomenal. Real visceral look to all of them and, well… Clive Barkers trademark horror art. We got an exuberant amount of blood, we have some classic gore piles, always fun. You pretty well have all the ingredients you need to make a great horror themed action game… supposedly.

The shooting in the game does a decent job of making itself interesting… but the fun last only a fair few minutes till you realize the one thing that’ll make you burn this game. All guns, every single bloody gun does the same thing, one just happens to be weaker than the other. It’s all done from the perspective of the person you are controlling—it wasn’t done in a tense way either. It was just sort… done, out of focus and grossly average that makes you nod in shame—please carry a bag with you at all times during play, shooting guns will make you throw-up out of the mediocrity of the shooting itself. It shames first person shooters everywhere, being this mediocre. There are different guns, but it’s only from character to character. Again, they all do the same thing, just one has a fresh coat of pain of the other one. Snipers are point and shoot, rifles are point and shoot… minigun is point and shoot, need I explain further? Perhaps the only satisfaction you get from the guns is from head-shotting one of the fiends from hell—you’ll get a really nice popping sound that will make you smile in return.

The sound is sub-par if not just downright lazy. There is something to be said about the report of each weapon and the power that they exhibit. Only a couple weapons past such a test, but that’s few and far between… for example, the sniper rifle sounds quite scary in its own right—the power it reports match quite well. The dual desert eagles sound downright pathetic… but they aren’t powerful so the wimpy report does go well with the two guns (it still makes it un-fun to shoot). The assault rifle, the carbine rifle, and my god the minigun don’t exhibit the definition of power, and as a result they sound like the wimpiest weapons in the modern world today—they make themselves out to be like the crowbar from Half-life, but even that had some self-respect and dignity. they don't sound like they have a mean punch to them, you will nod your head in shame at the weapon effects. 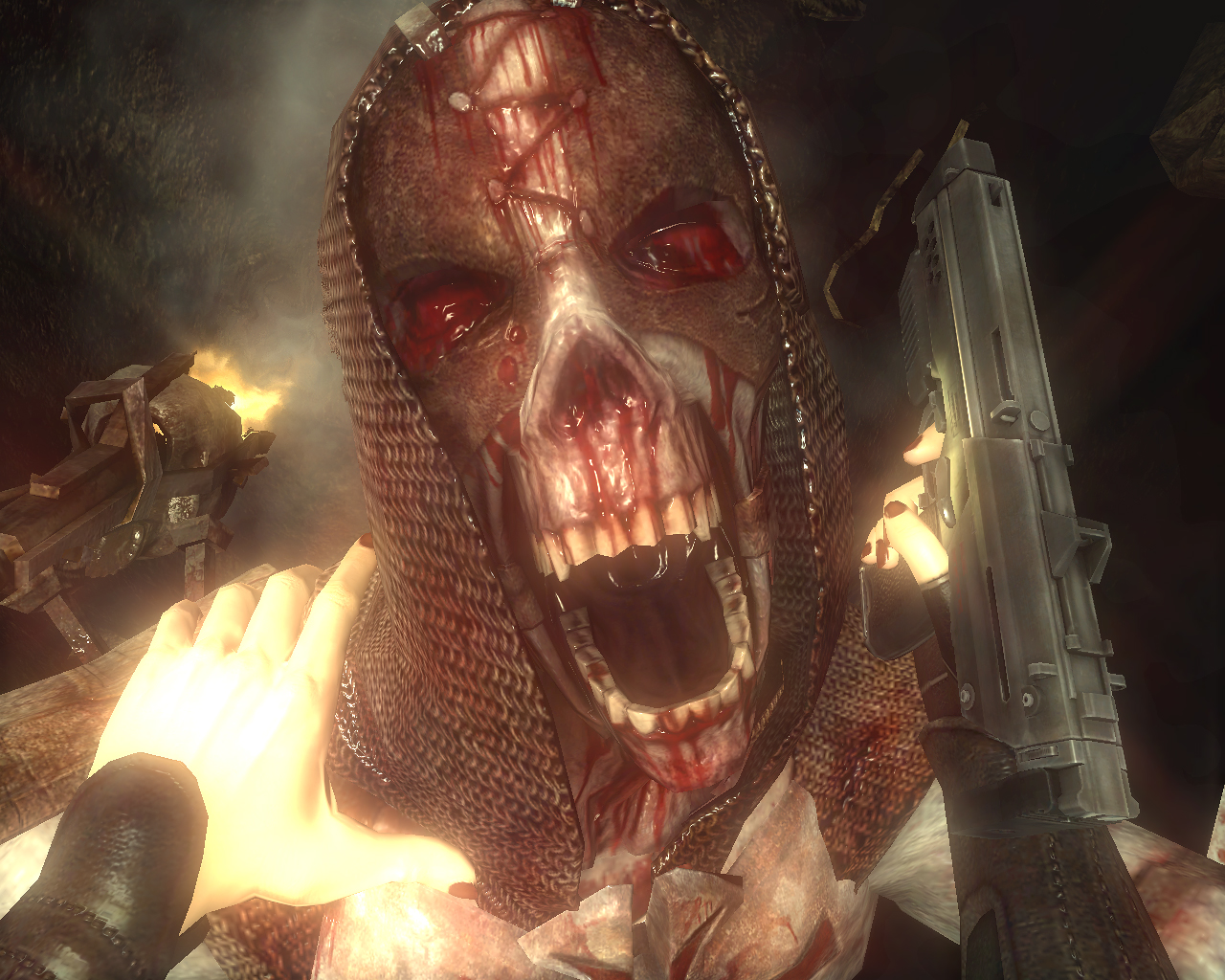 Now for another crippling hit to the shin… the voice acting. It is again sub-par if not lazy. I can’t talk much about your foes as they all sound sinister (the same). But since your team talk so much, lets devote our time to them. Some of the voices sound flat-out bad—awkward change in phrases, tone don’t match the visceral situation they find themselves in most of the time, always too matter-a-fact for their own good… the dialogue did not help at all. For some characters, they sound a tad bit over-done if anything else—an odd caricature for them with the voice to follow them (Church, Black, and Rowlings).  Only a couple voices work for the character they work on and for the dialogue they are given. Cole works out well being how innocent she is (least that’s how she’s characterized). Black and Jones are decent at best… the main character doesn’t talk much, and when he does, he sounds like he’s trying to put on his best bad boy impersonation. Delgado, the hot headed Latino, was supposed to look and sound really mean… guess holding that minigun makes you trek back time to de-hit puberty. I was shocked when I first heard him… he sounded like the teenager on Call of Duty, you know… the one who tends to screech and tear his voice into your head—not a pleasant experience indeed. The chick he's dating in the game doesn’t get by either… makes me want to punch her for what a cheap Southern impersonation she did.

There was only one reason I decided to review/Respawn for this and it was because of both the art direction and the engine running it all. It looks great for such a small studio—the visceral surroundings, combined with sharp character models, great specular on surfaces, and decent animation make for a great THX experience, nothing else. If there is one thing I can say to levy against the graphics itself… it’s that many of the environments you fight in are often way to dark to fight in—and to top that off, some environments and some rooms often are too similar to one another… it can be hard to figure out where to go sometimes—that depends if are trying to hold down an area, and lose track of what direction you came from. It may happen, so be careful.

Does It Hold Up?

Do yourself a favour and throw this game out if you have it… it really isn’t a pleasant experience and the ending of the story mode (the only mode) is absolutely atrocious. You have been warned. Unless you want to see an artistically charged game at its best… please just rent it, or better yet, just bum it off your friend if he was dumb enough to go for the game.

Should You Play Through It?

If you missed it: No

Re-play through it: No